The Benjamin Airbow is an accurate air rifle/crossbow hybrid suitable for shooters of all levels. Read our review today and find out why it’s one of a kind! 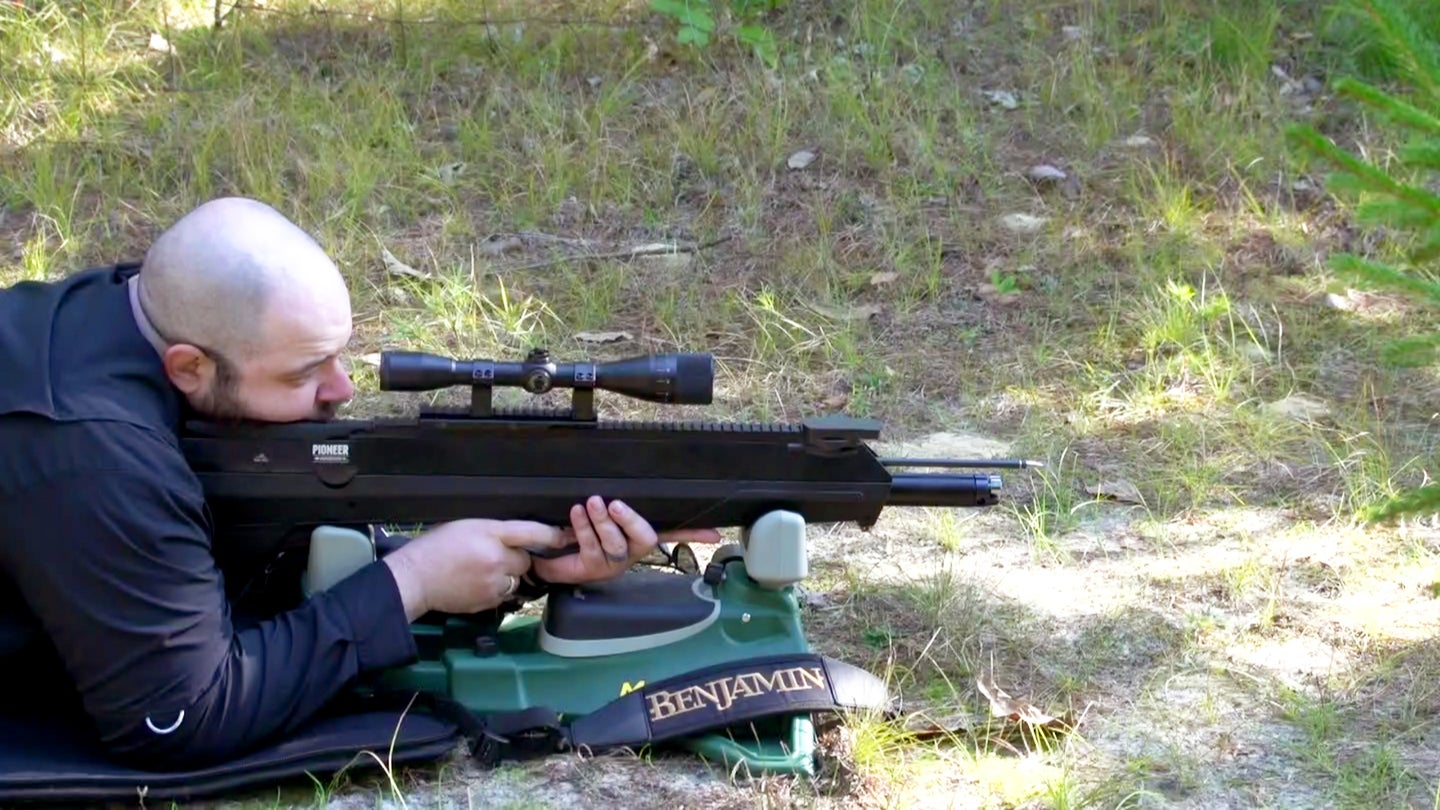 Sometimes, there is merit to building a better mousetrap. Just because something works doesn’t mean it shouldn’t be completely rethought every once in a while, considering modern technology, materials, and manufacturing capabilities. That’s what Crosman did when it released the Benjamin Pioneer Airbow back in 2016. Its revolutionary design completely rethought the mechanical action of sending arrows through the air toward a target with accuracy, and created a better way to do it.

The Airbow is a mash up of technologies that creates a unique, and fun, hunting arm. Amazon

The Airbow is a mash up of technologies that creates a unique, and fun, hunting arm. Amazon

What Kind of Air Rifle is the Benjamin Pioneer Airbow?

For centuries, a string has been used to propel arrows from the rear of the arrow shaft, whether that string be attached to a long bow, recurve bow, or crossbow. The Benjamin Airbow, instead, propels an arrow with, you guessed it, compressed air and a piston, but it does it from the front of the shaft just behind the arrowhead, instead of from a nock at the rear. This makes a huge difference when it comes to accuracy.

With its power and innovative design, the Airbow is not a range toy and is definitely built for the woods—it has, indeed, been used to tag a number of large game in states that have allowed its use during hunting seasons. The Pioneer Airbow is a sort of air powered crossbow, or arrow rifle, or arrow gun. Whatever you call it, shooting the Airbow at a target is still impressive and I wouldn’t hesitate to take it into my treestand if I could. (Note: The Airbow is not legal to hunt within every state. Check regulations before you consider taking it into the woods.)

How the Benjamin Pioneer Airbow Works

The manual of arms for the Airbow is fairly simple. First, of course, you have to fill the Airbow’s power source, a cylindrical compressed air tank that runs under the “barrel” with a pressure gauge on the front so you know how much air is left.

Simply attach a hose from the optional 4,500 psi air tank or pump to a small adapter that is then inserted into the hole at the front of the gun’s tank, just behind the pressure gauge. Slowly open the valve on the tank, and keep an eye on the gauge. Fill until you hit the 3,000 psi mark and close the valve, bleed the line, and remove the hose. You’re good to go for at least 10 powerful shots.

Keep in mind, the air isn’t used to directly propel the arrow. Instead, the compressed air is used to work a bolt-like piston, which in turn propels the arrow, ensuring a uniform velocity for every shot until the air supply gets low. This also means no air is wasted on a shot not taken, the bolt is simply disengaged.

What the Benjamin Pioneer Airbow Shoots

The Pioneer Airbow will only work with proprietary arrows. They are hollow and open at the back with a cuff that forms an airtight seal when it’s in the gun. The arrows have standard threads for field tips and hunting broadheads of all types.

The loading and firing process is simple. First, make sure the safety is engaged, and slide the hollow arrow over the steel barrel tube with the green fletching facing up, until you feel it fully seat. The front of the barrel is now up against the back of the arrowhead inside the shaft.

Then, lift the cocking lever on top of the stock—this takes about 2 pounds of force. You’ll hear a click when it’s fully cocked and the lever can then be lowered to its former position. This lever cocks the piston inside the Airbow’s stock and readies it for a compressed air burst to propel it forward and fire the arrow. Then you simply aim, disengage the safety, and fire.

To unload the unique Benjamin air rifle/air crossbow, aim it in a safe direction, lift up on the cocking handle with one hand and hold it firmly while pulling the trigger with the other, then slowly lower the cocking handle. The arrow can then be removed and the Airbow is ready for transport.

How We Tested the Benjamin Pioneer Airbow

As far as its capabilities go, the Benjamin Airbow is a much safer to use alternative to a crossbow that can be reloaded and shot again much faster and easier, even in a stand, with similar capabilities. To that end, it’s also a lot more fun at the range than shooting a crossbow.

Here’s the thing: If you don’t have multiple targets downrange, you will have to walk down after every shot and remove your arrow. You have to treat the Airbow like a modern crossbow—it’s so accurate and has so much power, that you are more than likely going to get groups so tight you’ll be destroying your arrows with follow-up Robin Hood shots if you don’t pull them first. (Yes, that’s experience talking.)

For the Airbow’s range test, I shot from seated, standing, and prone positions at 40-50 yards and the groups were extremely tight. I’m talking two inches, and it was my first time shooting this contraption. Even so, sighting in the scope was the most arduous part of setting up the Airbow. I also shot it from at the same distances from an elevated treestand with the same results.

How the Benjamin Pioneer Airbow Performed

The Benjamin Airbow was shockingly accurate inside 50 yards. I know many hunters go a bit farther these days, but that’s my max range with a bow, so that’s what I used as my baseline. As I said, with the CenterPoint 6x40mm scope and shooting prone or seated, I was getting amazing groups at 50 yards and at 25, I could put arrow after arrow in the same hole all day. I took it up into a treestand, slung on my back, and the results were the same shooting down at the bag.

I used a crossbow bag for a target, and as the specs said, the first 8 shots from a newly filled air tank were definitely full power, burying two thirds of the shaft in the dense bag. After that, power dropped off a bit, and you could hear the difference, but accuracy didn’t start to drop off until after shot 12. When shooting for fun, you can get at least 15 good, mostly accurate shots from one tank fill. If you have a SCUBA tank or something like that, you could fill and shoot the Airbow all day. In the field, two or three full-powered shots are absolutely guaranteed.

The Benjamin Airbow is built for hunting. It looks bulky in photos, because it’s so tall, but it’s remarkably lightweight and it’s only two inches at its widest point. Plus, it’s technically a bullpup design, so it’s quite short, well balanced, and very easy to maneuver in a treestand. On a sling, it carries like a light rifle.

There are no protrusions on the Airbow’s exterior that could get caught on gear or foliage and its operation is dead simple. Plus, for new hunters or aging hunters, there’s no real felt recoil and no string or cams to deal with. If you can load a rifle, you can load and fire the Airbow.

The pistol grip, safety, and scope make the Airbow intuitive to shoot for anyone who has ever handled a crossbow, rifle, shotgun, or air gun for that matter, so the learning curve is nil.

The coolest part was I could fire and reload the Airbow without getting up from the prone position and hardly without coming off the scope. Reloading in a stand was easy and it felt very controlled and safe.

Plus, unlike a crossbow, you can safely and silently unload the Airbow if you didn’t take a shot, without even wasting any air—no need to bring along a junk arrow to shoot into the dirt.

What the Benjamin Pioneer Airbow Does Best

The Benjamin Pioneer is a remarkable hunting implement and an extremely fun range toy. I wouldn’t hesitate to hunt any animal that I would hunt with a crossbow, or a high-power air rifle, with the Airbow. I’d have the utmost confidence in its accuracy and power while doing so. Plus, it’s light enough to be easily hauled into a stand or carried for extended periods of time while slung.

It’s extreme ease of use and safety features make the Airbow a great way for young hunters to get in the woods and for aging, injured, or differently abled hunters to keep on hunting. Just the fact that it’s so easy to load, even in a treestand, makes it far less intimidating than a crossbow for beginners. And everyone will have fun with it at the range.

What the Benjamin Pioneer Airbow Does Worst

There are a couple downsides, chief of which being the prices involved if you’re starting from scratch. The Airbow itself has an MSRP of $899, which is pretty hefty. It comes with three arrows, the CenterPoint 6x40mm scope (custom designed with hold points out to 75 yards), a sling, and an on-board quiver. If you want an extra pack of six arrows, that will run you $76. But you need more than that to run the Airbow.

And you have to be able to fill the Airbow’s tank somehow. If you want to do it the old-fashioned way, you can buy a hand pump and get some exercise—it will cost you at least $55 plus the cost of some adapters for what’s basically a high-pressure bike pump that will work with the tank.

The Benjamin brand 90-cubic-inch charging system cylinder works way faster, but will cost you about $383. And then you’re going to have to pay get that cylinder filled at a specialty shop, because a mechanic’s shop compressor isn’t going to come anywhere near 4,000 psi. Since you have to fill the Airbow to 3,000 psi, you need a high-pressure tank to do it.

The good news is, if you already own equipment for filling airguns or paintball guns and have a retailer near you. You pretty much have everything you need to run the Airbow, as long as you get the right adapters.

Does the Benjamin Pioneer Airbow Deliver on its Mission?

Some might argue that the Benjamin Airbow is some kind of mash up that isn’t a bow or a crossbow or a rifle, and as such should be shunned. It’s just a different version of the crossbow argument, but I really don’t care. It’s accurate, reliable, fun, and does what it’s supposed to do, and I would argue, it does it better.

Since the arrow is being propelled from the front of the shaft behind the arrowhead instead of from the rear of the shaft, there is no Archer’s Paradox, canting or other flight disturbances, which, along with the arrow velocity, is why you get such a high level of accuracy. I’d call that an improvement.