Best Bucks of the Month: December 2018

The new year is a good time to look back and take stock, but for this gallery, we’re just going... 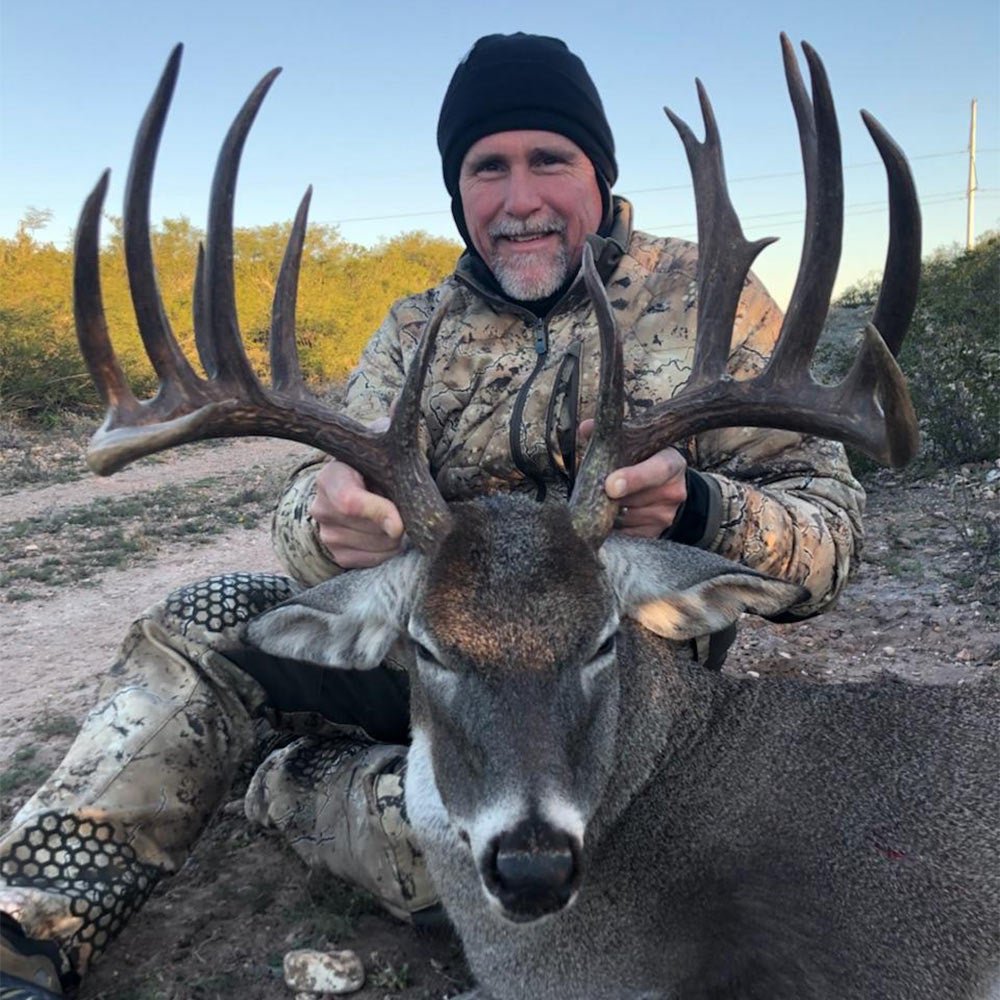 The new year is a good time to look back and take stock, but for this gallery, we’re just going to glance over our shoulders to last month to check out the whopper bucks taken in December 2018 by late-season hunters around the country. While the twelfth month never produces as many trophies as November, the quality is still top-end as evidenced by the bucks below. 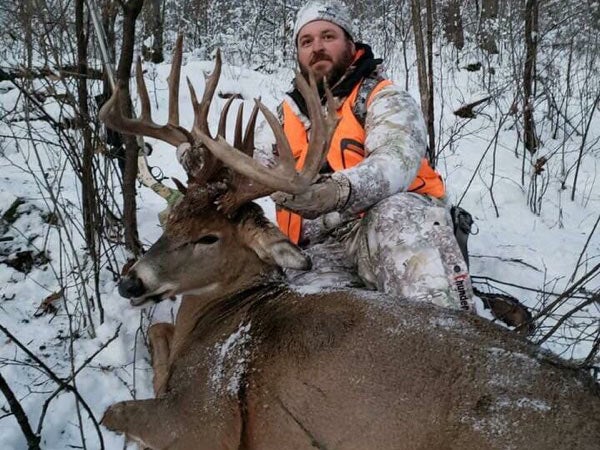 Eric Boldt hunts his family farm in southeast Minnesota with several friends, and in late October their trail cams captured a giant buck. “We had pics of him from the year before, when he was a straight 6×6,” Boldt says. “This fall he just blew up. He hung out on our farm for a bit, but then disappeared when the rut kicked in. At one point, we saw him dogging a doe on a farm at least a mile and a half from ours.” But when the rut waned and winter arrived, the giant buck returned home to hit a plot of turnips and radishes on the Boldt farm. “My buddy and I were sitting on opposite ends of that food plot on Dec. 9, the last day of the muzzleloader season,” Boldt says. “There was about 30 minutes of light left when I saw this huge deer coming out of the cedars toward me. He finally gave me a 50-yard shot, and I dropped him in his tracks. When my buddy heard my shot, he called me right away, but I was babbling so badly he could hardly understand me.” You can’t blame Boldt’s for being a little excited: His buck had 24 scorable points, an 18-inch spread, and bases over 5 inches in circumference. The monster gross-scored 219 B&C. 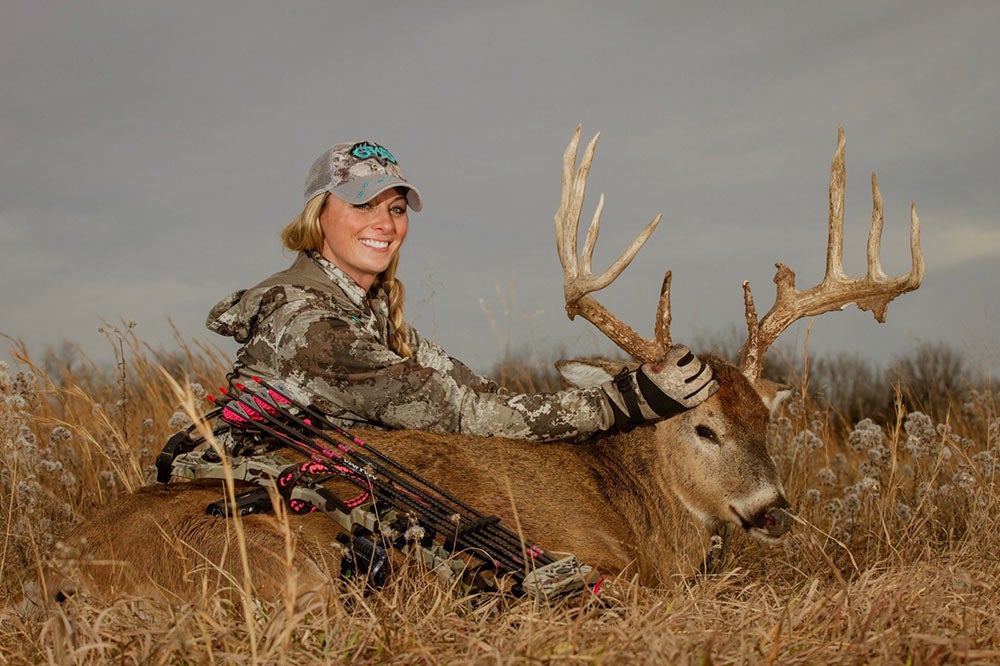 As co-owner of Wicked Outfitters, Whitney Fouts’ commitment to helping clients get their southeast-Kansas dream buck means she rarely gets a chance to hunt for herself. But when the schedule clears in December, she enjoys some occasional stand time. It was on such a hunt when a heavy-beamed mature buck dubbed “The Melted Antler Buck” made the mistake of walking past the guide on her day off. “I drew my bow and settled in, then made a perfect shot,” Fouts says. “The buck ran about 60 yards and tipped over. I was beyond ecstatic, as this was my biggest buck ever. I think the whole tree was shaking!” As Fouts walked up on the buck, she looked down on the ground and spotted on of his antlers. “Then, when I got right up to him, the other antler was laying behind him.” Both had popped off as the deer ran away after the shot. “We screwed the antlers on just so we could take pictures.” Fouts’ giant grossed 181-3/8 and sported some very unique webbing on the left beam. 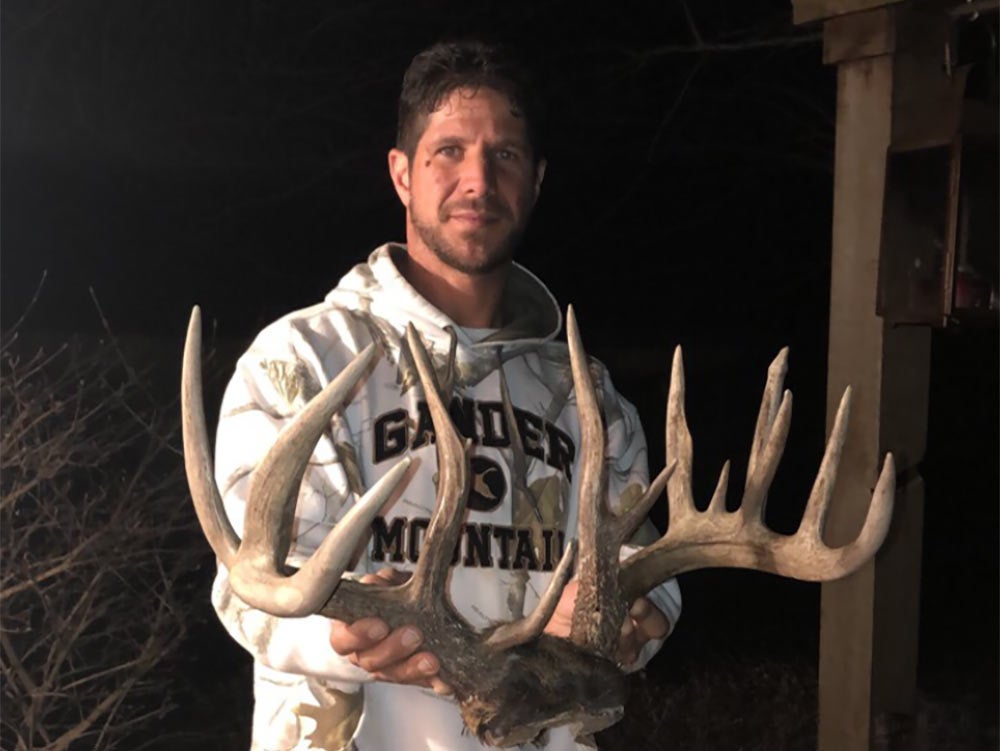 Hunter: Ben Andrew
Check out the brow tines of this Indiana trophy.

The same 27-acre patch of Indiana bottomland where Ben Andrew learned to hunt rabbits and squirrels as a boy has also produced some impressive bucks for the Hoosier State hunter. The latest example is this massive 13-pointer, a buck Andrew killed last month during the state’s rifle season. “Our property is a rectangle field that borders a creekbottom on one side,” Andrew says. “I usually sit on a washed-out bend of the creek, and as I walked in to my spot, I saw a big doe staring at me. She never spooked, so I realized she was probably pinned down by a big buck.” Andrew settled in and just kept glassing behind the doe, until the buck finally appeared, facing him. “What a sight!” he says. “I will never forget it. I had a solid rest and knew I could make the 225-yard shot.” Andrew’s aim was true, and soon he wrapped his hands around the buck’s heavy antlers. 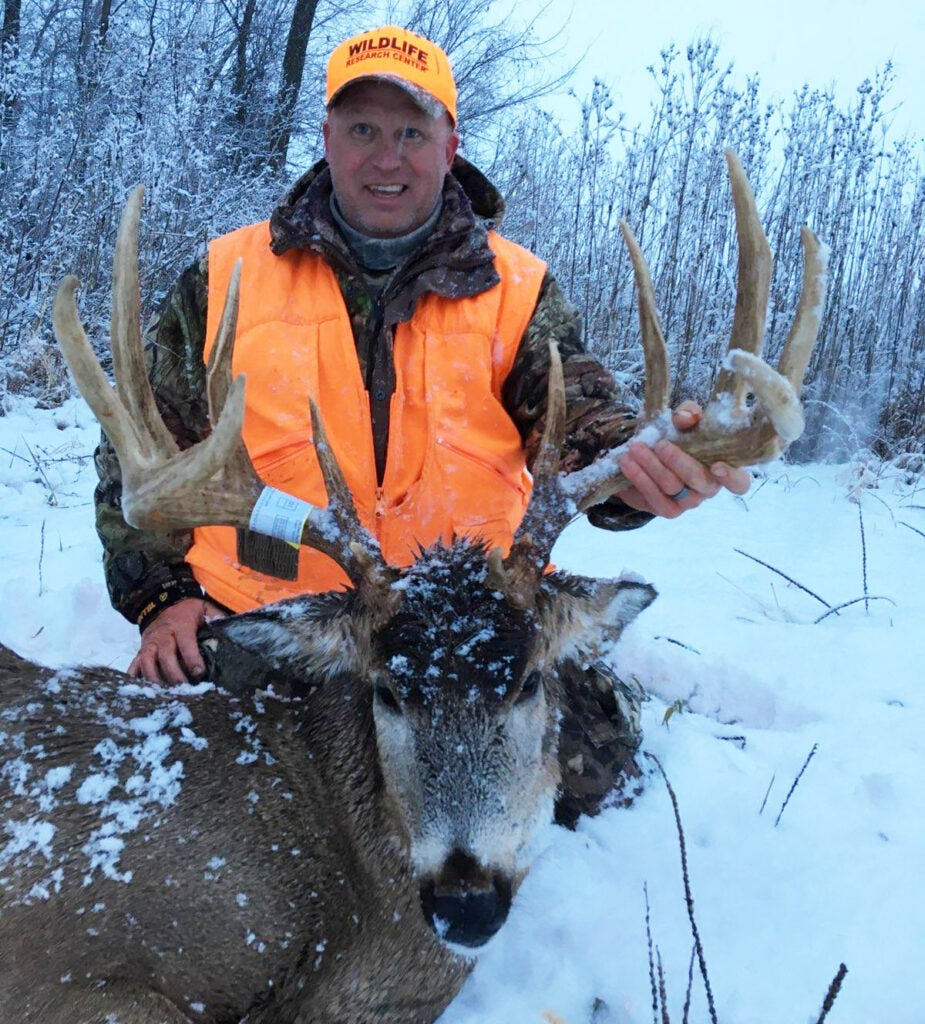 Brian Storlie, who lives in southeastern Minnesota and has taken some great bucks there, makes an annual trip across the border to hunt with friends in northeastern Iowa. “It’s a lot of grass and weeds and little patches of trees; spots where you’d expect to chase a pheasant, not a big whitetail,” Storlie says. But that’s exactly where Storlie caught up to this heavy-racked 10-point, during Iowa’s first shotgun season. The massive buck grossed 184 B&C.

South Texas ranch manager Brent Johnson was hunting with his friend John Green when they first discovered this buck years ago. “Finally, last fall (2017), I knew the deer was at least 7-1/2 years old and worth going after,” Johnson says. “John and I set up on him several times and finally had a chance. While the buck was pushing 180, he really looked like if he had one more year he might get really big. So John passed the shot.” When Johnson got pics of the buck this summer, he knew John had made the right decision. “He’d really blown up! So this year, John and I coordinated on hunts designed to kill this deer and no other; it’s hard to have that kind of patience and dedication, but he did it and it paid off. The buck scored 199-1/8 and had grown at least 15 inches from the year before. We don’t have high fences here, so it takes a lot of hard work and cooperation to get bucks old. And you have to tip your hat to the ranch owners, who had every right to go after that deer but didn’t. They felt John deserved a chance at the buck and he got it. “ 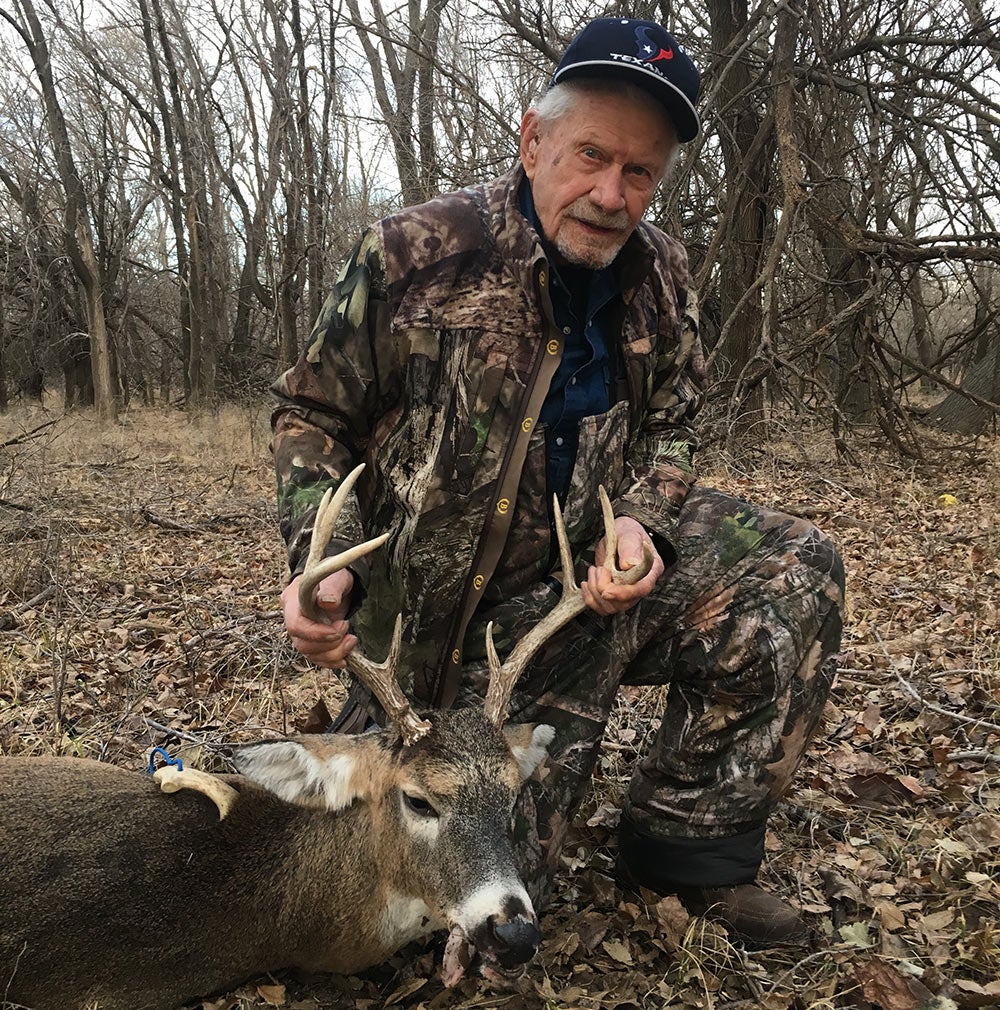 Hunter: Arlie Mathews
Mathews was one year shy of the century mark when he took this Kansas 9-pointer.

Arlie Mathews is 99 years old and still chasing whitetails. Mathews, who taught hunter safety for years and helped develop the gun range in Wichita, tagged this Kansas 9-pointer buck on the second day of a hunt he shared with his nephew, Bob Maninger. 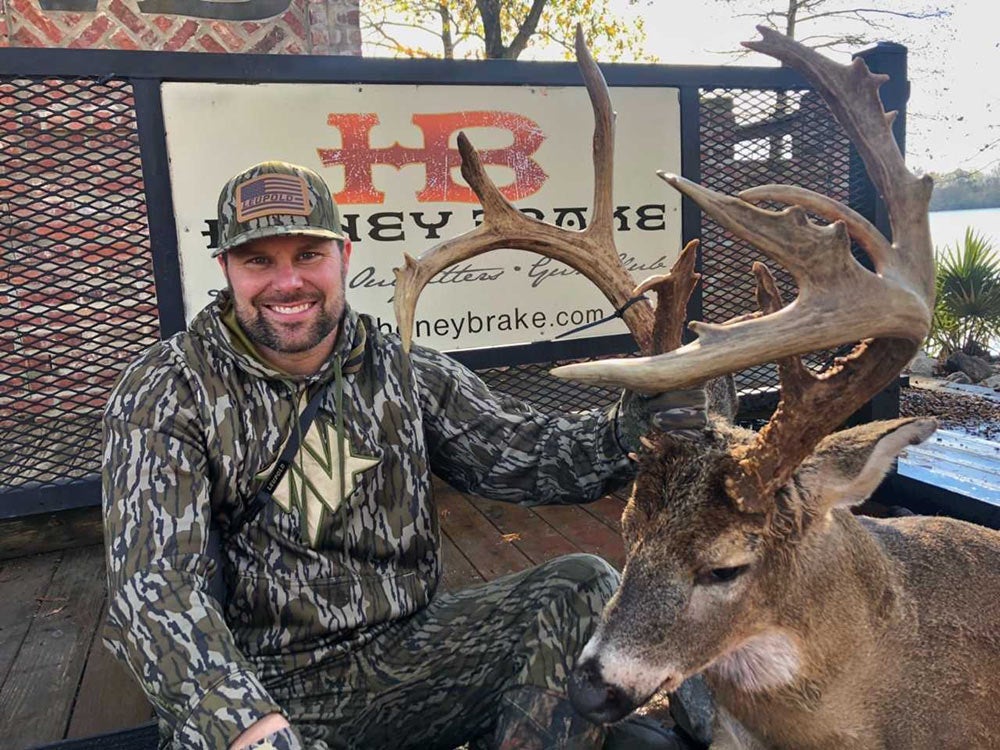 Louisiana’s Honey Brake Outfitters is best known for its world-class waterfowl hunting. But JJ Kolesar had deer on the brain when he visited as a client. Kolesar was hunting the afternoon of December 28 when a doe, followed by this mature monster, ran into the food plot he was watching. The pair ran into and out of the plot three times before Kolesar took—and missed—a 300-yard shot. Though the buck was spooked and ran off, the lure of the hot doe was too much. After a while, the buck returned to the plot a fourth time and left again, without presenting a shot. But the fifth time proved to be a charm. When the buck gave Kolesar a clear shot, he settled in and made the follow-up count. The 7-1/2-year-old swamp monster scored 171 B&C.

Beau Jensen knew the buck he called “The Big-Brow Ten” very well. The problem was, he couldn’t lay eyes on him very often. “I first passed the buck when he was 3-1/2. He grew a bunch as a 4-year-old, but at 5 he kind of flat-lined, antler wise. This year he finally grew into a giant, and I went after him in archery season several times, but he was not an easy buck to figure out. Finally, during the late muzzleloader season, he walked out with 45 minutes of daylight left, like he didn’t have a care in the world. Go figure mature bucks.” Jensen makes a point not to get caught up in B&C scores, so he intentionally didn’t put a tape to this Iowa giant. But he lauded the buck’s incredible brow tines and impressive mass.

Meanwhile, Beau’s wife and Drury Outdoors team member Dawn Jensen was chasing another monster—a big 6×5—on the same property she owns with her husband. “We didn’t know if the buck was just passing through, looking for a doe in the post-rut, or had settled in on one of our food plots,” she said. “When he disappeared for awhile, we figured it was the former.” But suddenly the buck reappeared and Dawn decided to turn her attention to that end of the farm. “We’d had a big cold snap, and December 30 was the first nice day after it broke,” she says. “I got in the stand at 2 pm, and several does were feeding by 3. Then about 3:30, a good buck appeared and when I glassed him I could tell it was the 6 X 5. He gradually fed within range and suddenly got kind of spooky, so I took the first good shot he gave me. My shot dropped him right in his tracks.” 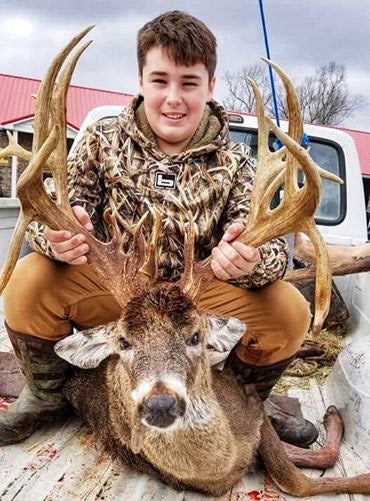 Thirteen-year-old Bo Ezell wanted to go squirrel hunting the morning of December 28, but he couldn’t find his dog. So, Bo was biding time at home when a friend called and asked if he wanted to come shoot a buck she’d spotted behind her house. Thinking he didn’t have much of a chance and the deer was probably small, Bo took his time getting ready. When he finally arrived at his friend’s house, she informed Bo that the buck was now down at the creek and led him toward the buck. Bo finally spotted the buck as it worked a scrape. “It looked like he had a big bush on his head,” Bo told the Tennessee Wildlife Resources Agency . “I got rattled and started shaking.” After missing a few attempts, Bo finally made three good shots and anchored the buck, which had 27 scorable points and gross scored 213-7/8. 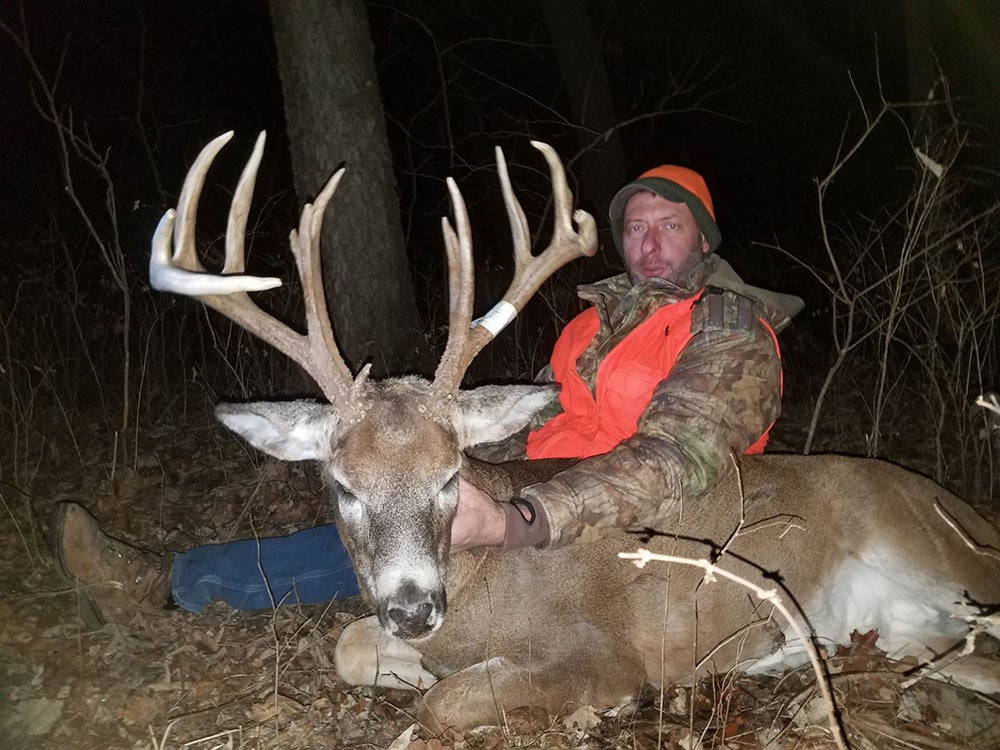 Minnesotan Casey Mundt drew a coveted late-season Iowa muzzleloader tag, and took two weeks off to make sure he’d have a chance to bag one of the Hawkeye State’s giants. “On January 2nd, I was sitting in a makeshift ground blind on the edge of the timber, and watching a field,” Mundt says. “About 4 pm, 20 does entered the field and fed past me and had no clue I was there. I saw no deer for 45 minutes. Then I could hear a deer walking slowly through the timber toward that same fenceline, so I started sliding my gun around so I could be ready in case it was a buck. I was so lucky I did, because when he jumped the fence into that field at 80 yards, he spotted me instantly! By then I’d slid the gun up and was looking at him through the scope. I could see the huge brows, and I knew he was a shooter. He took one step back, then another, and when he turned to go I put the crosshairs on his shoulder I shot. When he ran off I wasn’t even sure I’d hit him. My buddies and I looked for a bit but decided to come back in the morning when I stumbled on him, stone dead.” The 7-1/2-year-old 9-point had 26-inch main beams, 6-inch bases, and a 19-inch inside spread, and grossed 176-6/8 B&C. What a way to start the new year.