We put the year’s new flagship crossbows to the test in our annual four-day grudge match. Here’s how they stacked up 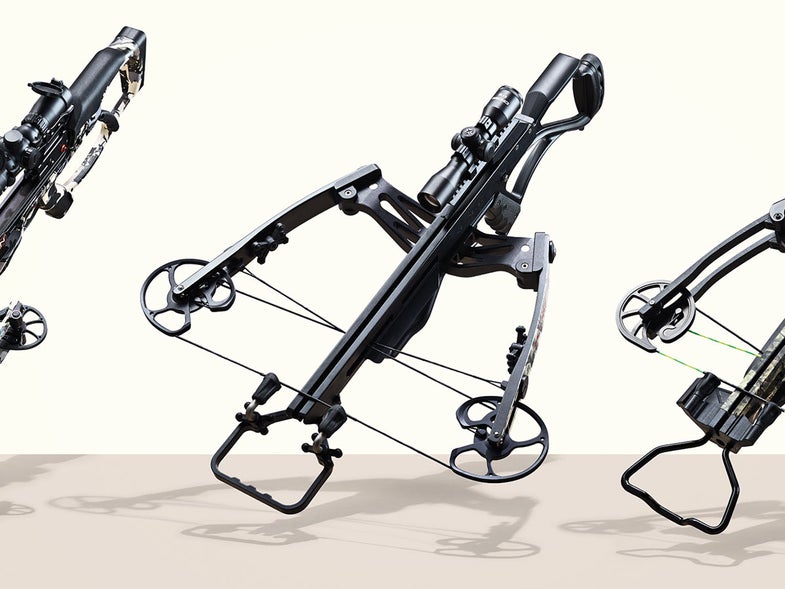 Back in March, F&S deputy editor Dave Hurteau traveled to Kentucky to meet with me and former archery pro-shop owner Danny Hinton for our annual flagship bow and crossbow shootout. As always, we spent four full days shooting, measuring, taking notes, crunching numbers, and arguing. Lots of arguing. This year, the crossbow test was dominated by a newcomer that simply blew away the competition—even though the competition was strong. The compound test was a much tighter race, with only 2.5 points separating the top three. Here’s the scoop.

After assembling, weighing (with scope), and sighting in the bows, we evaluated each for accuracy, speed and energy, noise, handling, fit and finish, trigger pull, cocking effort, and safety. For accuracy, we took the average of two three-shot groups shot from a Lead Sled rest at 25 yards into a Rinehart X-Bow Bag target. We measured speed with a chronograph, using factory-provided bolts and field points, which we also weighed for kinetic-energy calculations. We gauged noise via a tripod-mounted decibel meter, and trigger-pull weights with a Lyman trigger scale. We scored each category on a 1 to 10 scale and doubled the key ones of accuracy, power, and handling—for a total possible score of 110 points. Prices shown are with factory-provided accessories as tested.

Best of the Test: Ravin R15

Ravin’s R15 is unlike anything we’ve ever tested. The bow’s HeliCoil technology allows the cams to rotate a full 340 degrees when the limbs are loaded, resulting in an extremely compact package (just 6 inches axle to axle when cocked) that is Hammer-of-Thor powerful. The bolt is supported with a traditional nock at the rear and a rest up front, so it has no contact with the bow’s barrel. Cocking the Ravin must be done via the Versa-Draw system, which works like the ratcheting winch strap on a boat trailer. It’s slow and loud—but requires just 12 pounds of effort and can be decocked almost as easily. Our test bow punched one-hole groups and finished at or near the top in all categories.

Scorpyd quietly builds some of the most impressive crossbows on the market. Company founder Jim Kempf pioneered reverse-draw crossbow technology, and his bows usually dominate the power portions of our test. The trade-off is that they’re big and bulky. With a 424-grain bolt fired at an average 430 fps, the Orion took top honors as this year’s most powerful crossbow—and yet, with a redesigned, fixed-position stock, it’s 1⁄2 pound lighter and much easier to handle than any Scorpyd model we’ve tried. Ours had an excellent 2-pound 12-ounce trigger, and it shot .73-inch groups. The new grip is comfortable and will accept 1911 pistol-grip panels, so you can trick your bow out to taste.

Recently, the trend in crossbows has been to sacrifice some power for ease of use and handling; the reverse-draw Vortec RDX is a great example of that philosophy. Though not the lightest bow tested, it was perfectly balanced, and a crowd favorite in the handling department. It had an excellent 2-pound 11-ounce trigger and averaged 1.19-inch groups. The bow doesn’t produce blistering power or speed, but it’s still plenty for any critter in North America. It was also one of the quieter bows we tested. Best of all, the Vortec achieved a top-three finish at less than half the price of the winning Ravin and $500 less than the second-place Scorpyd, making it a shoo-in for our Best Value award.

The fastest bow Barnett has ever made, and the third fastest in this test, the Ghost 420 was the only model besides the Ravin to shoot one-hole groups. It had an excellent trigger and wasn’t too noisy. But all that power comes at a cost. With such a long powerstroke and heavy draw weight, this was one of the most difficult-to-cock crossbows we’ve ever tested.

Well balanced, easy to shoot, and plenty fast, the Carbon Phantom has the perfect fit and finish we’d expect from TenPoint. It averaged 1.23-inch groups, which didn’t win the test but is certainly acceptable. Aside from being a touch loud, the Carbon Phantom didn’t do much of anything wrong—but aside from how it looks, it didn’t dominate any categories, either.

A recurve crossbow’s heavy limbs traditionally make it loud and difficult to cock. The Micro Suppressor is still fairly demanding to cock, and it was the slowest bow in the test. But thanks to Excali­bur’s new Sound Deadening System, it tied as the quietest. It had the best trigger in the test and perfect fit and finish. Ours averaged 1.8-inch groups.

Going by the numbers, the Katana 360 is forgettable in a field of high-performance compounds. But it’s designed to be easy to handle and use, and it succeeds on that front. It’s about the easiest crossbow we’ve ever cocked with a standard rope, and it’s one of the few compounds that can be easily decocked. It tied for the quietest bow in the test. Ours shot 1.13-inch groups.

A more powerful version of Browning’s 2016 debut into the crossbow market, the OneSevenOne is fast, but it didn’t raise eyebrows in a year with multiple 400-plus-fps bows. The test bow produced 1.16-inch groups and looks sharp with those Buckmark logos. Yet, it was a little loud and the trigger, though crisp, broke at a heavy 6 pounds.

Were you to cock and shoot the MXB-Charge without first looking at the specs (like we did), you’d never know it was a 225-pound bow. It’s easy to cock, thanks to its short power­stroke and Mission’s Smart Guide Slide technology. But those heavy limbs produce impressive speed, and our bow shot 0.6-inch groups. It lost points primarily in handling and fit and finish.

The Swat is a bullpup design with two guards on the stock that compress the string and keep it from hitting you in the face. Though our bow was fairly quiet and produced impressive 0.67-inch groups, we docked points due to the poor trigger and the loading procedure, which all but forces you to hold the arrow by the broadhead while sliding it into the covered barrel.

This package has few frills, but it comes with quality accessories and all the performance a whitetail hunter needs.

A fast and powerful compound with a good trigger. It’s surprisingly compact and easy to handle.

→ All About the Balance

Balance is a crossbow marketing buzzword, and the difference between a bow that’s well balanced and one that isn’t is immediately noticeable. Traditional compounds with long powerstrokes often feel front heavy. Short powerstrokes cost some speed, but they handle nicely. Reverse-draw bows, which put the weight of the limbs in the center, are the best balanced of them all. Of course, no crossbow will point like your favorite shotgun because crossbows are all still bulky contraptions—but they’re definitely getting better.