If you’ve read the November issue of Field & Stream, you know that whitetails editor Scott Bestul says you got... 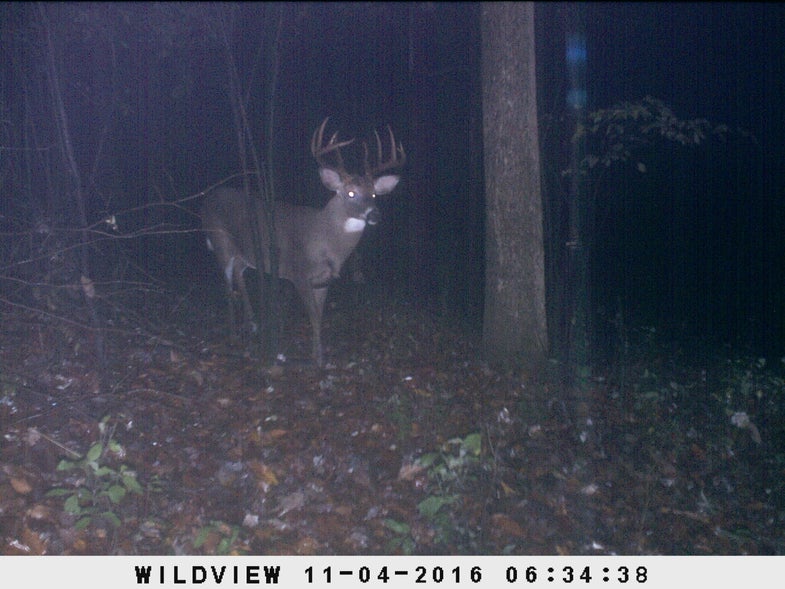 The author's trail-cam captured this buck in the woods of east-central New York. DaveHurteau
SHARE

If you’ve read the November issue of Field & Stream, you know that whitetails editor Scott Bestul says you got to be in the woods today. If you’re reading this on your phone in a treestand, smart move. If not, you need to get out there now. I did my part and hunted east-central New York this morning, as well as last night—and had two of my best sits of the year.

I’m not exactly sure if bucks are coming out of lock-down or if peak breeding is a little late this year. But what I can say for sure is that the deer woods are on fire. Good bucks are chasing and cruising; does are running scared; and fawns and yearling bucks are just lost. I passed a decent buck twice because I’d seen better ones just out of bow range, including the one in the trail-cam photo above.

The weather is going to be a little all over the place across the Northeast during the next few days. The northern half of the region will be a bit more stable with daytime highs in the 50s (and even 60s tonight in areas), and lows well down into the 30s, with things cooling off progressively through the weekend. This will continue a string fairly cold, crisp mornings of the sort where you expect to see shooter bucks cruising. Although this evening will be a little on the warm side, my group here in NY has seen better overall movement then, despite the higher temps. Farther north, Randy Flannery of Wilderness Escape Outfitters in Maine reports that mature bucks are up and chasing there, too, and he expects good movement today and into the weekend.

The southern half of the region will be much more affected by the big cold front that’s sweeping across much of the country. Friday highs in the mid-60s to low 70s and lows in the 50s will plummet by roughly 20-degrees on Saturday and Sunday, with strong winds. Although it will be warm, don’t miss this evening’s hunt if you can go, as the calm before a storm can spur good movement. The weekend should be even better, and I’m betting that the wind will not hamper lonely bucks. If you’re just going by the weather, though, the best of it will probably be Monday, when the strongest winds will have subsided and it will still be good and cold.

Tyler Johnson with Quaker Neck Gun Club, who runs hunts in Chestertown, Maryland, says that while bucks have been chasing, the warm weather has slowed daytime activity. “It’s a little hard to tell whether it’s the weather or lock-down,” he says. “We’re seeing some good bucks really early in the morning—sometimes too early to shoot—but most of the daylight stuff has been in the afternoon as does come to feed.” Once the weather cools off again this weekend, Johnson expects good things. “Colder temperatures will kick that daylight movement right back in.”