5 Keys to the Best Ladder Stand Setups for Deer Season

When they're put in the right place, these comfortable hides are excellent tools for bowhunters 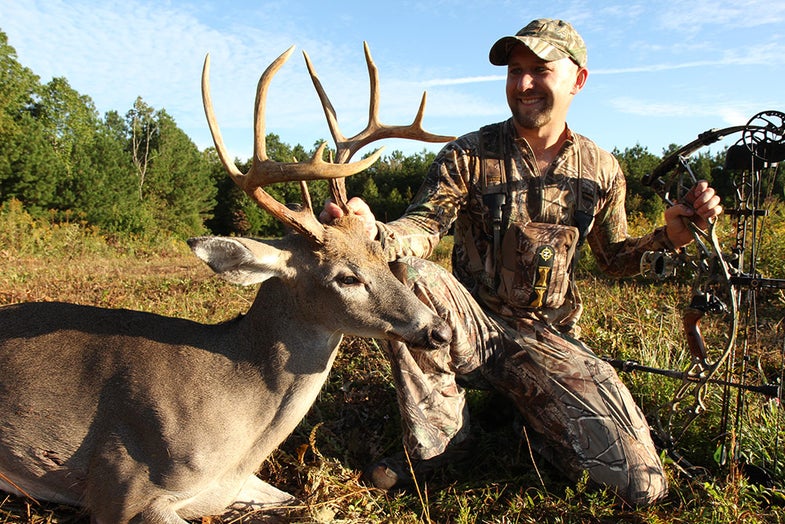 The author with a nice 10-pointer he killed from a 15-foot Wal-Mart special ladder stand. Will Brantley
SHARE

Ladder stands are like the minivans of the deer woods. They’re functional and comfy; you just don’t want your buddies knowing you hunt from one. Personally, I’d rather bowhunt from a lock-on stand 20 feet in the air, or higher, than anywhere else. But for the past several years, I’ve found myself in a ladder stand as often as not.

One reason why is because my wife, Michelle, bowhunts nearly as much as I do. She also prefers lock-on stands. But several years ago, she was involved in a car accident that left her with lasting hip damage. She’s had surgeries, injections, physical therapy, chiropractic work, you name it. She’s an elementary school teacher, on her feet all day, and mostly manages through it. It definitely could’ve been worse. But certain things—like swinging her legs into a lock-on—cause her a lot of pain, and that’s no fun. So we’ve made adjustments to our hunting strategy.

We do most of our hunting on family ground that we’ve managed and hunted for years, and we’ve learned where our stands need to be. We have sets for every wind; stands on food plot edges and funnels, oak ridges and watering holes. Many of these sets are ladder stands that are 15 to 18 feet high. Just about anyone can get in and out of them quickly and quietly. They’re safe. And I must admit, compared to the floor space of the average lock-on, they’re pretty danged comfortable, too. Michelle has killed big bucks with her crossbow from 15-foot ladder stands the past two years in a row. I arrowed the 10-pointer in the photo above from one of those same stands a few years back, too.

There’s been a learning curve for me, though, to figure out how to set these stands for bowhunting. No question, it’s easier to get busted in them compared to a lock-on. But as I look at the common denominators of the best setups, there are a few other things that stand out.

It seems obvious, but most ladder stands are not hidden adequately. Think of them as elevated ground blinds. I like sprawling limbs above a stand platform, and plenty of cover from the ground up. For some sets, that’s a double- or triple-trunked tree. For others, it’s a big cedar or several leafy saplings growing near the tree base. I also want multiple pieces of cover—extra trees, cane thickets, grown-up field edges—between the stand and the best shooting lanes. Our stands are rarely facing directly at the best shooting lanes; instead, they’re offset so that the lanes are to the side or, in some cases, slightly behind the tree.

Speaking of those lanes, they are small and carefully created. Rather than fell a whole tree to open a path, for example, one of us will climb into the stand and direct the other to cut away smaller, specific limbs, often with a pole saw. In stands where deer are going to be close before ever seeing them, the best shooting lanes are cut for sitting shots. We wrap camo netting around our stand platforms prior to the season, and I’ll frequently haul in a bundle of brush and zip-tie it to the stand, along with limbs of other trees nearby to break up outlines.

We set three of our best stands on ravine edges (two of those three stands accounted for all the buck tags filled, mentioned above). You sneak up the edge of the ravine, to the base of the ladder, and crawl in virtually unseen. One of those stands is on the edge of a food plot, and we’ve actually crawled in and out of it, undetected, while deer were in the plot. Ravines, creek beds, and thick field edges can all help mask your approach and exit, and they’re especially important for a long-term ladder stand setup.

The ravines I mentioned serve another important purpose: they discourage deer from getting behind the stands and downwind. Ravines aren’t always available, though. Two of our other good stands are set on thick ditch rows between fields. We sneak in from the rear fields—which are fallow fescue and broom sedge—and up into the stands, which face food plots. Sure, the deer will walk through the fescue fields on occasion, but for the most part, those fields are “dead space.”

What about a stand deep in the woods? I’ve had good luck by cutting a few small trees in the off-season and blocking the trails immediately behind the tree. I might still have deer approach from behind me, but if I don’t hear them coming, at least they don’t stop directly under me and stare up when I first see them.

Even with all the precautions, some setups don’t work out. One of the beauties of a lock-on or climber is the mobility. Moving a ladder stand is a hassle. But if a deer looks up and picks you out when you’re sitting still, it’s a problem. And if that happens more than a time or two per season, it’s time to think about moving the setup. Virtually all of our stands have been moved at least once over the years. Some of them, we’ve moved three times. We rarely move them more than 30 yards—after all, we’re in the area for a reason—but a slight adjustment can make a difference in getting a shot or not.

Playing on your phone. Swatting mosquitoes. Practicing drawing on deer you don’t plan to shoot—all no-go moves from a ladder stand. Pretend like you’re turkey hunting. Every single movement you make, especially if a deer is in sight, needs to be planned, slow, and deliberate. A ladder stand can seem like a beginner’s tool. But in this regard, they will help make you a better hunter.

If you’re going full minivan, you might as well get the Chevy Astro. Thinking on those lines, if you’re looking for maximum comfort from a ladder stand, I don’t think you can beat this one. Millennium stands tend to be on the heavy side—this one weighs 104 pounds—but they last forever, and are built to be secure. With a wide, circular platform and rotating seat in the middle, you can shoot 360 degrees from this one. The seat is removable, too, so you can keep it out of the weather in the off-season. It also comes with an optional blind frame. We outfit deer hunters in the fall, and this stand is a fan favorite for all-day sits, year after year. But if you’d like to do more research, check out some other fantastic ladder stands here… —W.B —W.B.