The Best Gear and Sprays for Repelling Mosquitoes and Stinging Insects

Because nothing can ruin a hunting, fishing, or camping trip quicker than a swarm of skeeters 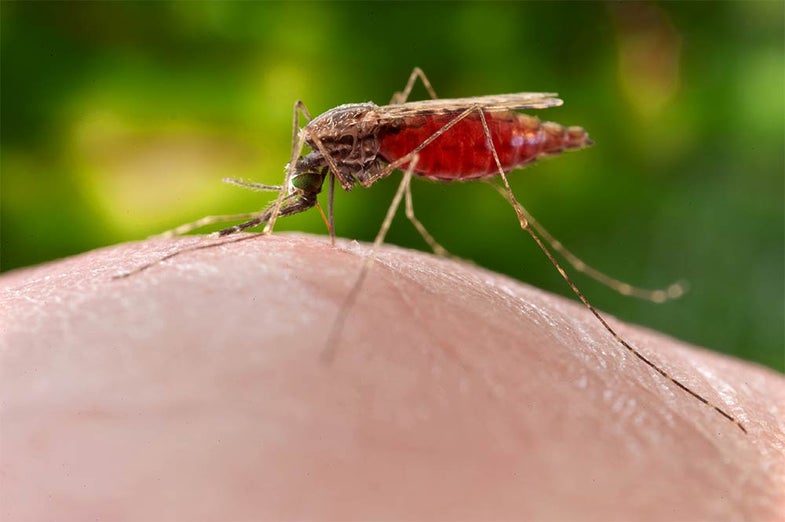 A mosquito goes in for a meal. CDC/ James Gathany
SHARE

I’ll say this for mosquitoes: At least they have manners. They announce their arrival with a zither-like buzz. They don’t dive in for a kamikaze attack, but hover delicately for a moment, as if they’re deciding whether or not you deserve a pass. Even when they bite, it’s a quick nip. It’s not like it leaves a chigger’s welt or a horsefly’s gaping wound. You swat, you itch, it goes away. There’s nothing really to suggest that you might soon curl up in near rigor mortis with Zika, West Nile, Dengue, or the Chikungunya virus.

The biting flies, on the other hand—deer flies, horse flies, black flies—are horror movie slashers and gnashers. Unlike ticks and chiggers with their highly evolved surgical mouthparts, biting flies simply rip open a piece of tasty flesh with scissor-like oral appendages and get a few quick licks in before your hand arrives in its futile attempt to smash the little sucker.

That’s why fly bites hurt. There are there for the meat. Biting flies will ruin a picnic, hunt, fishing trip, and dog-training session. And they’ll flat out suck all the joy and relaxation from a frog-gigging trip. Don’t let it happen.

The weave on this jacket works like mosquito netting. Bug Tamer

There is cruel humor in wearing one of these ingenious mesh jackets. The mosquito mesh is fixed to an open weave of netting like a fish net. Mosquitoes can land on the mesh, but that second layer of netting prevents their proboscis from ever touching skin. You’ll almost feel sorry for the buggers, and the material turns back biting flies and no-see-ums, as well. In hot weather, the Bug Tamer technology lets so much air move through the fabric you can wear nothing more than a t-shirt and shorts and be completely camouflaged and bug-proof. Also available in pants and gloves.

This shirt is a mosquito shield. Amazon

Canadians know what they’re talking about when they’re talking about black flies. Hunting and fishing in parts of Canada can be a masochistic endeavor at times, and this Ontario-born staple has earned its stripes on canoe trips through the boreal and tundra regions. The lightweight nylon fabric is a 100-percent barrier to flies and mosquitoes, and a cord lock at the waist keeps the creepies from crawling under the jacket. Perhaps the coolest feature is the slick face mesh, fine enough so you can see through it and outfitted with twin zippers so you can drop the entire face mesh down, or just crack it like a window when the hordes are truly horrible. The whole shebang fits into its own zippered pouch.

These pants are treated with Insect Shield to repel mosquitos. Rail Riders

Rail Riders makes a line of tough-but-light clothing that’s all the rage in the adventure racing world. These bush britches have all the rugged DNA of the brand—a reinforced seat, knees, and ankles, quick-drying ballistic nylon cloth, zippered pockets—including a nifty slanted cross-quad pocket design for on-the-go access—and articulated knees for hiking comfort. But it’s the Insect Shield treatment that makes the mosquitoes fear to tread. A proprietary permethrin formula bonds to the fabric, and repulses mosquitoes, ticks, flies, chiggers and mosquitoes for 70 launderings. My pair has lasted through four hard seasons. They’re my favorite pond-fishing, frog-gigging, shooting-lane-clearing pants.

Few inventions have bettered the quality of life for humanity more than the Thermacell. Maybe Spotify, but that’s about it. Instead of slathering repellant on your person, or wearing defensive clothing, the Thermacell apparatus creates an approximately 15×15-foot zone of atomized insect repellant all around you. A small coil, fired by a compact fuel cartridge, heats a mat impregnated with allethrin, a synthetic form of a natural repellent found in chrysanthemum plants. The results are nearly miraculous. Most Thermacell products are powered by the proprietary fuel cartridges, but the new Radius runs off a rechargeable lithium battery. That means you can check it in airline baggage and use it at any altitude—two major upgrades from previous versions.

For tender types who could never bring themselves to a good dousing of DEET, Picaridin is a godsend. Sold in the U.S. only since 2005, it’s a synthetic repellent that won’t irritate your skin or eyes, doesn’t smell like a dead possum that’s been stewed in turpentine, and won’t melt your tacklebox or camera housing. But Picaridin has found to be as effective as DEET in similar concentrations. Its EPA registration data suggest that a 20-percent concentration is effective against mosquitoes and ticks for 8 to 14 hours. By which time it’s probably time to think about another application of sunscreen, as well.

Read Next: The Best Clothing, Chemicals, and Sprays to Prevent Tick and Chigger Bites

A dousing with this spray will keep mosquitos away for hours. OFF!

This is the old standby, an aerosol about as modern as a Willys Jeep. And just as capable. The 25-percent DEET formula is strong enough to keep mosquitoes at bay for about 8 hours, but just shy of strong enough to take the paint off the door jambs. There’s nothing high-tech about the aerosol delivery, but there’s something good to be said about being able to stand in one spot, squint your eyes, and cover your entire body with the same stuff soldiers used in the jungles of Vietnam. Just don’t lick your lips for a bit.