There’s no shortage of tactical stuff at the 2018 SHOT show, but if there’s a general trend in new ammo...

There’s no shortage of tactical stuff at the 2018 SHOT show, but if there’s a general trend in new ammo this year, it’s a growing number of munitions purpose built for precision shooting at distance and better engineered for hunting. We have new cartridges and loadings designed to help you hit way out there via ever higher ballistic coefficients, loads to help your tactical platform succeed in the hunting fields, and the revival of rounds thought to be extinct. In shot shells, both more is more and less is more, with hard-hitting heavy metals and low-recoils loads.

The Valkyries, you may recall, were Teutonic warrior ladies who rode hither and yon hacking people to pieces and screeching horrible music by Wagner. The 224 Valkyrie is a dedicated AR cartridge that comes in in loadings for competition, practice, medium game, and varmint hunting. It’s a very small round with hardly any recoil or report, but in its target loading, it’s good out to 1,000 yards (and more, if you’re enough of a shot), which badly outranges the .223. When you look at how small the Valkyrie is, you’ll be tempted to say, “Oh ho, what can you do with that?” Which is what I said a couple of years ago when I saw an F-Class shooter with a wildcat that was very similar to the Valkyrie. What he did was put 25 rounds into a teacup-sized bull’s-eye at 600 yards. I know because I pulled the target. Price depends on loading. Federal Premium —David E. Petzal 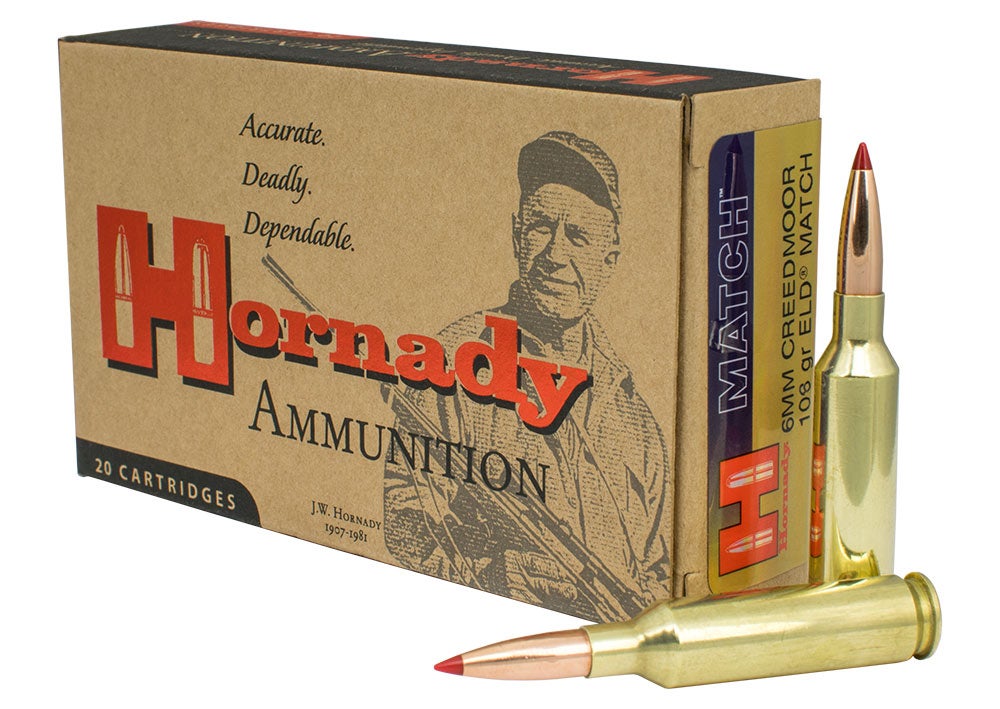 This is another case where the wildcatters got there first. It begins with the stupendously popular 6.5mm Creedmoor, which is then necked down to 6mm, dropping the bullet weight to a little over 100 grains, and thereby reducing the recoil, which is the object of the drill. A 6mm bullet of this weight is very long, has a very high B.C., and stays supersonic out past 1,000 yards. Staying supersonic is the key; when bullets drop below the speed of sound they destabilize and lose their accuracy. As loaded by Hornady, this 6mm will dramatically outrange both the 6mm Remington and the .243 Winchester. Available in 108-grain Match and 103-grain Precision Hunter loadings, starting at around $30 per 20; Hornady —D.E.P. 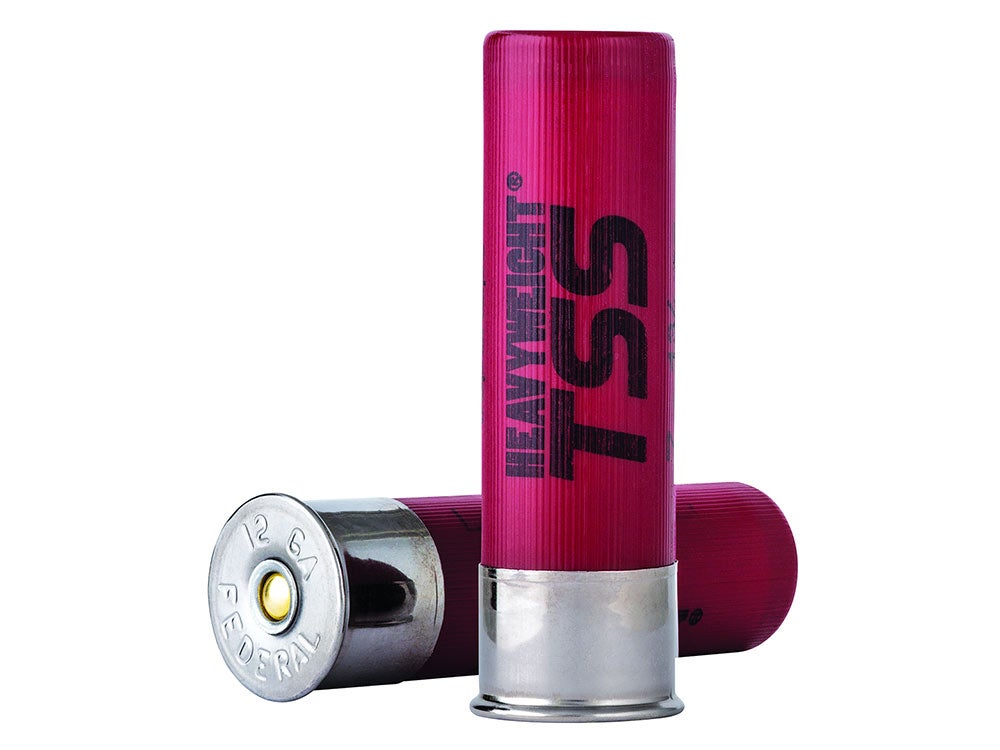 Federal’s new Tungsten Super Shot turkey loads deliver dense long-range patterns the likes of which you’ve never seen. TSS is so dense that No. 9 shot has the same penetration as No. 5 lead, meaning you can sling payloads of up to 900 lethal pellets at distant turkeys, or downsize to a 20 gauge or even a .410 and still have plenty of pattern density for normal-range shots. Loads in 12 and 20 gauge feature Federal’s FliteControl Flex wad to give tight patterns through any choke. From $6 to $10 per shell, depending on gauge; Federal Premium —Phil Bourjaily

Sig Sauer has added new hunting loads to their ever-growing line of ammunition. All of their new HT offerings—including .223 Rem, 6.5 Creedmoor, .300 Blackout, .308 Win., and .300 Win Mag—use a premium all-copper bullet engineered to expand to a frontal diameter of at least 1.8 times the original caliber size. Each is loaded in a nickel-plated case with flash-retarding propellants to reduce visible signature when shooting in low light. Starts at $26 per 20; Sig Sauer —Richard Mann 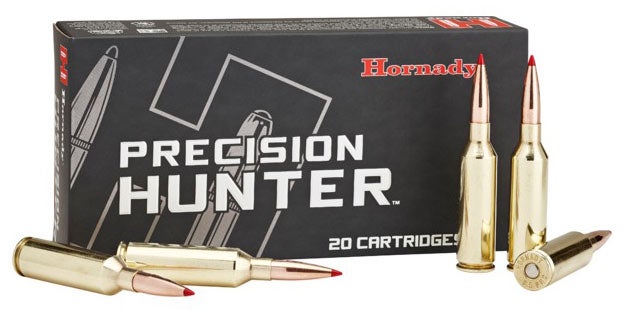 Taking shots at long range is the fastest-growing shooting discipline right now, and for that task, the new 6.5 PRC (Precision Rifle Cartridge) cartridge from Hornady offers what is in my opinion the best balance of power, recoil, and size, of any commercial cartridge on the market. The cartridge case was built from the ground up specifically for distance and is loaded with the highest ballistic coefficient bullets available. It will drive a 143-grain Hornady ELD-X bullet to 2,960 fps, with more efficiency than any of the previous 6.5 caliber cartridges on the market, including the wildly popular Creedmoor. And that’s saying something. Starts around $38 per 20, depending on loading; Hornady —R.M.

Aguila ammunition has expanded its Minishell lineup for 2018 by adding 8 and 9 shot to the existing buckshot, slug, and 7½ shot offerings. Most people look at these 1 ¾-inch Minishells and ask. “How many fit into my Kel-Tech?” But they have more to offer than mere firepower. Actually, they have less to offer, but very much in the “less is more” sense. At 1,200 fps and with only 5/8 of an ounce of shot, Minishells are practically recoiless and are noticeably quieter than standard target loads. Yet they’re still powerful enough to break clays. That makes them a great training load for new shooters or anyone who hates recoil. Minishells won’t cycle in semiautos or even some pumps, but in a break-action 12, they are a joy to shoot. New for this year, they come in 25-round boxes in place of the old 20 rounders. $11.39 per 25; Aguila Ammunition —P.B. 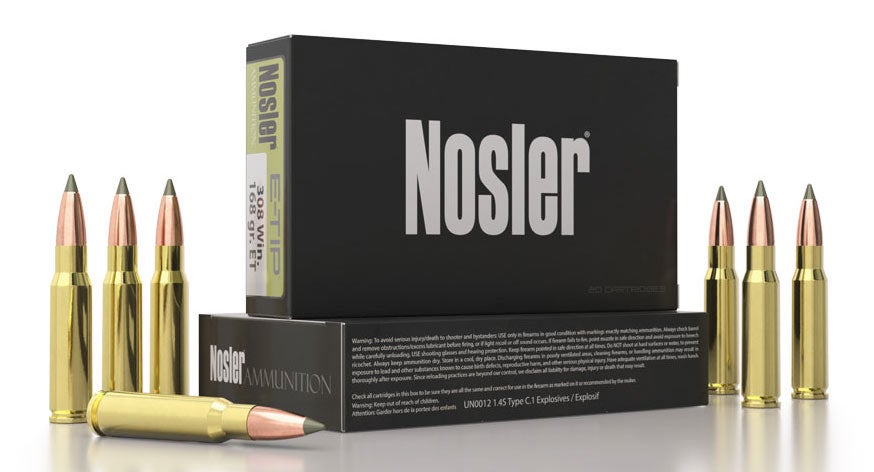 This is another dedicated AR round, but it goes in a different direction than the Valkyrie, and faster. The 22 Nosler is based on a considerably bigger case, with 20 percent more powder capacity and about 300 fps more velocity. It comes in four different loadings, from competition to varmints, and the conversion of a standard AR is easy: Get a 6.8 SPC magazine and a 22 Nosler barrel and you’re done. Nosler claims that, out to 1,300 yards, its new 22 will outrange both the Valkyrie and the standard .223. This works out to be correct, but bear in mind that the other two will be more pleasant to shoot and have longer barrel life. In any event, 1,300 yards is a long, long way. Amazing what those little bullets will do. Prices range widely depending on load, starting at around about $35 per 50; Nosler —D.E.P. 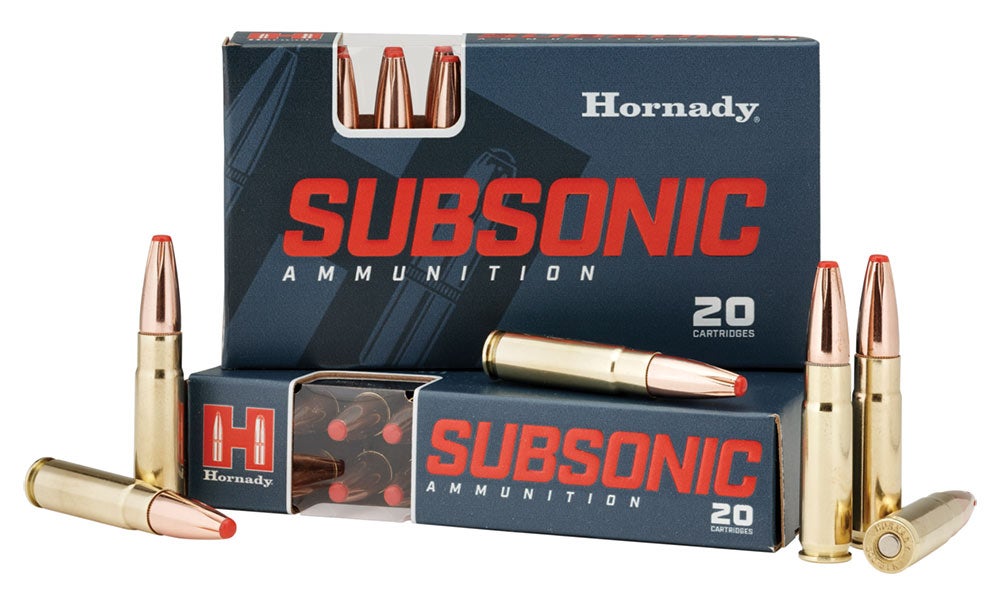 The same polymer-tipped Hornady FTX bullet that took lever action rifles to another ballistic dimension is now providing a new twist to one of the most popular MSR cartridges, the 300 Blackout. Hornady’s new Sub-X load launches a 190-grain FTX bullet at subsonic velocities, while providing optimum pressures for cycling semi-automatic rifles. Subsonic loads for the Blackout are nothing new, but one that will reliably expand and penetrate 16 to 18 inches, with up to 90 percent weight retention is. This load even meets the FBI’s terminal performance requirements. Starts around $22 per 20; Hornady —R.M. 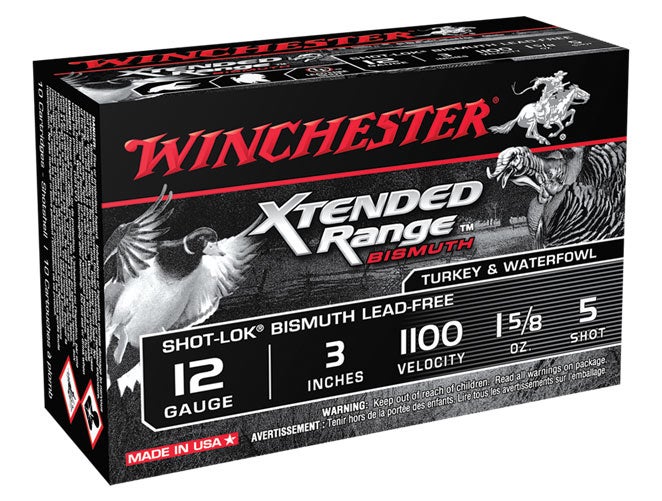 For 2018 Winchester is loading non-toxic bismuth shot with the Shot-Lokt technology that first debuted with the Long Beard turkey loads. This new offering starts with 1-5/8 ounces of bismuth 5 shot and encases it in an epoxy-like resin that shatters into a cushioning buffer as the shot travels down the barrel. The result is tight patterns in a shell suitable for old guns, that should—if the performance of Long Beard is any indication—do a number on ducks, turkeys, and late-season pheasants. Price not yet available; Winchester —P.B. 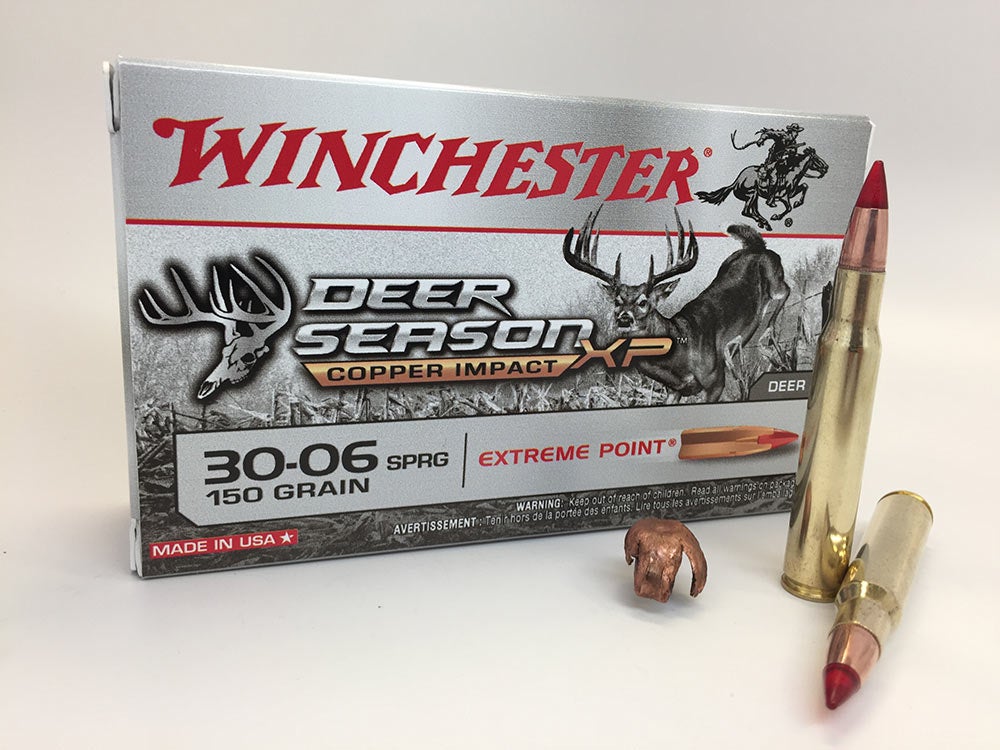 Deer Season XP has been on the market several seasons now, and its reputation on whitetails is a lethal one. Still, as deadly as it is, a deep-penetrating bullet it is not—nor is it designed to be. But if you’re someone who prefers more penetration in a deer bullet, Winchester now has the answer for you. The new Copper Impact version of Deer Season XP uses a similar, large-diameter polymer tip up front and hollow-point bullet design for the signature rapid expansion—but an all-copper construction provides better weight retention and penetration potential. Nothing wrong with that when you’re faced with a quartering shot on a stud of a Midwestern buck. The line will initially be offered in .243, .270, .30-06, .308, and .300 Win Mag. Price not yet available; Winchester —W.B.