Each January, the archery and bowhunting industry converges for the annual Archery Trade Association show. This is where most of the new products for the following season are debuted. The convention hall is surrounded by shooting lanes, giving us a chance to try all the year’s top new bows. Here’s a look at some of our brand-new favorites **(we’ll continue adding to the gallery as we cover more bows throughout the show). ** 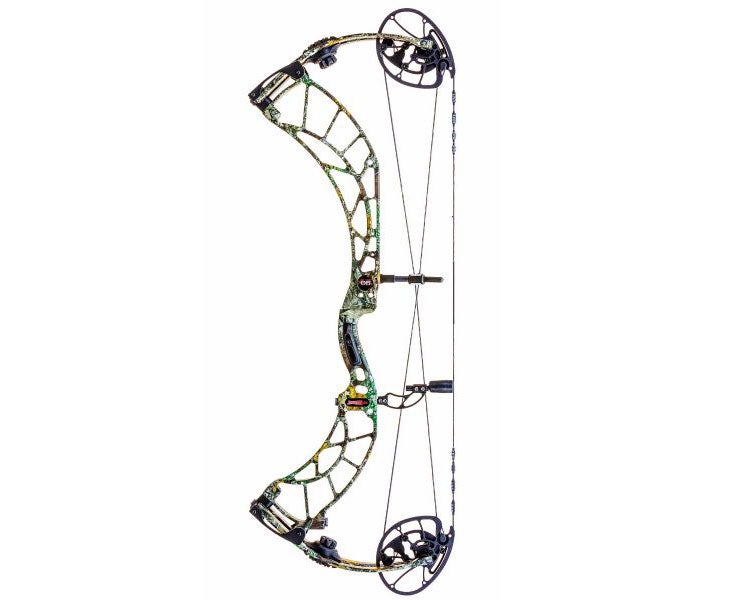 I’m always happy when I shoot a true speed bow that doesn’t make me feel like I’m steering a muscle car, and the Fixation impressed me a bunch. The new XP Cam™ has enough valley to make for a fairly pleasant draw cycle, while still delivering an extremely fast arrow. The Fixation’s redesigned riser features stronger limb pockets, a rear stabilizer mount, and a beefier profile that doesn’t look like it should balance as well as it does. While I’m no fashionista, lots of shooters want a cool-looking bow that reflects their personality; Obsession knows this and delivers with multiple camo patterns and string colors that allow shooters to get a bow that matches their individual tastes, and that’s pretty cool.($999, Obsession Bows) Specs: Axle-axle: 32.25″, Brace height: 6″, Weight: 4.5 lbs., IBO: 354 fps 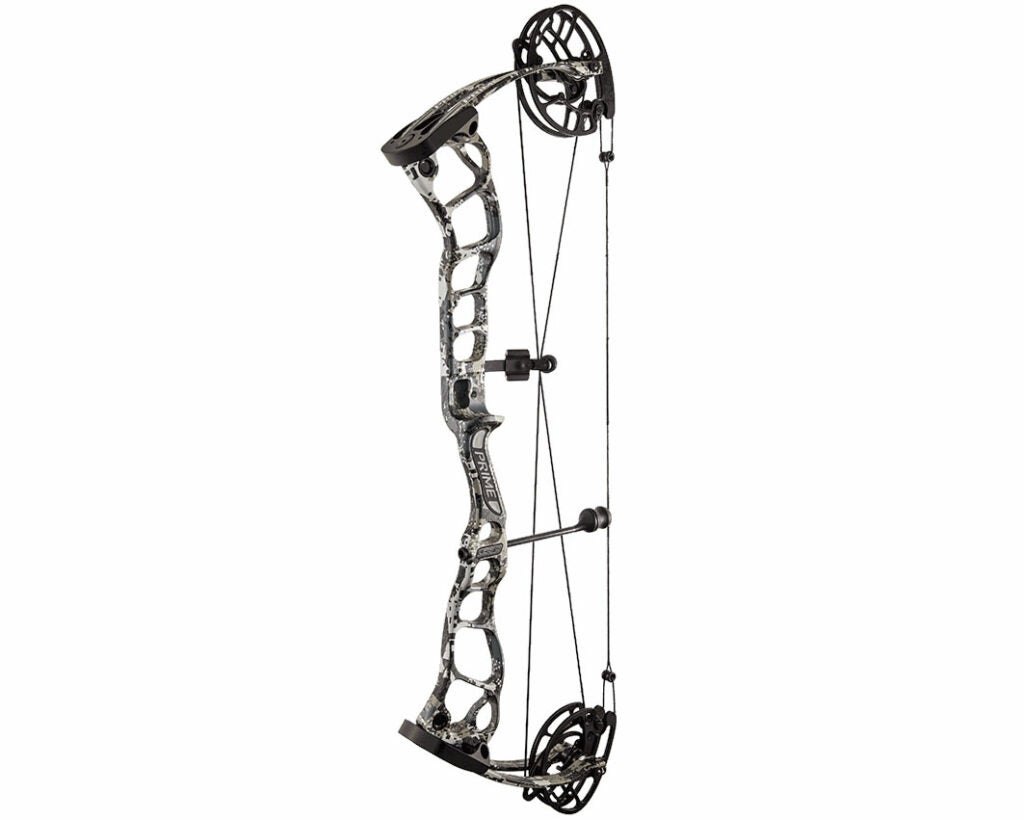 When Prime decided to build their shortest bow ever and still use Centergy™ technology—which achieves better bow balance by centering the bow’s grip—they had to do some major redesigns. The first and most notable is the Logic’s split limbs, a first for Prime. The second was the widest set of parallel cams the Michigan-based company has ever built (and that’s saying something). Finally, Prime designed a new platform for the whole setup; the new Swerve™ riser sports a unique curve that’s meant to keep the top and bottom parts of the riser working in unison. As a fairly short bow, it’s no surprise that the Logic stacks a bit more on the draw and rolls over a little harder than past Primes, but totally manageable, and all the other great shooting qualities you expect from this brand are there: good valley, solid wall, and dead in the hand. ($1,099, G5 Prime) Specs: Axle-axle: 31″, Brace height: 7″, Weight: 4.3 lbs., IBO: 330 fps. 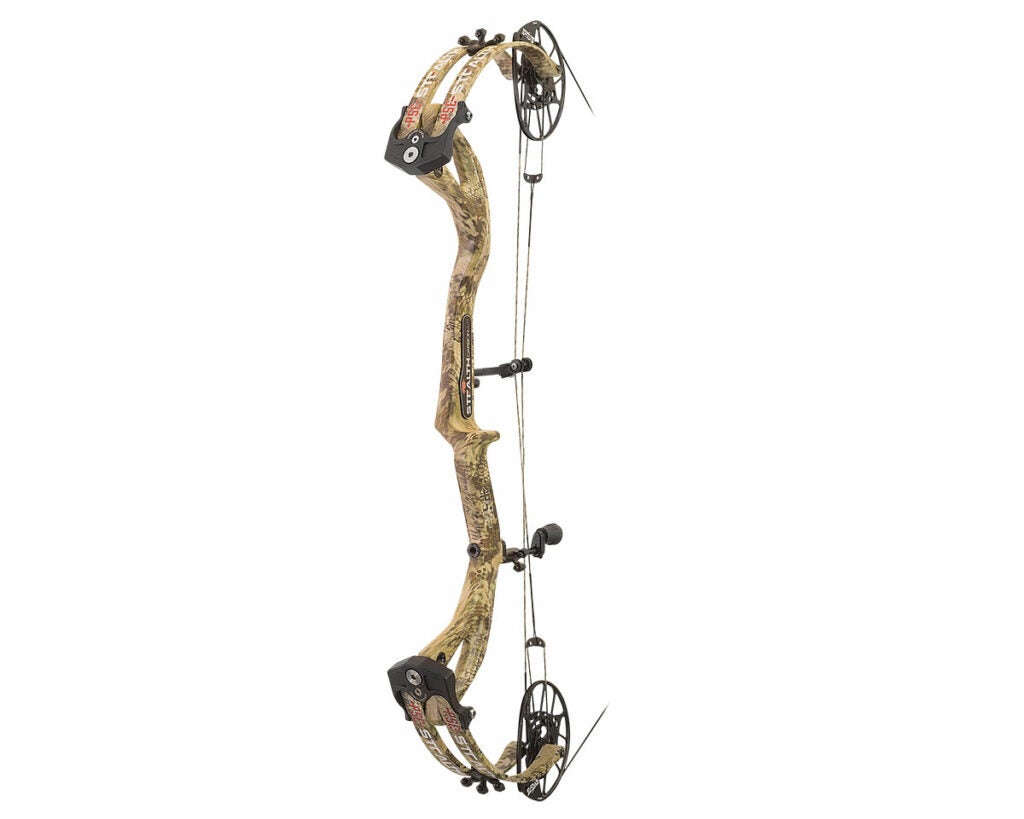 If anyone questioned whether PSE had the carbon riser nailed before, the Stealth should erase any doubt. At a featherweight 3.2 pounds, this bow is at least 25% lighter than anything else I shot at ATA—a real consideration for mountain hunters—and the fit and finish is as good as any PSE bow I’ve shot. While PSE has stuck with its successful Evolve™ cam on the Stealth, there are some new features: the Live Wire™ strings are tough and designed to prevent stretch and rotation, the Flex Rod ™ insures clean cable clearance, and all hardware is uber-tough titanium. I wasn’t surprised at a bit of hand shock from such a light bow, but it was pretty minor, especially for a bow this quick and pleasant to draw. ($1,499, PSE Archery) Specs: Axle-axle: 33″, Brace height: 6″, Weight: 3.2 lbs., IBO: 342 fps 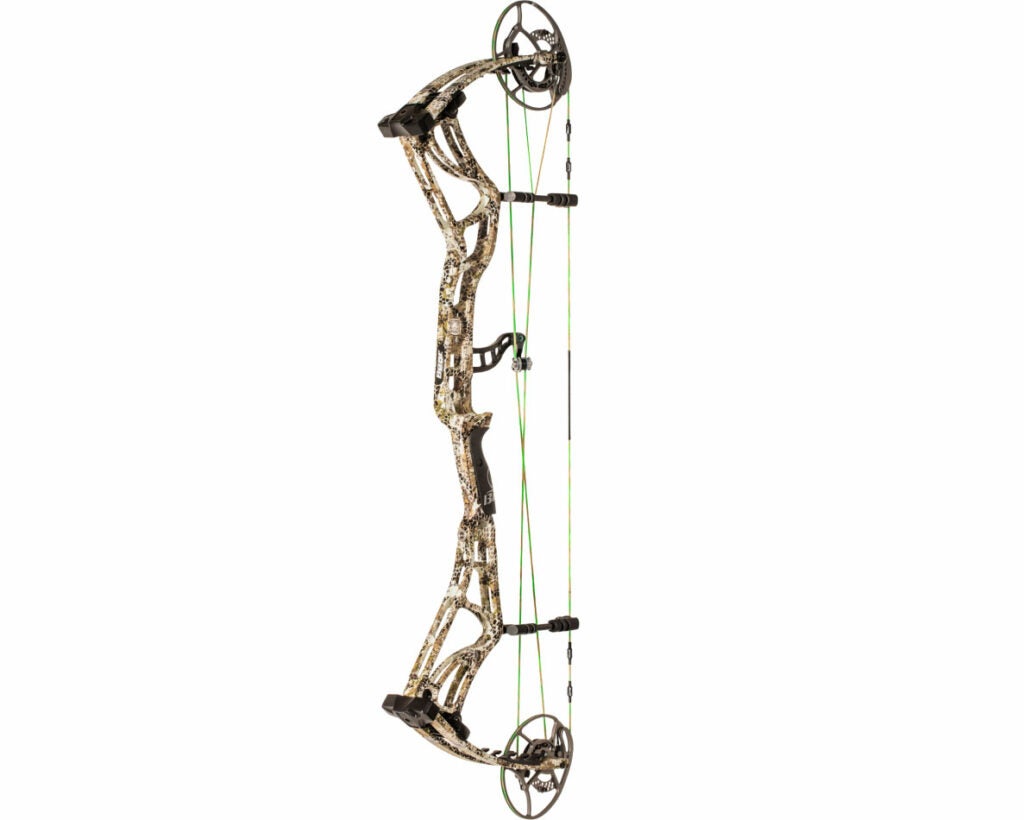 In addition to producing a solid new hunting bow, Bear did something extremely smart with the Kuma; they offered a flagship model that’s at least a C-note less expensive than the competition. But hunters with economy on the brain are getting a lot here. Bear’s new H18™ hybrid cam is plenty quick, and it rolls over nicely. The forged Bear Cage™ riser reduces weight while remaining tough. Also new are the Sonic Stops™ string suppressors, designed to reduce vibration and noise. It was fun shooting this bow, and my smile grew a lot wider when I learned hunters could save some money while still getting a legit flagship model from an legendary bow company. ($899, Bear Archery) Specs: Axle-axle: 33″, Brace height: 6″, Weight: 4.3 lbs., IBO: 345 fps. 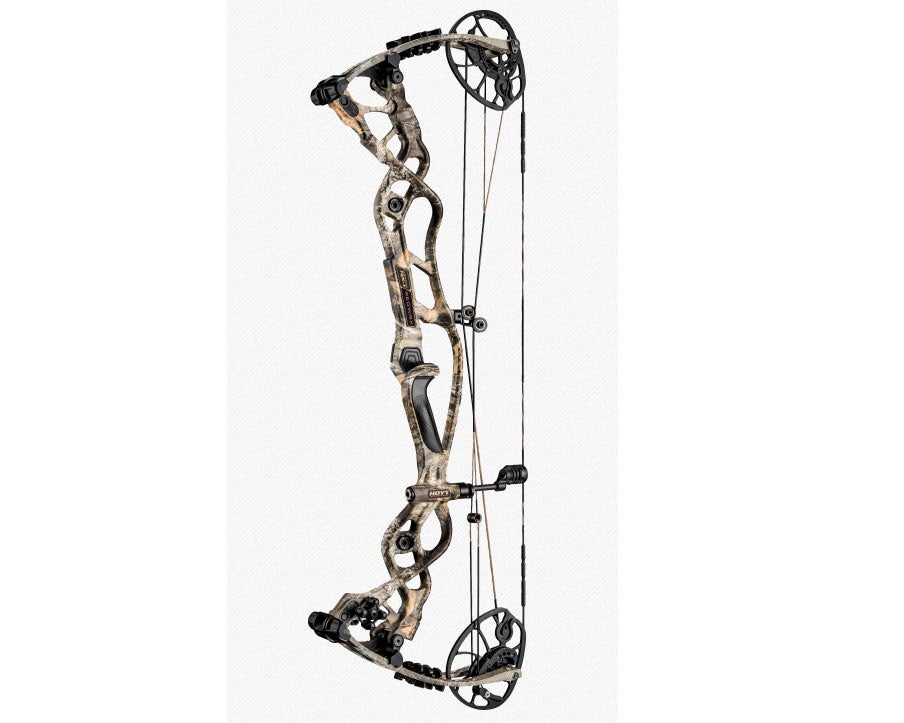 Hoyt has had the carbon speed bow thing nailed down for years. The Carbon RX-1 offers everything you’d expect, with a twist: it’s the most pleasant-shooting Hoyt bow I’ve ever shot. The new riser features a lowered grip and a redesigned lower limb pocket, which the engineers say results in better balance. All I know is the RX-1 just settles in at full draw, and the new X-Act grip helps because it’s slim and comfortable. Also new is the ZT Hyper Cam, which offers up the trademark Hoyt speed, but with a draw cycle smooth enough for old shoulders like mine, plus limb stops and 4 inches of draw-length adjustment. But my favorite feature is the new Shock Pod vibration damping system, which results in the quietest, most dead-in-the-hand Hoyt bow in years. 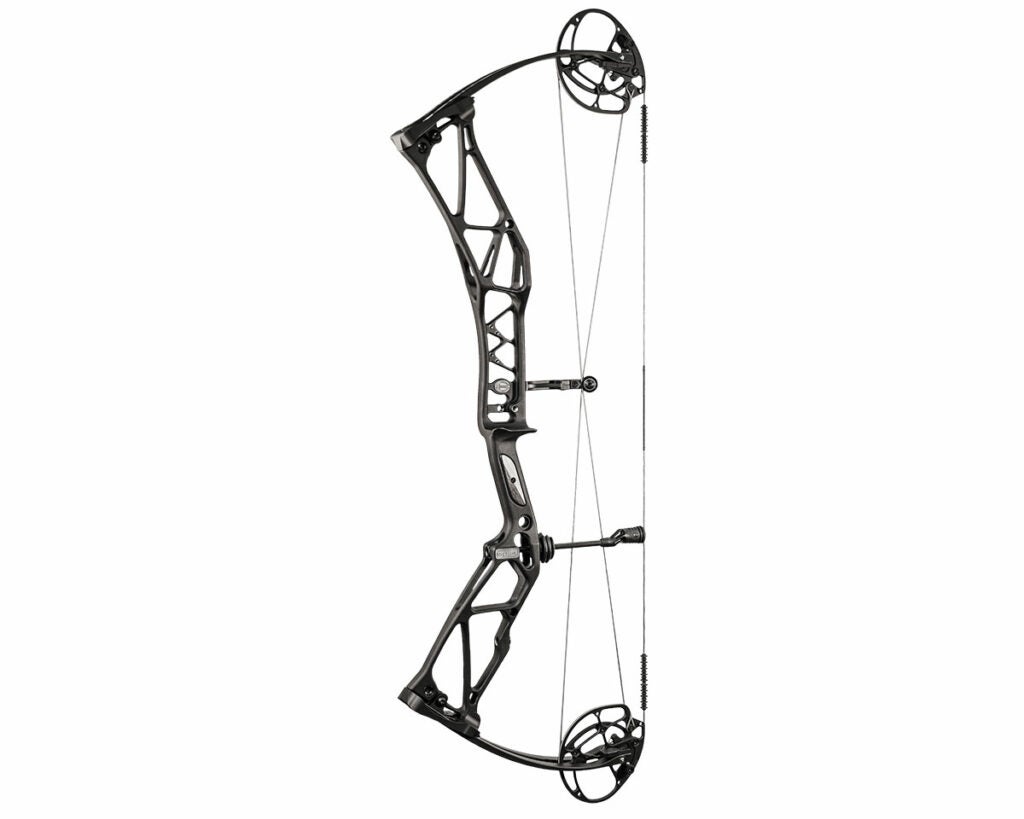 Last year Elite took a radical departure with their flagship bow, the Option, and to be honest I wasn’t crazy about it. But this year’s Ritual seems to put the “shootability” company right back on track. Thanks to a new cam system, the Ritual features the satin-smooth draw and solid back wall that Elite fans crave. Most notable on the Ritual is the quiet and vibration-free shot, which they somehow accomplish without rubber stuff all over the riser. I asked the guys at the shooting booth to explain this to me and they just shrugged; with the engineers out to lunch I had to guess. Must be alchemy? The Ritual also features a new riser design that sports the double cage of last year’s model, but with cutouts to improve balance, and a slimmer, more comfortable grip. 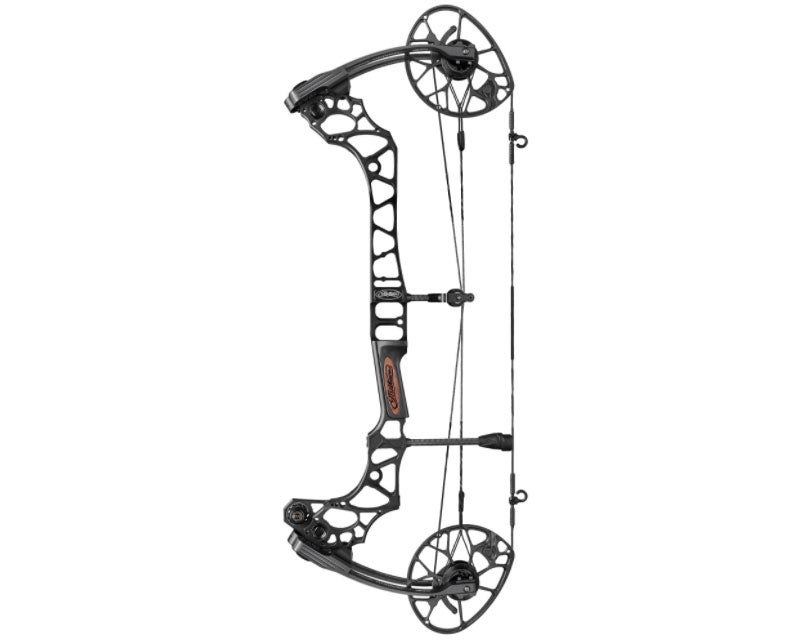 This is one short little sucker, and I came to the shooting booth a little leery of the Danny Devito of this year’s ATA. But, the Triax won me over pretty quickly. My beef with most of the short bows I’ve shot is that they’re spastic and hard to balance, but the Triax just settled in at full draw. Part of this is the bow’s physical weight; nearly 4-1/2 pounds can feel clunky on some bows, but it’s perfect on the Triax. Mathews has long been a leader in the quiet, vibration-free shot, but their new “EHS” (Enhanced Harmonic Stabilizer ) system—which places dampers at three unique places on the riser—made the Triax pleasant to shoot. In short, this is a quiet, plenty fast, smooth-drawing, vertically-challenged bow that should be really handy in the field. 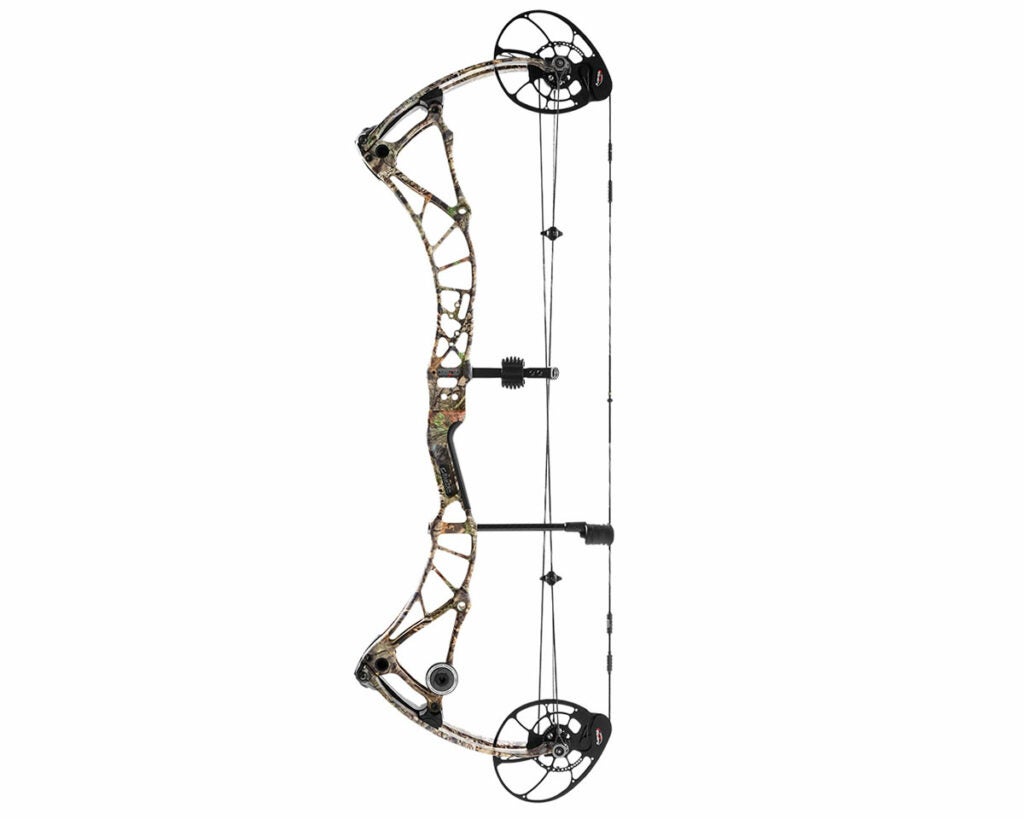 Shocker alert: Bowtech built another great bow this year! The Oregon-based company has been a Top-3 mainstay in our annual bow test, and this year’s Realm should be in another slug-out for the title. While Bowtech has stuck with the wildly successful OverDrive Binary cam system and Powershift technology featured in last year’s Reign, they’ve added some cool improvements. The most notable is a CP Dual Lock system that marries the limbs to the limb pocket, and the limb pocket to the riser; the result is a rugged, yet clean-looking system that appears bomb-proof. Also new is an Orbit Dampener that can be placed in different areas to offset accessory weight while reducing vibration. But my favorite new thing is the Clutch Performance grip, which is slim all around, but features a flat back that fit my hand like it grew there.