Only a few years ago, seeing the new crossbows was something of an afterthought compared to checking out the flagship vertical bows at the ATA Show. Not anymore. With crossbow sales—and hunting opportunities—ever on the rise, innovative x-bows certainly command as much attention at this show as any other category of gear. Here’s a look at some of the top new models we got to shoot. 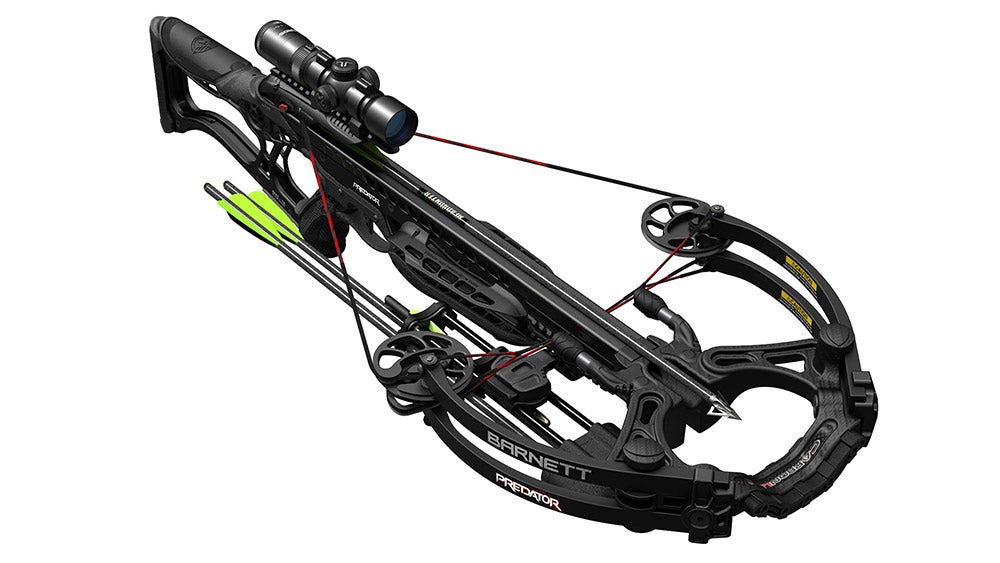 Never one to back down from a speed war, Barnett jumped in to this year’s fray with the Predator, their fastest crossbow to date. But just as impressive as the 430-fps. speed is the Predator’s handling; with a newly designed Carbonlite(TM) riser, this is bow lacks the front-heavy feel common to other speedsters. The Predator’s trigger breaks at 3-pounds, but a roller between the trigger and the sear makes the pull feel even lighter. The final feature that stood out for me is the pass-through forearm grip, which is comfortable and has a safety flange that won’t allow a shooter’s fingers to creep up on the rail. My dad clipped the top of his thumb a couple year’s back, so safe fingers is something I appreciate. ($1,399, Barnett Crossbows) 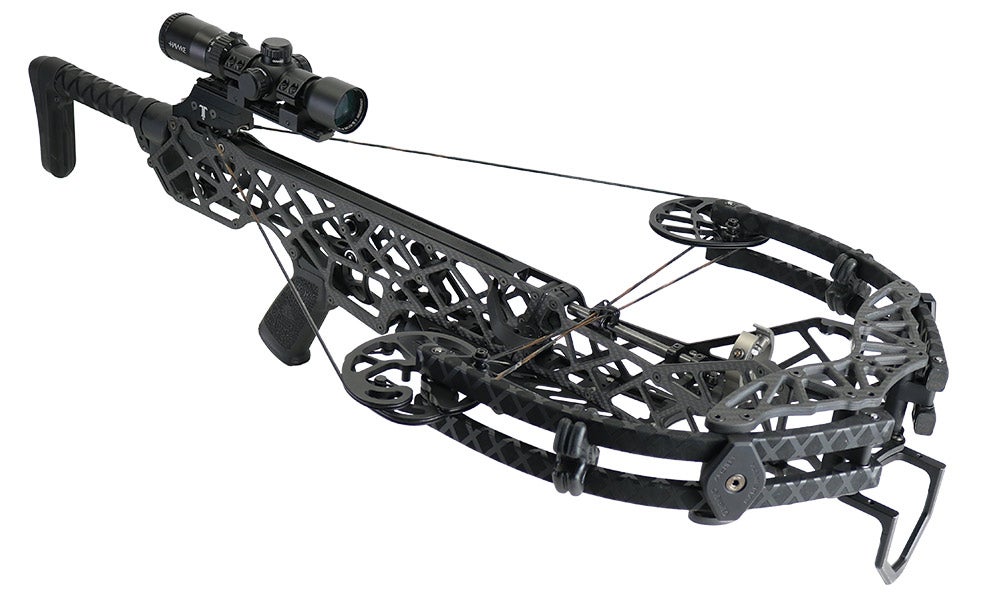 Gearhead made a pretty big splash at the 2017 ATA show, introducing bows and a crossbow that all looked like props from a Terminator movie. The company didn’t take its foot off the gas this year, with a pair of new crossbows that maintain the same skeletal appearance while delivering impressive innovation. I shot the X16 Tactical, which is the first take-down crossbow that I’m aware of. (There is also a Target version.) Thanks to a dovetail joint-and-clamp system at about mid-bow, shooters can break the bow in half and slide it into a slick field pack for easy transport or storage. The X16’s frame is full of cut-outs that result in an uber-light bow that’s surprisingly quiet, and the trigger breaks wonderfully at a touch over 2 pounds. If you’re into the futuristic aesthetics and can get past the hefty price tag, this is a crossbow well worth considering. ($2,299, Gear Head Archery) 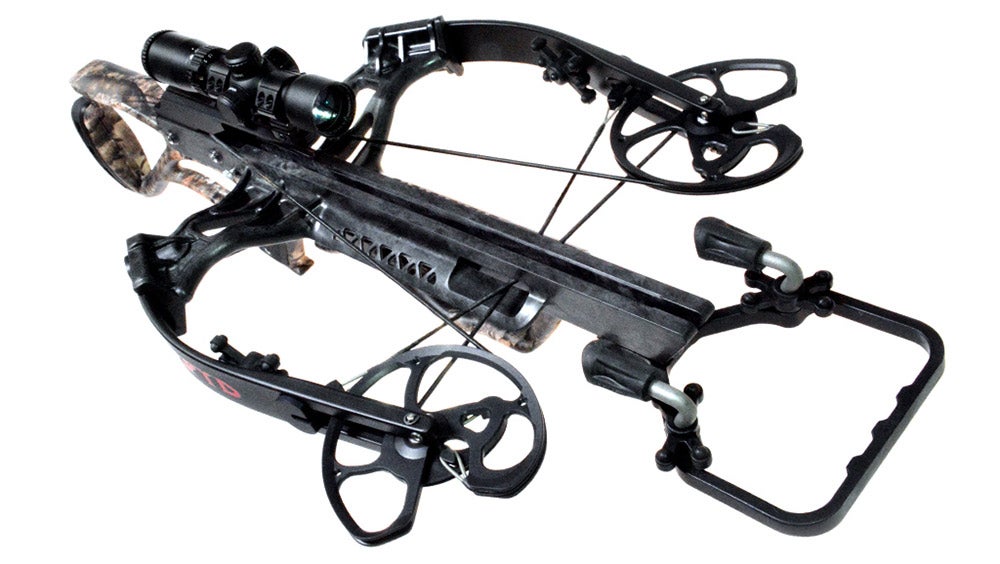 The company that brought reverse-draw to the crossbow world has put some unique features into their latest creation, the Deathstalker. While the ATA is a poor place to test for noise, the first thing I noticed was how quiet this model was when I shot it. The tech-guy explained that the barrel, finger guard, riser, and limb pockets are all a single component, which eliminates the need for several fasteners and vibration points. Like all Scorpyds, this one has a wonderful trigger that trips at a mere 1.5 pounds. The balance is pretty good on the Deathstalker, despite its fairly large size, and the Houge 1911 grip feels good in the hand. This isn’t the fastest bow Scorpyd has developed, but it’s plenty quick for anything walking this continent, and the price falls in the not-bad range. ($999, Scorpyd)

Excalibur has been making utterly reliable and virtually indestructible recurve bows for years, but the Assassin is their most exciting offering to date. I’ve tested several Excalibur bows, and cocking them has been—to put it kindly—a chore. The new Charger Cranking System eliminates that complaint; an ambidextrous handle (with a wrist strap that makes it nearly impossible for the crank to slip from your hand) detaches from the stock and cocks—and de-cocks—the bow in complete silence. The new Tru-Fit stock allows adjustment in both length and comb for a perfect fit, and the two-stage Pro-Shot trigger broke very nicely. Sure the technologic jumps made by the wheel-bow companies are impressive, but in terms of no-nonsense improvements on a great hunting bow, the Assassin was probably my favorite at ATA. ($1,699, Excalibur Crossbows) 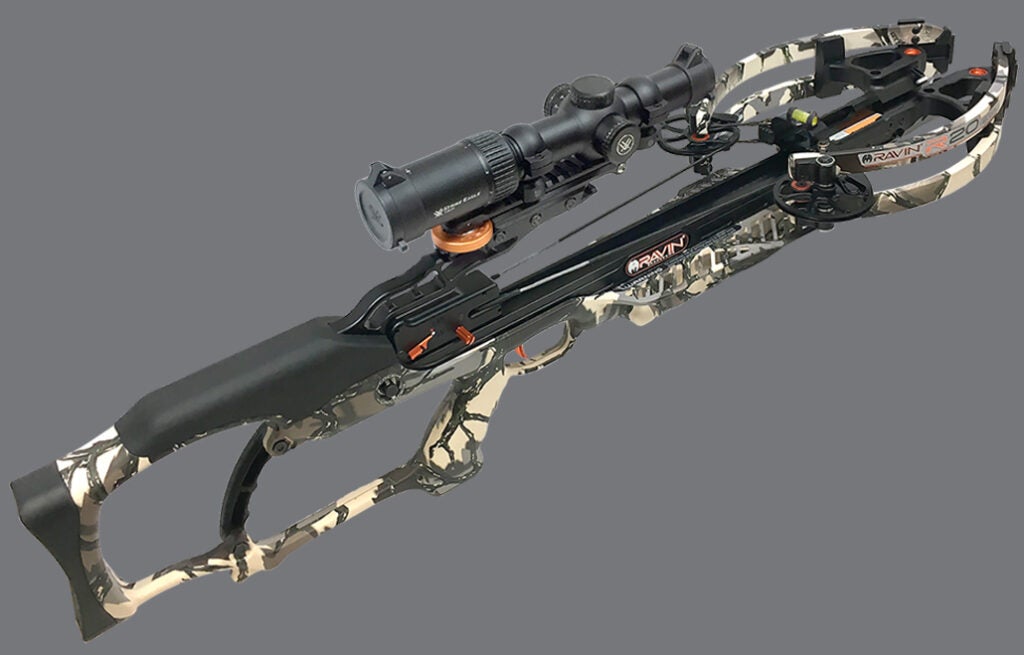 Ravin set the ATA afire in their show debut last year (and won our annual crossbow test going away), and the new R20 offers improvements on that original model. The redesigned stock sports a more comfortable grip and cheek piece. The safety, which was a push-in button last year, is now a crisper, more intuitive toggle on the side of the receiver. Those are fairly minor tweaks on an already awesome bow, so if you need some real gew-gaws, upgrade your R20 to the Sniper version, which features a “Jack Plate” adjustable elevation scope mount that allows MOA angle adjustments that theoretically lets you shoot a bolt accurately out to 200 yards. The Sniper Package also includes a Vortex Strike Eagle 1-8X24 scope that’s really sharp and offers 11 illumination levels. Sure it ain’t cheap, but it’s undeniably cool. ( $2,549, Ravin Crossbows)

The Sub-1 was among the new crossbows generating a lot of buzz this year, and the excitement was justified. There’s much to love in this model and a lot of it starts on the lightweight aluminum frame, which features an overmolded foregrip that’s really comfortable, an AR-style pistol grip (that can be interchanged with aftermarket grips) and a stock that’s adjustable in both length and comb. Also impressive was a two-stage trigger that broke nicely at 3.4 pounds, and a de-cocking button that allows shooters to disarm their bow quietly and easily. Finally, the Sync X Cams are, as the name implies, perfectly synced for enhanced accuracy and easier cocking.  Mission has been in the crossbow game for a few years, and the Sub-1 is by far their best effort. ($1,499; Mission Crossbows) 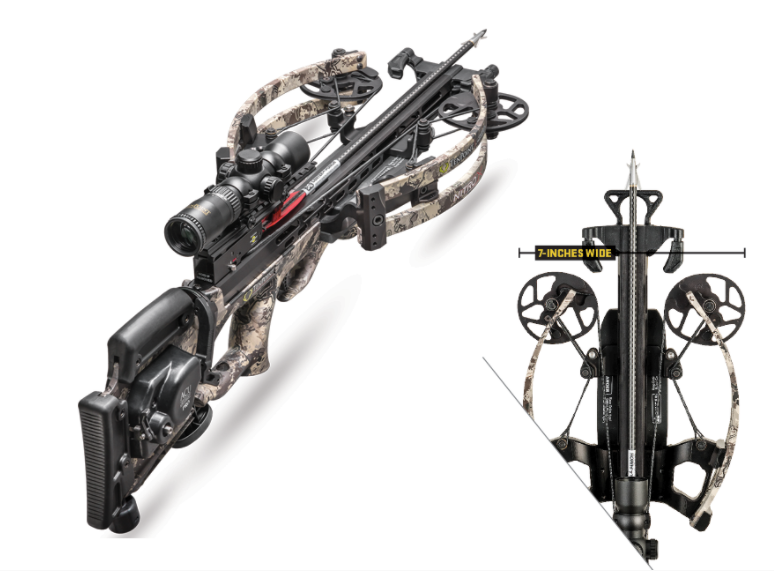 Never a company to back down from a challenge, TenPoint took a look at last year’s ultra-narrow Ravin and said “we can do that.” The result is the NitroX, a reverse-draw bow that measures only 7″ at full draw. But of course this is more than just a skinny bow; the NitroX’s Slingshot Technology  launches bolts at a rocket-quick 440 fps, and Vector Quad™ technology powers the limbs without a cable crossing the rail. I liked the adjustability of the stock (both length and comb) and at 3.5 lbs. the trigger is plenty light. At close to 8 pounds the NitroX is no featherweight, but the bow is so nicely balanced I didn’t notice the heft; like most of the TenPoint bows I’ve shot, the NitroX feels like a killer. ($1,999, Ten Point Crossbows)

Another crossbow pushing the envelope on speed, the Ripper 415 differs dramatically from the other racehorses in the 2018 lineup; its $379 price tag is nearly two grand (as in thousand) cheaper than its competitors. The aluminum shooting rail and composite stock combine to reduce weight, yet I found the Ripper easy to hold on target. Also notable was an adjustable stock and forearm grip, and the KillerTech trigger, advertised at 3.5 lbs., was nice and crisp. I’m struggling to find something wrong which a lightning-quick bow for under $400, but I can’t think of a thing right now. ($379,  Killer Crossbows)