The Best New Knives of the 2019 SHOT Show

From hunting knives to multitools to an out-of-this-world machete, these are coolest new blades of the year 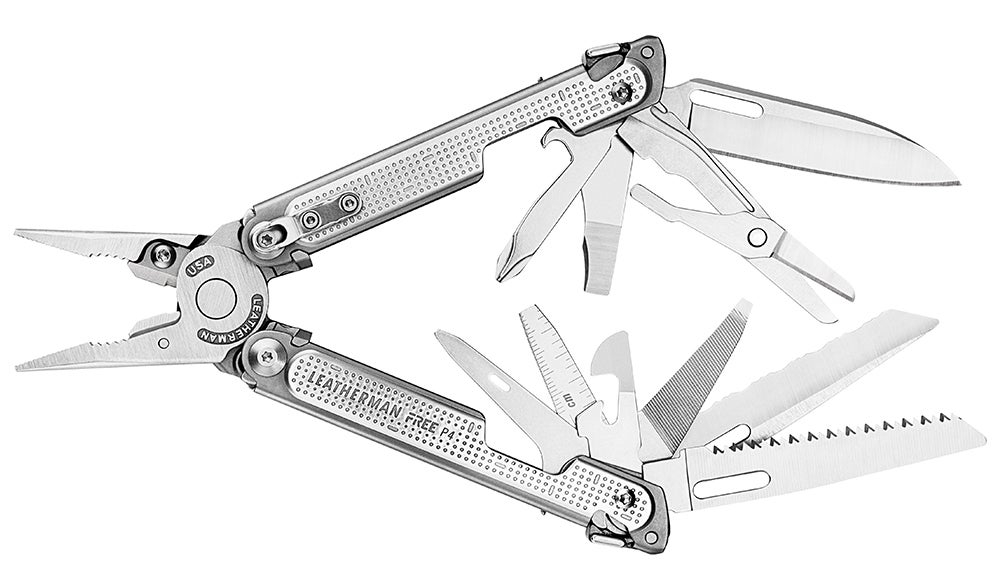 The Free P-4 multitool will retail for $140. Leatherman
SHARE

If sharing is caring, there was a lot of love in the cutlery world at 2019 SHOT Show. One trend I noticed was a tendency to build knives that borrowed across blade categories. There were tactical knives you wouldn’t hesitate to take on a hunting trip. There were beefy EDC knives small enough to dangle from a fly-vest zinger. There was even one large jungle chopper that was designed for outer space. Not that purpose-driven design wasn’t apparent, but knife designers seem to have stepped away a bit from pushing the boundaries of category-specific blades and crafted tools that rely more on function than brash form. Here are 11 of the best new knives of the SHOT show.

If I wanted to carry a folding tactical knife into a big game camp or on a week-long wilderness trip, this would be the one. The Seal XR is a bit like a folding version of SOG’s flagship Seal Pup, with a beefy XR sliding-bar lock mated to a very smooth ball-bearing pivot. A 3.9-inch clip-point blade ground from stout stock has a fearsome point but still enough belly for use as a field dresser, and the refined grains of the powdered S35VN steel lend toughness to a sharp, hard-use knife. The glass-reinforced nylon scales are heavily textured, but without ridges or corners that would lend to hand fatigue. And the heavily jimped flipper opens this beast of a knife effortlessly.

The Astronaut M-1 Machete will retail for $234.

A re-creation of the original survival machete requested by NASA, this design has been into space nine times, tucked away inside every Apollo and Gemini mission spacecraft. With an overall 17-inch length, it sports an 11.75-inch stainless steel machete blade armored with a double row of sharpened spine teeth, a synthetic handle mated to the tang with oversized brass pins, and a tang stamp to commemorate its history. If it was good enough for marauding space aliens, it should make quick work of kudzu, greenbrier, and turkey oak.

With the Free line of multitools, Leatherman set out to re-invent the category it practically invented. Thankfully, the company went about the task not by stuffing an existing architecture with tons of snazzy new tools, but by making what has always worked work remarkably better. Gone are the nail nicks to open each tool. Blades, drivers, saws, and more are opened by a sort of flipper mechanism, with a smoothness that comes from the use of imbedded magnets to provide opening and closing mechanics. All tools are accessible with one hand, without opening the multitool. And in the parlance of Leatherman engineers, the tools rely on “epic haptics,” a sort of mechanical non-verbal communication, of clicks and indents to relate when the tools are fully open or closed. The P-4 is the bells-and-whistles flagship, with robust pliers and 21 tools.

The Pilar will retail for $70.

The sleek, minimalist lines of the Pilar are a nod to its Danish designer, Jesper Voxnaes, who named the knife after Ernest Hemingway’s 38-foot recon ship that patrolled Caribbean waters for German U-boats. But there’s more to the knife than backstory. The blade on this version of the Pilar is D2 steel with a black oxide finish, with a front scale of G10. Each is indicative of CRKT’s commitment to move toward more premium materials. Wharncliffe blades were everywhere on the SHOT show floor this year, and the Pilar’s modified Wharncliffe carries a bit of functional belly that sets it apart. A deep finger choil on the base of the blade allows you to get your entire hand around the bead-blasted aluminum handle. It’s a sweet choice for camp chores that involve slicing and light chopping.

The Spyderco Water Way will retail for $200.

Designed by Lance Clinton, a professional kayak angler based in Costa Rica, Spyderco’s newest entry into its rustproof Salt Series is a full-tang fixed-blade knife forged of rustproof LC200N steel. The idea was straightforward: Craft a hard-use knife that could get knocked around in the bottom of a saltwater-rinsed and fish-slimed kayak for weeks and ignored until needed to slice through braid or dispatch an unruly mackerel. Built on a distal taper for balance, with a 4.4-inch blade, the Water Way boasts tang scales of textured G10 and rides in a warp-resistant Bolatron sheath.

The Ice Crystal Damascus will retail for $289.

Founded in 1928, the Finnish cutler Marttiini has long created stylish puukko knives. The new Ice Crystal Damascus sports a hand-filling curly birch blade with the distinctive pommel grip of Far North knives, and a 2.5-inch Damascus steel blade crafted of 120 layers of stainless steel. The handle is nearly twice the length of the blade, for ease of gripping with gloved or cold hands, and there’s plenty of belly for skinning game. Riding in a white leather sheath, this is quite possibly the fanciest squirrel knife ever made.

Katz Knives refines its hatchet and axe offerings with 19 models in the new Axe King series, all with heads based on a traditional Hudson Bay design. The 19-inch model is perfect for general camping and hunting use. The 5160 spring steel is sheathed in a satin finish, with a 5/8-inch straight grind on the edge to reduce friction on the axe’s initial bite and a poll scored in a tight checkerboard pattern for increased purchase when pounding tent stakes into hard ground. The handle is oil-finished hickory, and the axe comes with a hand-sewn saddle leather “swing sheath” that pivots when carried on a belt for ease of walking. 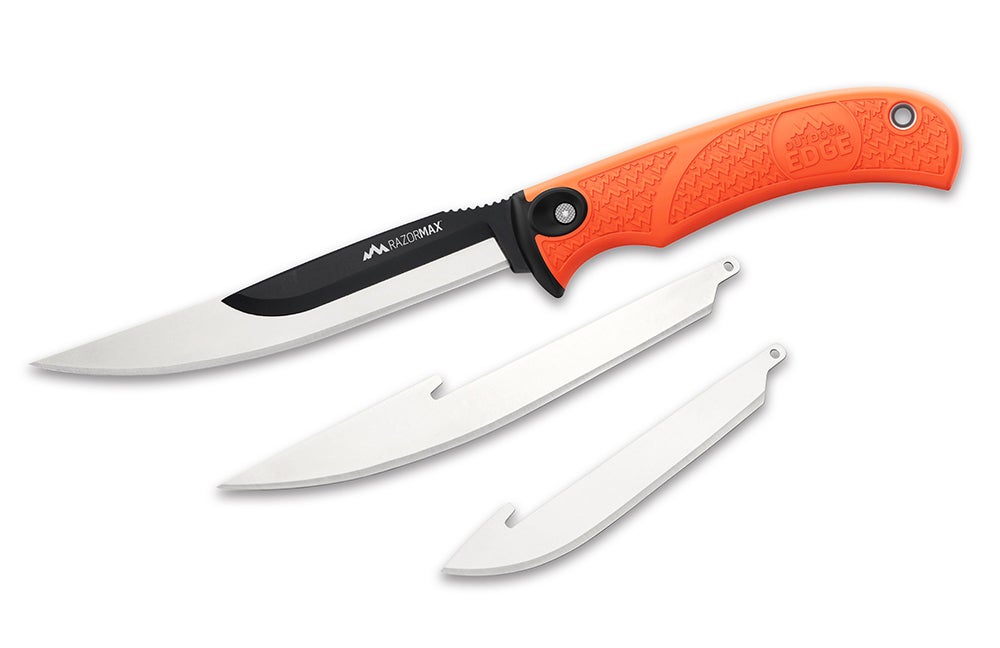 The Razor Max will retail for $80.

The ergonomically shaped handle on the beefy new interchangeable blade knife from Outdoor Edge is clad in a rubberized polymer that is as grippy as used chewing gum—exactly what you need when you’re playing surgeon on a big buck’s windpipe. The fixed-blade knife comes with 3 sets of two different blade designs: a 3.5-inch drop point and a 5-inch boning/fillet knife with just enough flex for serious fish work. Each blade slides into a lengthy steel slot holder for enough rigidity for tough, two-handed rib-splitting cuts. Audible clicks let you know the blades are seated correctly. It’s one solid knife.

This bantamweight blade is cute like a mongoose is cute—small, compact, svelte, and deadly. A 1.8-inch blade of CPM 20CV powdered steel has a clip point and a touch of sweeping belly that would wreak havoc on FedEx boxes and rabbit feet with equal ease. Clad in a carbon fiber front scale, with a titanium back scale that serves as a framelock, the 0022 seems to carry as much technology in a tiny package as a microchip. But you can still grip it tightly in a fist, thanks to deep finger choils and a jimped flipper tab that gives added purchase. It will disappear like a couple of quarters in your pocket or ride easily in a bird or flyfishing vest. Or just clip the wispy 1.7-ounce tool to your shirt. It’s a new breed of pocket protector.

You could be waist deep in an elk’s innards and still have full control of this blade. The liner lock knife is built with a deep finger choil and flipper tab that give an intuitive feel to how the knife is oriented in hand, and the accentuated thump ramp with deep jimping lend a very firm grip. G10 scales are rounded for less hand fatigue for long cutting sessions. The knife sports a 3.4-inch blade so it’s not small, and its tactical DNA shows in the stout 4mm blade. But a high flat grind makes it a good slicer and eases the pain of sharpening. There are innumerable folders on the market, but this one felt right the instant I picked it up. It comes in both satin and black stonewashed blades.