Best New ARs and Tactical Guns from the 2019 SHOT Show

If you have any doubt about the ascendency of all things tactical in the shooting world, you only need to attend the SHOT Show, where classic hunting rifles are now hard to find and the tactical guns and gadgets would cover a football field 3 feet deep. Sometimes separating the tactical from the practical can be difficult—and, to be clear, you can hunt with a lot of this stuff. That said, the guns I’ve chosen below are undeniably tactical, and some of the hottest firearms at the SHOT Show this year.

Ashbury Precision Ordnance is expanding its line of Saber M700 Sport Utility Rifles with the new Saber M700 Tactical Rifle, chambered for the .308 Winchester and 6.5 Creedmoor. These rifles are manufactured using hand-select Remington Model 700 barreled actions, mated with specially configured variants of the patented Saber modular rifle chassis. They also use a Rifle Basix trigger and Ashbury’s rugged Saber MRCS-AR MOD-1 modular rifle chassis. The high-tech features are numerous and custom options are available. This is the right rig for crossing _T_s and dotting _I_s at distance. $2,750; saber-m700.com

Though this gun’s tactical applications are limited, its tactical looks are not. Remington’s new 700 CP (chassis pistol) is built on a Model 700 action, and is mated with an aluminum chassis stock. It is available in .223 Remington (10.5-inch barrel), .308 Winchester (12.5-inch barrel), and .300 Blackout (10.5-inch barrel), with a full Picatinny rail, threaded muzzle, and an M-Lok adaptable free-floating tube/barrel shroud. This bolt-action pistol feeds from a detachable magazine and comes out of the box with a Picatinny optics rail. It’s essentially a sniper rifle/pistol that’ll fit in a briefcase. $1,020; remington.com

The Shockwave 590 Laser Saddle will retail for just under $600.

Short-barreled pistol-grip shotguns have become the rage. However, as tactic-cool as these compact scatterguns are, they all share the common problem of being difficult to shoot with any precision from the hip—which is the best and most comfortable way to fire them. Mossberg partnered with Crimson Trace and sorted this all out. Their new Shockwave 590 Laser Saddle incorporates a grip-activated green laser that saddles the action. This effectively turns this powerhouse into a fast handling and true point-and-shoot firearm. $595; mossberg.com

Remington’s new V3 Tac 13 holds one in the chamber and five in the mag.

Another abbreviated shotgun that’s new is the Remington V3 Tac 13. It has a synthetic Shockwave Raptor pistol grip and a forend with a retention strap. The cylinder-bore barrel is 13-inches long, and it has an extended magazine capacity of 5+1. It will reliably cycle 1-ounce target and reduced-recoil loads. This 12-gauge is a non-NFA firearm and is capable of dumping a dangerous amount of destruction on target in a short amount of time—if you can hang on. $915; remington.com

The MCX Rattler Canebrake comes ready for a suppressor.

The Sig Sauer MCX Rattler Canebrake comes as a suppressor-ready platform with an SD handguard and an inert trainer that mimics the size and weight of the SIG SRD762 suppressor. This makes the Rattler Canebrake easily convertible to be run suppressed. Other features include a two-stage, flat-blade, match trigger; Cerakote E190 finished upper and lower receivers; and a folding coyote-tan PCB Brace. The Rattler Canebrake comes with one 30-round .300 Blackout magazine. We’re betting you’ll see one in the next Die Hard or Taken movie. If not, shame on the director! $2,897; sigsauer.com

If you thought two new shortened shotguns were all you’d see for 2019, well, you’re wrong. Though not as popular as the 6.5 Creedmoor, these bird’s-head-gripped, short-barreled scatterguns are a selling sensation, and both Remington and Mossberg are offering a variety of translations on the concept. One that cannot go unmentioned is the 590 Shock ‘n’ Saw. It has a unique removable top grip that gives it that chainsaw-like appearance, and it has a bottom-railed forend with M-LOK compatible accessory mounting holes. I can see the movie poster now: The Return of Leatherface: Texas Shock & Saw 2020! $560; mossberg.com

The M400 Tread from Sig Sauer is a premium entry-level rifle accompanied by a full-line of accessories. This is an optics-ready rifle with and aluminum frame that features a 16-inch stainless-steel barrel with a free-floating M-LOK handguard, single-stage polished/hard-coat trigger, ambidextrous controls, a Magpul SL-K six-position telescoping stock, mid-length gas system, and it’s available in 5.56 NATO. Tread branded accessories—just to name a few—include a three-chamber compensator, ambidextrous charging handle, a ROMEO5 optic, and flip-up front and rear sights. $951; sigsauer.com

Remington has mated the Model 700 action with a Magpul tactical stock.

Though branded as a “hunting” stock, Magpul’s aftermarket drop-in stock for the Remington 700 has become a very popular tactical accessory. The stock was introduced last year by Remington as an option on their Model 700 rifle, and this year Remington is offering an enhanced flat dark-earth version. It is available in 6mm Creedmoor with a 20-inch barrel, and in .300 Winchester Magnum with a 24-inch barrel. The rifle comes with a bipod, 20 MOA optics rail, and a threaded and capped muzzle. There’s a lot of tactical goodness here for the money. $1,175; remington.com

The new Taranis X may be the lightest mass-produced AR-10-style rifle made.

Though the new Taranis X from MG Arms might be able to fit into the hunting or sport-shooting categories, this 6-pound AR chambered for the 6.5 Creedmoor, .308 Winchester, or .338 Federal, has to be considered a tactical sensation. Everything on this rifle—except the barrel—has been skeletonized. It comes standard with a 3-pound match grade trigger, Picatinny top rail, carbon-fiber handguard, and a Cerakote finish. It just might be the lightest mass-produced AR-10-style rifle on the planet. If you want to carry around all this weightless awesomeness, however, you’re going to have to pay. An AR-10 this light does not come cheap. $2,995; mgarmsinc.com 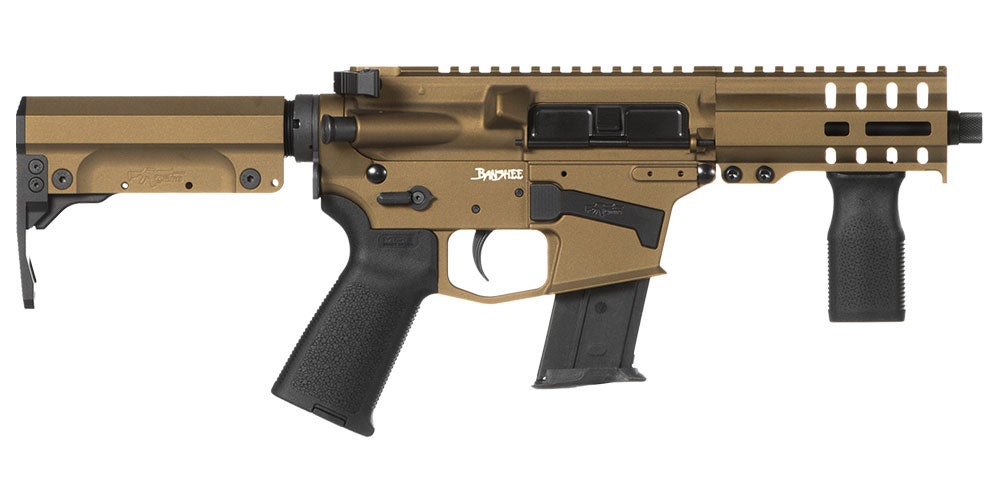 The Bashnee is the most badass model in CMMG’s new line of powerful AR pistols and short-barreled rifles.

CMMG has a new line of AR pistols and short-barreled rifles (SBRs) chambered for the FN 5.7x28mm. The new Mk57 line is fed from FN 5.7 pistol magazines and uses CMMG’s patent-pending Radial Delayed Blowback operating system. The Banshee in 5.7×28 has a 5-inch barrel and comes as either an SBR or an AR pistol. Other distinguishing features include CMMG’s new ambidextrous charging handle and an RML4 M-LOK hand guard. Used internationally for tactical applications, the 5.7x28mm cartridge will push a 31-grain bullet to 2,350 fps. It offers a level of firepower not found in other handguns, and recoil is negligible. $1,550 and up; cmmginc.com