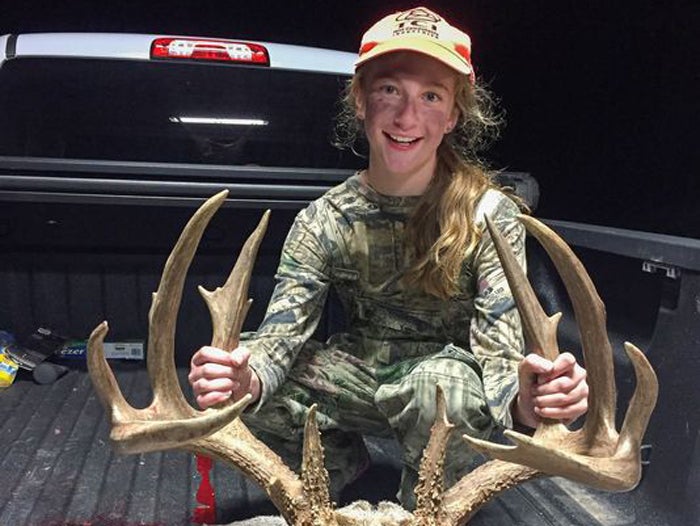 An 11-year-old’s first hunt may be one for the record books. Jenna Perryman of Springfield, Mo, shot a 200-pound, 15-point typical whitetail that green scored 178 inches. After a mandatory 60-day drying period, it will, in all likelihood, clear the 160-inch minimum score to be eligible for the Boone & Crockett Club record books.

Jenna shot the deer while afield with her father, David, during Missouri’s youth opening weekend, which ran from Oct. 29 to Oct. 30. Jenna and her dad had hunted most of the day, and as the sun began to set, he spotted a doe about 50 yards away. As Jenna prepared to shoot, David noticed a buck behind the doe and stopped her. “It didn’t look as big when it was that far away,” Jenna told the Springfield News-Leader, “but then when I saw it, I was like, ‘Whoa! Did I do that?'”

According to Justin Spring, Boone & Crockett Club big-game records director, a mere 474 of the millions of Missouri deer that have been tagged over the years have made the club’s record book. “Even if hers doesn’t make it in, that’s still a buck of a lifetime for anyone, let alone an 11-year-old,” he told the paper.

Jenna says she is having the rack mounted and the meat turned into summer sausage and jerky.