A RIVER RICH IN CATFISH

If there’s one thing that makes this trip worthwhile, it’s the way following the river has taken us off the... 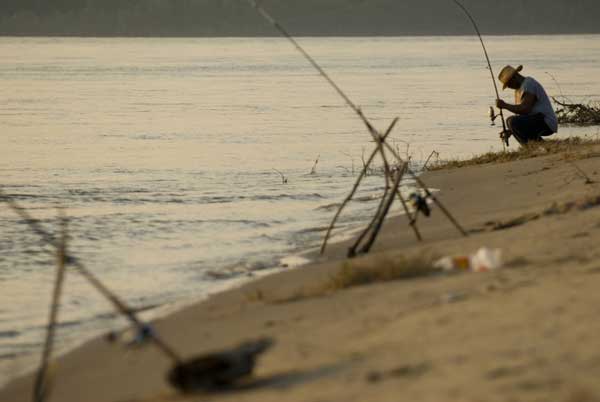 If there’s one thing that makes this trip worthwhile, it’s the way following the river has taken us off the beaten path. Sometimes way off. Which leads me to Glimp, Tennessee.

I don’t think many people visit Glimp. It’s on a road that leads to nowhere — except through a prison farm — and dead-ends on an empty bend in the Mississippi with nothing to recommend it, unless you’ve got an interest in cottonmouths. There’s only one establishment in town, a half-tackle shop, half-burger joint called the Gro and Bait that keeps food in the kitchen and live crickets behind the counter.

We stopped at the Gro and Bait because we were looking for directions to an oxbow lake we read about in the back of a West Tennessee fishing guide. For those who’ve never heard of one, an oxbow lake is a body of water formed when two bends in a river touch. When this happens the river cuts a shorter path to the sea, leaving its old channel behind. The bends left over are called oxbows, and on the Mississippi they’re supposed to be great places to fish.

At least, they are when the river isn’t feet above normal for this time of the year. As things turned out, the oxbow we were looking for was too full of floodwater for good fishing. Instead, the bait shop’s proprietor pointed us toward a sand bar on the river’s main channel that he said was a local catfishing hotspot during high water. This sounded good to us, so we bought a box of nightcrawlers and headed out to take his advice.

To get to his spot we drove down a long gravel road until we hit a turnaround surrounded by gum trees, then took a path through some tall grass and a few poison ivy thickets until we reached the river. When we walked out onto the bank we saw a few families fishing there already. Their kids were playing in the sand at the water’s edge; mom and dad were tending the lines. It looked like they were taking a day at the beach.

Neither Tim nor I had ever tried fishing for cats from a bank before, so we poked around for a bit until we figured out which family had the heaviest stringer, then asked how it was done. They called their technique tight-lining, and it was pretty simple; all they did was tie a loop in a line, attach a hook to the loop, and then a 3-ounce sinker to the tag. They’d bait up with a worm, cast the rig out, then set the rod into a hole drilled out of the bank with a sharp stick and wait. 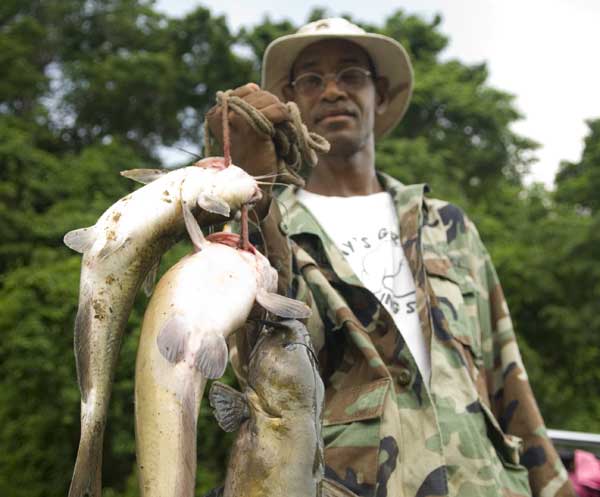 These folks were some of the friendliest people we’ve met so far on this trip. You’d think two Yankee boys decked out in fancy new gear would get the cold shoulder from the locals, but everyone bent over backwards to help us out. When I finally hooked a cat, a 15-pound blue that hit my worm after the sun had set, I think they got more excited than I did, whooping and hollering in the dark. One guy came running up the bank with a net, which was too small to scoop up the cat but big enough to help bat it onto the bank. It was a good thing he did, because just as the fish got to the shoreline the hook I was using pulled out, bent to hell from the fight.

The next day we drove through Memphis, and then Tunica, Mississippi, and then crossed the river into Arkansas at a town called Helena.

Helena is an old river town, incorporated in 1833, and it’s seen better days. Most of its buildings are boarded up, and many places are burnt. There are people everywhere (15,000 of them, according to the signs that mark the city’s limits), but most seem to just stand around, telling stories, sipping sweet tea, and not much else.

The further down the Mississippi we’ve traveled, the more we’ve seen of this. The river is a tough place to make a living, and it’s not gotten any easier with gas prices hovering around $4 a gallon. We overheard one farmer in a Dyersburg parking lot talking to a buddy about his truck. “When it hits five dollars a gallon,” he said, “I’m shuttin’ her down and buyin’ a scooter.” It’s a funny line, sort of, except that we just heard on the radio that GM is closing 4 truck and SUV plants. Big news in a place where two out of every three vehicles we’ve seen have been American-made pickups.

High gas prices are changing the river in other ways, too. We met an old guy named Scooter when we bought our Arkansas fishing licenses. He was working the counter at the Helena Wal-Mart, in the sporting goods section. He used to be a farm equipment repairman, don’t know how he ended up at a Wal-Mart. I asked him what people did around town for work. “This is an old agricultural community,” he said “Folks in these parts used to grow mostly cotton, but now it’s soybeans, the price they get for it is so high. And corn. Lot’s of corn lately. For the ethanol. ‘Course, they buying bigger tractors now, and that puts lots of people out of a job.”

This grain barge filling station was a local catfish hot spot in Helena.

When we first arrived in Helena, we drove around the town for a while, looking for someplace to get a line on the fishing. On one street we saw a man sitting in his yard at a table set up beneath a pecan tree, next to an old catfish skiff that looked like it hadn’t seen the river in five years. We figured he might know where to find the local bait shop, and so we asked him for directions.

What the hell, we figured, so we got out of the truck and went over to sit down with him. That’s when we realized he was sitting in a wheelchair, and that he didn’t have any legs. Turns out his name was Jimmy Jones, that he’d lost his legs to poor circulation (he told us this as he lit up his third cigarette in five minutes), and that he’d lived in the town all his life. I asked him why it seemed so depressed.

“It’s them drugs,” he said. “And them casinos ‘cross the river. Cain’t nobody keep no money in they pockets. And they ain’t no jobs here no more, either.”

Still, he didn’t seem that bothered by the whole thing, just wanted to help us with our adventure. He pointed us in the right direction, gave us some tips on jugging, then sent us on our way.

It seems like the more run-down the place we go, the friendlier most people seem, especially once they know we’re fishing.

Later that day I stopped at the town library, which is the oldest library in the state. The power was off when we arrived (”oh, that’s all right, it happens all the time”), but the ladies working there were as sweet as could be, and they all loved to fish. One of them was Kitty Norwood (at left in the photo below), who is 63 years old and has never lived anywhere but Phillips County. She marked on our map a secret deep-water cut that led from the river through a swamp and into a backwater lake. “It’s private land there, some kind of game reserve, but you can fish it so long as you don’t touch land.”

It’s where we’re headed next. 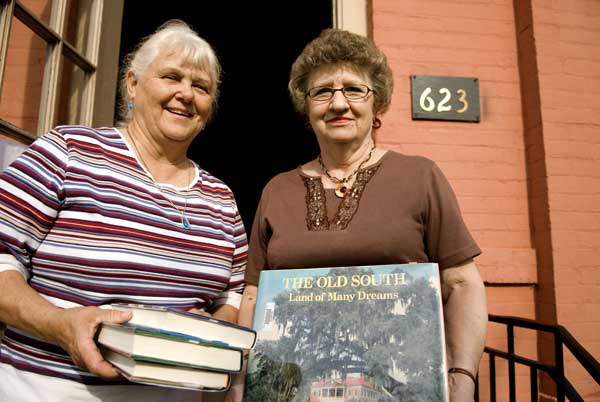