The boat we’re driving has a warning horn beneath its throttle that goes off when the engine overheats, something we... 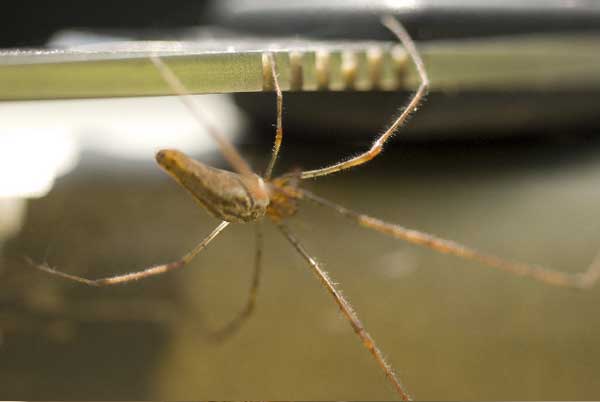 The boat we’re driving has a warning horn beneath its throttle that goes off when the engine overheats, something we learned when the thing started screaming at us deep in a swamp on the Mississippi side of the river.

We were in the swamp at the advice of a librarian, 63-year-old Kitty Norwood, who I mentioned in my last post. Kitty is a bit more extreme than your average Dewey Decimal expert. She’s fished the Mississippi her whole life, for stripers, catfish, largemouth, bream, and more, and has had her share of close calls on the river. She told me one story about how she got her boat stuck in a patch of mud, way back in a bayou. To get it unstuck she had to crawl out of the boat, but the bottom on which she’d hung was so soft that she started to sink. She got free, but she still had to free the boat, so she laid flat to spread out her weight, then spent an hour that way nudging the bow around and inching it through the muck toward deeper water.

“Don’t know what I’d a done if I’d gotten stuck much deeper.” She said. “Nobody’d ever have seen me again. That river’d have just swallowed me up.

” The swamp we were in led to a lake that Kitty said was full of fish, because it was surrounded by a private game reserve. You can only get to this lake during high water by following an unmarked channel that leads you first through a flooded forest of cypress and gum trees and then into a dense thicket of what I think are willow bushes. The mouth of this channel has clearly defined banks that tell you where to point your boat. But the deeper we motored into the forest, the harder it became to tell where we were going. Things got hairy when we hit the willows.

These were covered in two things; spiders, and duckweed. The spiders hung from the leaves and branches, and whenever we bumped a bush would fall off and land on our heads. Because they were spiders, they’d scuttle for the nearest available cover, which usually meant down our necks and into our shirts. This started the spider dance, in which one or both of us would jump around the boat and squeal, trying to shake them out. And that usually caused the boat to bump more willows, which started the whole thing over again.

The duckweed clung to the willow trunks and covered the water, obscuring the channel and hiding sunken logs the size of alligators. At first we could see where to go by following gaps in the brush. But the deeper we went the narrower the channel became, and eventually we were reduced to poling through the bushes, and where things got too tight for the pole, grabbing branches and pulling our way toward an opening we could see in the treetops ahead. 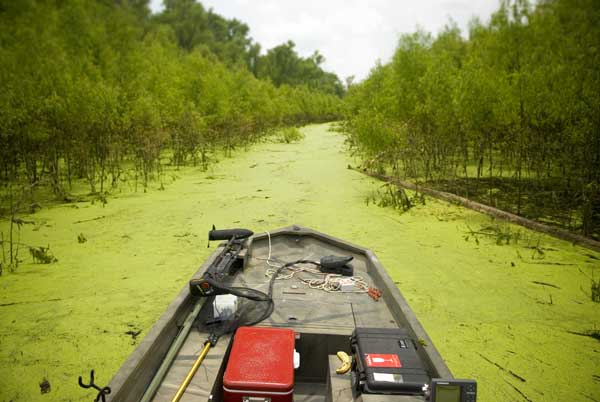 After about 20 minutes of this we emerged from the willows into a beautiful oxbow lake. In the main river, and in the swamp leading up to the willows, the water was muddy and dark, typical Mississippi coloration. But in this lake the water was clear, because duckweed strained out the sediment. And it was full of fish. We saw huge gar cruising beneath the surface, drum breaking in the flooded shallows, and catfish splashing everywhere. We rigged up with bobbers and worms and spent two hours reefing in everything that would bite. 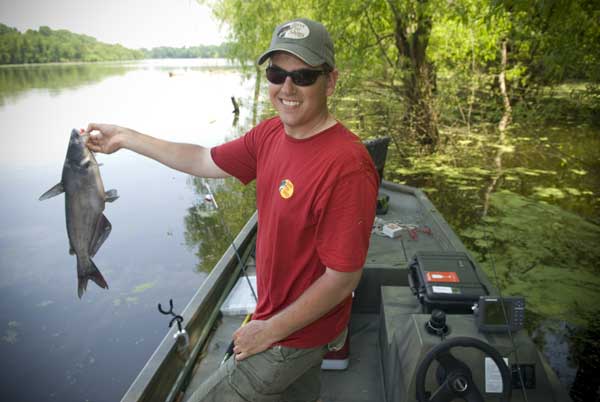 It was when we left that the problems started. While chugging back through the duckweed our outboard sucked a plug of the stuff into its intake valve. This kept it from cycling water through the engine, which caused the engine to overheat, which, about a mile into the swamp, set off that alarm. Which meant we were stuck in a bayou without an outboard, on the wrong side of the biggest river in the country. In flood stage.

We tried clearing the intake using a can of compressed air Tim had in his camera bag, but that didn’t work, and since we didn’t want to ruin the engine, we turned it off and poled our way back through the swamp to the big river.

Crossing the Mississippi had us worried. We were a mile upstream from the boat ramp, which was good, because the current worked to our advantage, but the creamy brown water rolling past looked scary as hell, and the occasional tree floating by didn’t do much to settle our nerves. Because we’d let the engine rest a while, we figured we could use it to get at least part the way across, so we fired it up and nosed into the current on idle. The water was deep, 80 feet in most places, and so turbulent it looked like it was boiling. We made it about halfway across before the alarm went off again.

At this point it seemed like we might use the trolling motor to get the rest of the way over, so we dropped it in, turned it on high, and I sat up in the bow and tried to keep our nose quartering into the current. Whenever we hit a boil it would suck at the hull, trying to pull us under, and when we’d hit the finger of an eddy we’d nearly spin around. Then we saw a barge loaded with chunks of limestone round the bend above us. It wasn’t moving fast, but it was enormous, and close enough to make us nervous. On the Mississippi, tug boats pushing rafts of roped-together, 1500-ton cargo scows are a common sight, and I’ve heard horror stories of barge bow waves flipping small boats like ours, so I was ready to fire up the outboard if it looked like we’d not be able to get out of the vessel’s path, regardless of the damage that would cause the engine.

Fortunately, though, we were far enough across that we could get out of the shipping lane before the barge reached us, so we only got knocked around a bit by its wake. When we reached the other side, we drifted downstream with the current, fishing the bank until we reached the Helena boat ramp, and thanking our lucky stars all the way.