It’s been three days since my last post (we’re having a tough time finding Internet for our computers in the... 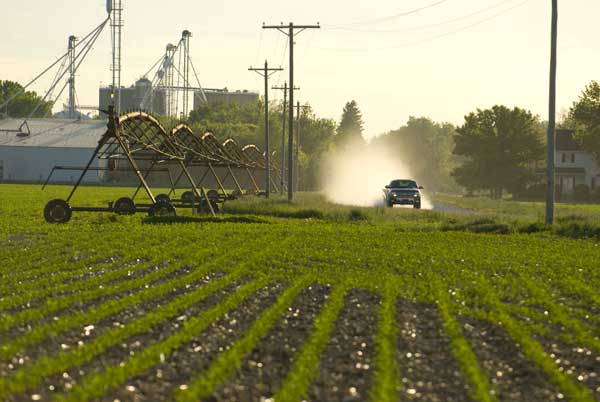 It’s been three days since my last post (we’re having a tough time finding Internet for our computers in the places we’re fishing), so I’ll use these few moments to catch everyone up on our travels.

Today is Friday, and we’ve been on the road for a week. On Wednesday we left Wisconsin, planning on fishing the Mississippi in Iowa. But when we got to the state the river was blown out; water over the banks and warnings on the radio. Even the park we’d picked to camp at was flooded, and so we ended up driving into the night to reach a dingy but dry alternate near the Muscatine, Iowa waterfront.

Besides not being underwater, this campground didn’t have much to recommend it, except that it was also mostly free of mosquitoes. For this we were grateful, because the rest we saw of Iowa was infested with the little bastards.

The part of the state we drove through was a vast collection of wet fields planted in corn, over many of which hovered massive, funnel-shaped clouds of bugs. At one spot Tim had me stop the truck because he wanted to take a picture of a particularly impressive swarm backdropped against the sunset. He got out and walked into the field, set up, and had barely snapped four shots before he turned and sprinted back, screaming and slapping at his neck and legs. It took me a while to stop giggling. A few of these mosquito tornadoes also hovered over roads, and so many insects got stuck to our windshield that at one point I had to hang my head out the window because I couldn’t see clearly enough to read a road sign. I think I still have wings in my teeth.

On Thursday we drove straight through Missouri, because Missouri was even more flooded than Iowa, and the few put-ins we checked out along the way dropped off into current that looked as if it could tear the trailer right off our truck. We stopped in St. Louis for a bite to eat and to snap a few pictures, and the water there was so high it had flooded the statue of Louis and Clark that stands near the Gateway Arch, on the city’s waterfront.

So we kept on going, and ended up pulling into Tiptonville, Tennessee around 10 in the evening. Tiptonville is near the Missouri/Tennessee border, and is the home of Reelfoot Lake, which was once part of the Mississippi River but, thanks to erosion and the New Madrid Eathquake of 1811-1812, is now a separate body of water. It’s the first of a number of oxbow lakes we’re planning to fish on this trip.

There’s a BP station in the center of Tiptonville that sells fishing licenses. When we purchased ours there from the counter clerk I realized just how far south we’d driven over the past two days.

In the morning we woke up early and dropped the boat into water for the first time in two days. Reelfoot looks like a bass fisherman’s wet dream, nothing but fields of lilypads and flooded groves of cypress, but the real attraction here isn’t largemouth, it’s bream. Big bream.

The lake is billed as “one of the world’s greatest natural fish hatcheries,” which sounds like typical tourism department hyperbole until you actually fish the place. Better yet, fish it all day like we did, then motor back in the dark, using a spotlight, during a blizzard hatch of huge midges. Words won’t do this justice, so here’s a short video clip Tim took to show you what I mean.

With so much protein around it’s no wonder so many bluegill grow so large in Reelfoot.

Most folks chasing bream here use long rods and slip bobbers to dangle worms and crickets in the cypress roots. I tried this for a while but didn’t catch much, and it got boring, so I tied on a tiny in-line spinner. That’s when I started nailing fish. The trick was to drag the lure through the shadows on the backsides of the cypress trunks, especially ones in backwater eddies where the water was covered with a bit of duckweed. The closer to the tree you could get the lure, the more likely the lure would get hit.

We caught a mess, and kept four, including one bumpheaded monster which was the largest bluegill I’ve ever hooked, as big as my hand and twice as thick. I filleted them up at a cleaning station near the boat ramp, and we ate the fillets pan-fried in onions and butter for dinner. It was good fish.