IN WHICH WE RAID BASS PRO SHOPS

Last night we spent six hours grabbing lures, rods, reels, line, and anything else that piqued our greed off the... 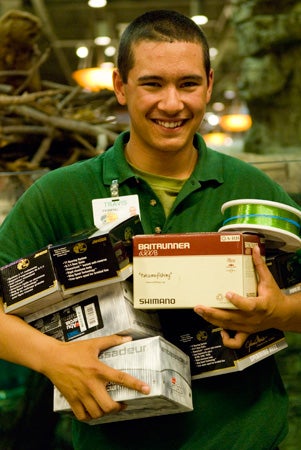 Last night we spent six hours grabbing lures, rods, reels, line, and anything else that piqued our greed off the shelves of the Bass Pro Shops Outdoor World store in Gurnee, Illinois. We were there until 10 P.M. — we actually closed the place down. Now it’s the morning after, and I feel like a fat kid who went on a feeding binge in a chocolate factory — bloated, happy, and slightly ill.

But I’m getting ahead of myself.

We landed in Milwaukee yesterday at one P.M. and picked up our truck, an overly shiny flex-fuel Avalanche, courtesy of Chevy. Milwaukee is nowhere near the Mississippi, but it is the closest airport to the Bass Pro Shops store that’s nearest the river’s headwaters, so it’s the place where we were scheduled to rig out and to pick up our boat.

Outdoor World stores are enormous, and slightly overwhelming, and so I was pleased to have the assistance of two outstanding young anglers as we selected the rods, lures, lines, and etc. we’ll be using on this trip.

Travis and Jake, both just 17 years old, work 40 hours a week, go to high school, and still find time enough to fish that they know as much about bass and walleye as any tournament angler I’ve ever met. They were, and I do not exaggerate, the most helpful sales staff I’ve ever had the pleasure to work with.

Here’s an example: Like other Outdoor Worlds, the Gurnee store has an enormous aquarium in its center that’s stocked with the biggest bass, walleye, and catfish you’ve ever seen. I always assumed these tanks were there for decoration. But Jake, the walleye expert (Travis prefers bass), uses it as a resource for teaching customers how to fish.

“See that fish sitting on that shelf sticking out from the dropoff, there?” he pointed. “That’s typical walleye. 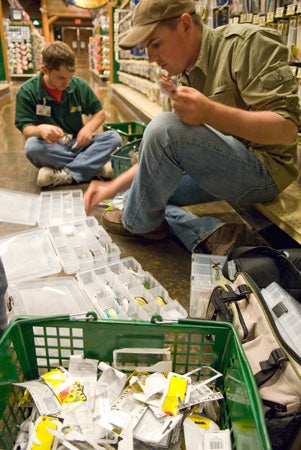 Look for a ledge, then cast out and drop your jig straight down the rock face. Leave your bail open so it’ll drop as vertically as possible, and be alert, because when a walleye takes it it’s not going to take it hard. Now that one’s a normal sized walleye, but see the big fish cruising in the deeper water, all by itself? We call that a rogue walleye. Sometimes you’ll find a pack of four or five rogues together, and they’re usually the biggest ones in the water. If you want one of them, use a slip bobber and fish open water.”

It was great fun pumping these kids for info, especially because I could tell they were having such a good time helping out. It felt like I’d enlisted two teenaged versions of myself as packing assistants. They bombarded me with questions about where we were going, where I worked, and how they could get my job, and were otherwise bursting with enthusiasm. We were living their dream, and by picking out our lures they make a piece of the trip their own.

Towards the end, as were were taking everything out of the packaging in the warehouse at the back of the store, one of the other employees walked by pushing a cart full of garbage and stopped to ogle the massive pile of stuff we’d accumulated. “Man,” he said, “That’s what I’d look like if I won the lottery!”

I could only grin and shrug. That’s kind of what it feels like when you work for Field & Stream.