Last night we camped at a place called Goose Island, which is in the center of a broad, braided network... 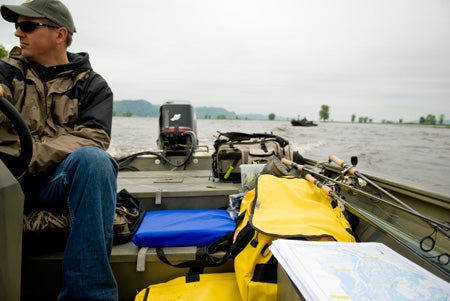 Last night we camped at a place called Goose Island, which is in the center of a broad, braided network of shallow sloughs and flats that spread out from the Mississippi’s main channel just south of LaCrosse, Wisconsin. It’s an unusual environment, formed because in these upper reaches the Mississippi doesn’t dig down much into the land, like it does further south. Here it flows over the top, and in places broadens and braids into myriad channels that are shallower than where the river runs whole.

Each of these channels are separated by islands, and most islands are covered in trees, which right now burst with new leaves. When you look out across the valley from the bluffs lining the river, it looks as if a forest is growing up right from the moving water.

This is quite beautiful, but also somewhat frightening, because unmapped flooded timber is not the best place in the world to familiarize yourself with a new boat. There are no channel markers, no caution bouys, nothing to reveal the stumps and rocks and other hazards that can rip the lower unit off a moving motor in less time than it takes a gnat to blink.

Our boat is a 17.5-foot aluminum Tracker Grizzly, the “Blind Duck” model, with a 50-horse Mercury off the back and a Minn Kota mounted on the bow. It’s a sturdy craft built to withstand hard knocks, and it’s stable as a barge, but it’s also not particularly large, and even diluted by braiding the Mississippi is strong, fast, and unpredictable.

I’ll admit to some trepidation when we put her in the water for the first time. We spent a couple of hours putting around aimlessly, getting to know the trolling motor and the depth finder and breaking in the engine. The few other boats out knew their way around; despite narrow, unmarked channels they’d often rip past us at full throttle, props throwing spray 15 feet in the air. When I worked up enough courage I started popping up on plane to follow them, and eventually we figured out enough of the area to start fishing.

The photo here is of our first fish of the trip! A small largemouth that smacked a white buzzbait I was dragging across the top of a weedy flat. We’re guessing bass are hanging out in the shallowest of these, soaking up the sun and staying out of the colder current (the water temperature is 65 degrees). It’s an assumption I’m going to test this evening, as soon as I post this and get back out there.

If you’ve got any tips for fishing braids in the upper river, or catching largemouths in Wisconsin this time of year, let us know! You can do so using the comment form below.