ON COLD WEATHER AND FRIED FERRETS

It is now clear that I don’t know much about walleye fishing. For two straight days Tim and I have... 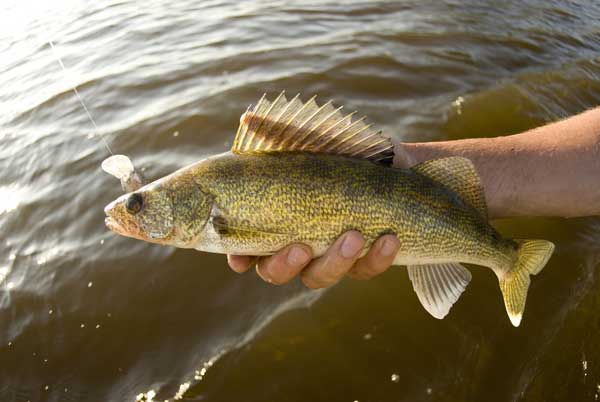 It is now clear that I don’t know much about walleye fishing. For two straight days Tim and I have trolled crankbaits, drifted worms, cast jigs, jigged minnows, dragged leeches, and tried just about everything else we could think of to tease them up, short of dynamite. We fished the downstream sides of points and islands, S-curve holes in the running sloughs, dropoffs along railroad riprap, wing dams, bridge pilings, and any other deep-water structure we could find on the depth finder. And the only walleye we caught was a small one that hit a deep-diving LuckyCraft (in rainbow shad) near De Soto, on the Wisconsin side of the river.

I’m tempted to blame this on the weather. 41 degrees last night, and the air wasn’t much warmer yesterday morning. The river is also dropping rapidly — since we started the trip it’s gone down nearly two feet. If I knew more about walleye, or about Mississippi tactics, I might be able to target the places fish go under these conditions, but this is big water, and it’s hard to get a handle on.

I’ve asked lots of folks for information, and most have tried to be helpful. One clerk at a tackle shop we visited near Prairie du Chein went so far as to mark the exact locations of all his best holes on our map. We fished as many of them as we could reach last night, staying out later than was particularly safe, and we still got skunked. We had to motor back to the launch through unfamiliar water in near darkness, our spotlight picking out bats and nighthawks dancing for bugs on the surface.

Other locals have been rather less accommodating. Two nights ago after a long day on the water we stopped off at a bar called Porky’s Hilltop (across the street from the taxidermist) to grab a brew and pump some tips out of the residents. Long story short, instead of getting info on the fishing, we got into a conversation with a rough-looking gentleman about the edible properties of small, woodland creatures. According to him, raccoon tastes a bit like bear, possum ain’t bad, and ferret (ferret?) is best if first drained of its blood, then deep fried whole, on a stick. We asked for the check when he started in on a recipe for rat.

Now it’s time for us to leave Wisconsin behind. It’s supposed to warm up tomorrow, and I’m guessing the fishing will improve, but we’ve got a long way to go on this trip. We’ll be camping tonight south of Muscatine, near where the Iowa River joins the Mississippi. Make sure to check out our map for the details, and for more of Tim’s great photos.