TO THE REDFISH FLATS

I knew it would be a mistake to wait until I got back to New York to write up the... 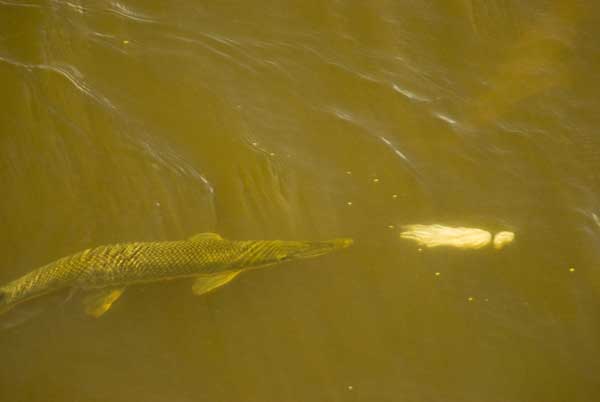 I knew it would be a mistake to wait until I got back to New York to write up the last few days of our trip. On the road it’s easy to concentrate; in the office everything conspires to distract you. I’m posting this now on Sunday, in a coffee shop on Manhattan’s Upper East Side, where there’s no phone, no Internet, and nobody to interrupt the writing process. Sorry it’s so late.

I left things off in Mississippi. After spending all day catching gar (see my last post for that story) we stayed the night in Vicksburg, and in the morning woke early and headed south down Highway 61 toward the Atchafalaya basin. This is a giant swamp that sits in the heart of Louisiana’s Cajun territory, an hour southwest of Baton Rouge. Through it flows the Atchafalya River, a major distributary of Mississippi’s waters.

There’s a pond in the center of this swamp called Big Flat, which looked interesting on our map because it was miles from any road. The only way to get there was to find a ramp on the river, run far upstream, then nose the boat through a maze of unmarked cuts into the bayou. This sounded difficult, but it was not, because the ramp we found was crowded with crawfish trappers who were happy to give us directions. 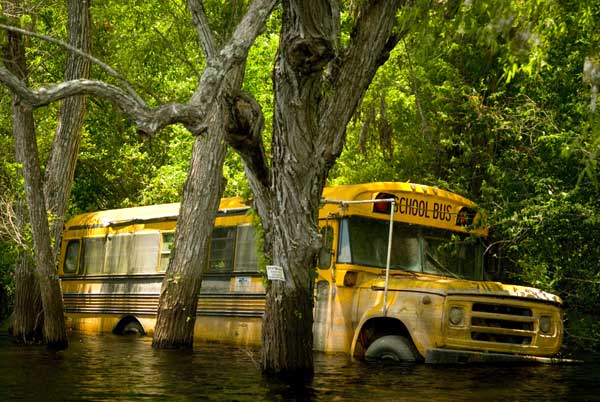 The trappers were there for good reason — we saw scores of crustaceans clinging to sunken vehicles, flooded cypress trunks, and other submerged structures in the swamp. This looked promising for the fishing, but we spent a long day flipping imitations into the trees without getting a bite. The only excitement came when Tim disturbed a nest of hornets as he was reaching to free my lure from where I’d wrapped it around a clump of Spanish moss. He got stung twice on the thumb, which swelled up to the size of a polish sausage. 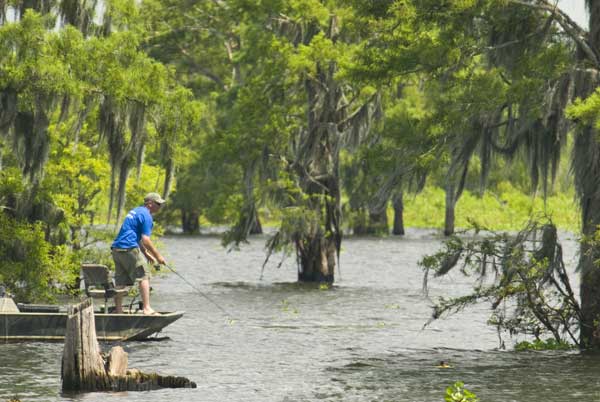 In the afternoon, when the heat and humidity became too intense (96 degrees in the shade), we gave up, pulled out the boat, and drove to New Orleans, where we rendezvoused with Alec Griffin, a friend of Tim’s who manages a fly shop in the French Quarter that’s called Uptown Angler. 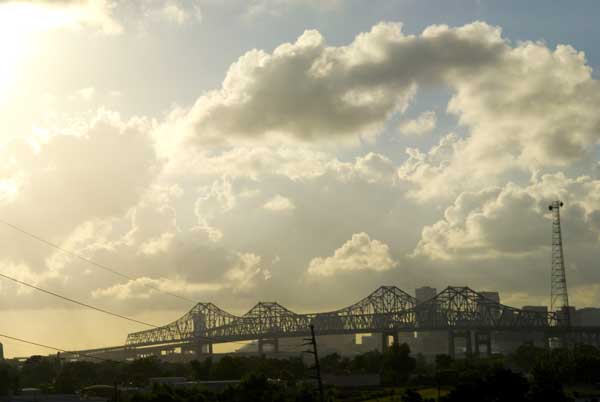 Tim met Alec after Hurricane Katrina while working for a charity created to help recreational fishing businesses hurt by the storm (Alec’s shop was looted during the flooding). Although he’s not a guide himself, Alec works with lots of them, booking trips into the grass flats that line the mouth of the Mississippi. We figured he’d be a good source of info on how to catch a redfish.

A brief aside: From Wisconsin on down we’d been fishing the Mississippi on our own, using no guides but the folks we met along the way. We did so because we wanted to meet interesting people in random ways, and figured a string of packaged adventures would cut down on such opportunities. But all trip long we’d heard horror stories about anglers losing their way in Louisiana’s saltwater flats, and this scared us enough that we decided to enlist some professional help. Also, we had no idea how to catch a redfish.

The professional was a retired Marine colonel named Rich Waldren. Captain Rich had already booked a couple of clients for the next morning, but Alec convinced him to let us follow him out in our boat to a good spot, after which he’d motor away and leave us to our own devices. I think he only agreed to this after he learned we had a GPS and knew how to breadcrumb our way back to the ramp. And that we’d have Alec along to help us pole the boat.

That night we stayed in an old plantation house called the Woodland Inn (the actual mansion illustrated on the label of a bottle of Southern Comfort) and in the morning met the Captain at a foul-smelling put-in on the west side of the river. He took us through a maze of shallow channels to a wide bay surrounded by marsh grass, wished us luck (and gave us a few pointers), then headed with his clients deeper into the flats. 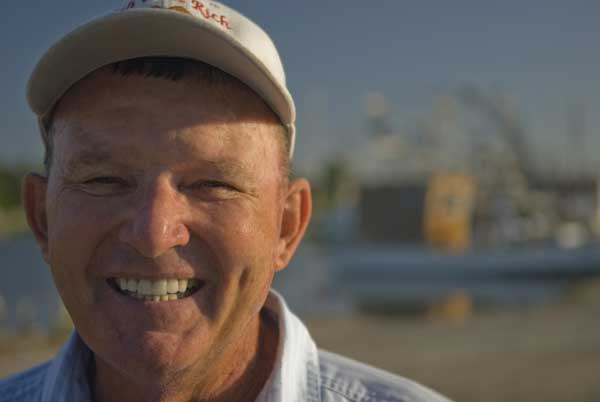 Alec stood on the stern and poled us along the edge of the bay. I tied on a weedless gold spoon and started casting it toward the banks, trying to drop it into the water as close to the grass as my skills (and a stiff wind blowing in from the gulf) would allow. On the second cast I hooked a huge flounder, which dropped off just as we got it to the boat. A half-hour later I caught my first redfish.

We’d poled from the bay into a narrow tidal creek, looking for tailing fish, when I noticed a disturbance in a tiny cove protected by a grassy point that ran just ahead and to the right of the boat. The wind was blowing from behind us, so I cast high and let it push a big belly into my line. The lure landed in the cove, and the mono lay down in an arc that curved perfectly around the point. I started reeling, and the fish hit just as it rounded the corner.

If you’ve never seen a redfish chase a lure in shallow water, find a way. As soon as it saw my spoon the fish humped up and charged, throwing a wake and kicking up clouds of mud. I’ve never seen one attack with such intention. It also fought like crazy. I was using a medium-action bass rod with 8-pound-test line, and there were a number of moments when I was sure I’d lose the fish, which wasn’t even large, by redfish standards. They say you can catch 50-pound bulls on these flats in the fall.

We spent the rest of the day hauling in reds. I also caught another flounder, and Tim caught a small sea trout on his fly rod. By around one we were happy, exhausted, and after 16 straight days on the road, about ready to die of exposure, so we headed back to toast our success in the southern comforts of the Woodland Inn. One more day to go.