“The Big One” Falls on Halloween

Our “Best Days of the Rut” issue just hit newsstands a little bit ago, and already we’ve heard of a... 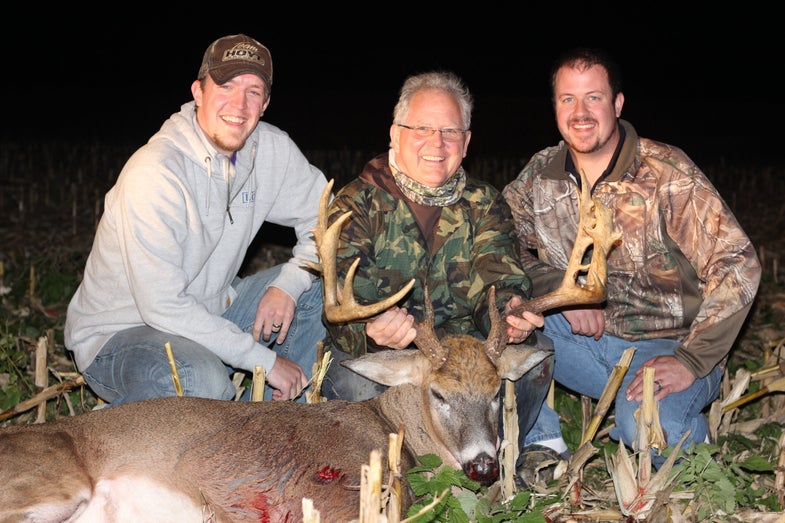 Our “Best Days of the Rut” issue just hit newsstands a little bit ago, and already we’ve heard of a great buck being taken on one of our predicted dates. The last day of October is always a good time to target a big buck, but this year was exceptional for Glen Craven, a Minnesotan who hunts in the Gopher State’s Goodhue County.

“We’ve been after this mature buck for two or three seasons now,” Craven says. “My stepsons and I, who manage a small property by planting food plots and establishing sanctuaries, just referred to him as ‘The Big One.’ It was hard to lay eyes on this buck, as he was largely nocturnal. All that changed in late October, when our cameras started getting him in daylight.”

Craven took advantage of the sudden uptick in daytime movement on Halloween day. “I had a ground blind in a valley, and I went in there in early afternoon,” he says. “After a while I could hear movement about halfway up the hill in some thick cover. When I looked up I could see the antlers of the buck we knew was The Big One.”

Craven watched the buck move down in the valley bottom, over 100 yards off. “I grabbed my grunt tube and called to him,” he says. “Suddenly a doe broke from cover and headed my way. The buck followed, but he locked up when he hit my scent stream. It was right on the edge of my effective range, but I knew it was now or never. I took the shot and it was perfect. After three years of pursuit, The Big One was down after a 50-yard run.”

Craven’s buck, which sported 17 scoreable points, grossed in the 170s B&C—but Glenn was not as concerned with measurements as he was with the hunt. “It was pretty incredible, putting my tag on a buck that we’d been chasing for three seasons,” he said.