Blades of Glory: The Best Bladed Lures for Spring Fishing

How to catch more walleyes, bass, pike, and muskies on spinner rigs and bucktails

Why do blades adorn so many different lures designed to catch so many different types of fish? Three reasons: flash, vibration, and sound. It doesn’t matter if it’s the tiny teardrop of a walleye spinner or the massive bangle on a muskie bucktail, blades of all shapes and sizes send thumping underwater signals that make big fish hit. All kinds of big fish. Spinnerbaits win bucketmouth tournaments and pull monster pike from northern bays. Bucktails catch more muskies than every other lure combined. Spinner rigs are the classic choice for trophy walleyes, and blade baits dupe the biggest smallies. While blades work year-round, their ability to draw reaction strikes in the spring is unmatched. With northern lakes just past ice-out and southern ones yet to warm, lethargic fish can be incredibly difficult to catch. They need something to wake them up, get their attention—even piss them off a little. And nothing agitates big spring fish more than a vibrating, flashing, annoying piece of spinning metal. With so many ways to run so many different bladed lures, we asked four of the country’s top trophy-fish hunters to reveal their No. 1 spring blade tactic. Here are their secrets.

Lake Mille Lacs is renowned for its toothy predators, and while longtime area guide Steve Scepaniak focuses mainly on the lake’s muskies in summer and fall, he turns his full attention to huge pike early in the season. “There’s no better time to score a giant than in the spring,” he says.

And there’s no better lure to catch them with than a big spinnerbait. “Of the 700 or 800 pike over 40 inches I’ve had in my boat, I’d say three-quarters of them have come on spinnerbaits.” For every one of those spring spinnerbait fish, the lure was allowed to sink in the water column for a few seconds before the retrieve. “This is the most important detail for catching pike now,” Scepaniak says. Other times of year, a fish may come up to grab a lure, but not in the spring. “Getting it down to them is the key.”

By now, pike are done spawning, but they haven’t left the shallows. “In April and May, large post-spawn females will hang in back bays before moving out as the water warms,” says Scepa­niak, who starts targeting these fish when water temps are in the low 60s. “The first thing you have to do is find the cabbage,” he stresses. Keep your boat around 12 feet deep, and look for the vegetation in 4 to 6 feet of water. Almost any cabbage bed will hold at least some pike in the spring, for a couple of reasons. “First, the structure of cabbage provides optimal ambush sites for pike,” he explains. “Second, the broad leaves of cabbage produce lots of oxygen, which attracts zooplankton and phytoplankton, which attract baitfish, which then attract northerns.” Scepaniak works large spinnerbaits low and slow in the water column to ply the deeper cabbage leaves. “Run it just fast enough so that the blades are barely spinning—no faster,” he says. The lure only needs to give off a little vibration. “The pike will home in on that, and eat.”

Scepaniak uses a number of commercially made spinnerbaits at this time of year, but every one of them, including his favorite Rad Dog, gets one mandatory alteration. “I switch out every blade on every spinnerbait to a No. 8 Colorado,” he says. “The immense vibration of that big round blade is essential to catching big pike.” Most pike and muskie spinnerbaits have a small split ring where the blade is attached, making it easy to change them out. “All it takes is some spare No. 8 Colorados and some split-ring ­pliers to get more vibration—and catch more fish.”

Running bucktails for muskies often involves huge, double No. 10 ­Colorado blades. But not at this time of year, says Mike “MJ” Hulbert, who’s known for boating trophy muskies. “In spring, I throw small, weighted bucktails at stupid warp speed to get reaction strikes from fish that aren’t yet fired up,” he says.

Regardless of where you are, muskies will spawn in the weeks after ice-out in back bays and shallow flats—and that’s where they’ll stay for a while, recuperating in a lethargic post-spawn phase. “I try to pick them off before they head back out to open water,” Hulbert says. “I focus on rocks, riprap, and newly emergent green weeds in 3 to 6 feet of water.” Weather can be a huge factor too. “I’ll start targeting these fish when the water creeps into the 60s, but I also pay particular attention to warming trends, when the water may spike a few degrees,” he says. Southwest winds and rising humidity usually mean better action too.

No matter what the conditions, the real key lies in getting these torpid, zoned-out, post-spawn giants to wake up and ­react. That’s where burning small bucktails comes in—but there’s a trick. In order to achieve warp speeds while still keeping these relatively light baits under the surface, Hulbert puts some weight on. “No factory bucktail is heavy enough for this application,” he says. “If you’re a tinkerer, you can cut the shaft of the bucktail, slip on a 3⁄4-ounce egg sinker, and retwist.” If not, just attach a 3⁄4-ounce bell-shaped bass-casting sinker with a small split ring, placing it near the skirt where it won’t impede the blade action or hookup ratio.

As a side benefit, that extra weight greatly improves casting distance. Covering a ton of water is key to this tactic, so making bomb casts is a must. Or as Hulbert puts it: “The one who casts the farthest is the one who gets bit.”

Lake Erie is synonymous with donkey walleyes, and no one is better at catching them than guide Ross Robertson. “In April and May, I’m buying nightcrawlers and fishing spinner rigs,” he says. “Crankbaits can smoke fish under certain conditions, but trolling a spinner rig gives me the versatility to catch fish all day during various stages of the spawn.” The spinner’s blades get a walleye’s attention, but even if that fish is finicky, the scent of live bait combined with a slow presentation often seals the deal. “The crawler is the closer,” says Robertson.

On big lakes, he targets walleyes that spawn near the main reefs. On smaller lakes and rivers, he keys on tributaries and smaller reef structures. In both areas, fish will trade to and from the spawning ground, and Robertson nabs them on the move. “I focus on the first transition to deeper water,” he says. “In this zone, fish can be anywhere from 12 to 40 feet deep, so it’s important to use your electronics to pinpoint fish.”

Walleyes are slow-­moving now and often glued to the mud. “Spinner rigs can be trolled on or just off the bottom to reach them,” Robertson says. “The key is to make very subtle changes in boat speed to vary the depth and get your rig where the fish are.” Speeding up or slowing down even 0.1 mph can have a huge impact. “As a rule, 1 mph is a good place to hover,” he says. Then just add or subtract. But not too much: “At any speed lower than 0.7 mph, the blades stop spinning; faster than 1.4 mph, and the rig lifts too high off the bottom.” The trick is to find the sweet spot. You’ll know when you get it right, Robertson says, because you’ll start slamming walleyes.

For over-the-­counter spinner rigs, Robertson likes the Silver Streak Crawler Harness, but for optimum success, he suggests that you take the time to make your own. “I start out with 20-pound Sunline fluorocarbon because it’s durable and stiff, which means fewer tangles, and because it runs better at slower speeds.” The most important element of the rig is a super-sharp hook, he says. “I go with a No. 2 Gamakatsu octopus for the front hook and a No. 8 round-bend Gamakatsu treble hook as the trailer.” For the hardware components, Robertson prefers Dutch Fork quick-change clevises and No. 5 Spro power swivels. “Finally, I get plenty of No. 5 and No. 6 Colorado blades and No. 8 Indiana blades in a large variety of colors and finishes so I’ve got plenty of ­options with my finished rigs.”

Bass: Be a Blade Runner

It’s not every day a BASS Elite angler shares his secrets, but longtime pro and Pennsylvania native Dave Lefebre told us that he’s been using blade baits in the early season on the sly for years—and that he’s zeroed in on a spring pattern that slams trophy bass during their spawning transition. Throughout most of the country, both largemouth and smallmouth bass are in some phase of the spawn in April and May, but their exact location and activity level varies. “You can’t pick a more complicated two months to fish,” says Lefebre. You need a versatile lure to score. “My go-to now is a Steel Shad blade bait in any natural baitfish color.”

When targeting smallmouths, he looks for steep breaks adjacent to spawning flats. “Any irregular features such as small points or humps will sweeten the spot.” Early in the spring, he pinpoints fish on these deeper structures with his graph, and then vertically jigs the bait right under the boat. As the spawn progresses, he moves up onto the spawning flats and makes long casts with the same bait to cover lots of water quickly. “I use a fast, straight-line retrieve to pull reaction strikes.” 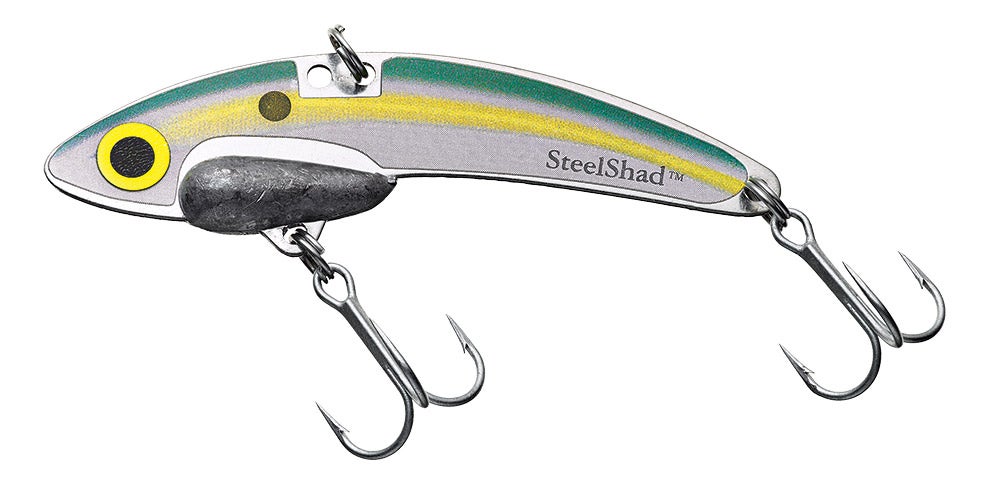 For largemouths, Lefebre focuses on structure in 2 to 5 feet of water. “Old dead grass from the year before or new emergent grass will attract spawning fish,” he says. He starts with the deepest grass first, focusing on any irregularities. As the water warms, he again moves up and dissects the flats, looking for holes, sand, and grassbeds. His approach here is similar to that of working a bass jig. “I pitch the blade out to the target, let it fall to the bottom, snap it up a few times, and repeat,” he says. If the bait catches grass, give it a sharp pop to clear the hooks and continue your retrieve.

Bass are not actively feeding at this time of year, so the key is to goad them into striking. “Blades are the best reaction baits on the planet,” Lefebre says. Their ability to sink fast, produce high flash and vibration, and closely imitate a minnow are a proven combination for inactive fish. “You can fish a blade anytime of year, but it’s my deadliest bait in the spring.”

Lefebre makes his blade baits even more effective on spring bass by making a pair of tweaks. First, he likes to introduce a little extra flash. “Models like the Steel Shad are available in a ton of different colors, but adding a bit of reflective tape is quick and easy—and it can make a huge difference,” he says. His second tweak is to remove the front hook. “This is the one that snags most frequently. For covering a lot of water around docks, logs, and vegetation, having only a back hook makes life easier, and it doesn’t seem to affect my hookup ratio.”