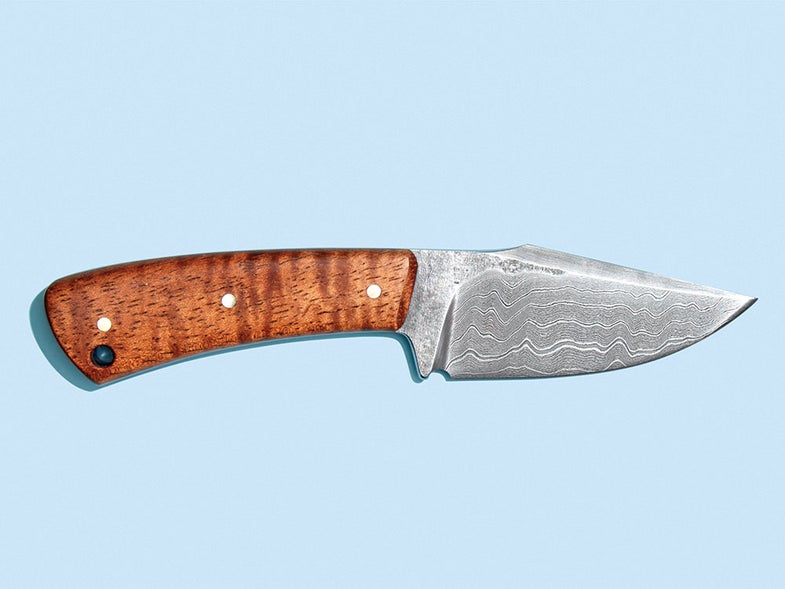 Foot-long orange flames lick from the doors of the forge. “That’s called the dragon’s breath,” Scott McGhee says. “That tells me I’ve burned just about all the oxygen out of the forge, and that’s what I want. Oxygen will rust the steel faster than I can put it together. Let’s go.”

I hoist a stack of 29 metal plates, each the width of a paint-stirring stick and half as long, welded to a 4-foot metal rod. Earlier, I’d arranged them to McGhee’s specifications: plates of 1095 high-carbon steel and 15n20 nickel steel stacked like a deck of cards in a carefully considered pattern.

The stacked steel slides into the forge like a pizza into an oven. McGhee nods his assent. He is lean and tall, with a scruff of gray hair. He wears a heavy canvas kilt and Danner hunting boots. The forge is running at 2,315 degrees, and it doesn’t take long for the edges of the metal to brighten and glow. In five minutes the entire stack of steel is a brilliant block of radiant orange.

“There it is,” McGhee says. “That’s how Damascus steel is born.”

Few can resist the allure of Damascus steel. Made of two or more steel types welded together, Damascus seems alive, rippled like flowing water. McGhee, one of only 118 living American Bladesmith Society Master Smiths, is known for his intricate Damascus steels, some of which carry the shapes of snowflakes and dragons. But when Damascus forging techniques were first developed, in the Middle Ages, it wasn’t the art of Damascus that mattered as much as the science. Forging high-carbon and low-carbon steels together produced a tough material that could take a beating and still keep a wicked edge. “The pretty patterns were irrelevant,” McGhee says. “With Damascus steel, you could bash a few helmets and still use the same sword to cut a couple of Crusaders in two. It was the nuclear bomb of the time.”

Today’s modern Damascus steels are variants of the original, as the forging techniques from the medieval periods have been lost. But that doesn’t lessen the appeal of pattern-welded steel. It’s difficult to master and expensive to produce. When McGhee invited me to his Guinea Hog Forge in eastern North Carolina to help build a billet of Damascus steel, I almost jumped in the truck that afternoon. But McGhee warned me: It would take a full day to produce a glob of steel that looked pretty much like a glob of steel. At least on the outside.

I was fine with that. I knew what a Damascus steel knife looked like. But I didn’t know how it felt to melt metal, to pound steel, to stack and restack and forge hundreds of layers of metal to create the raw material of so much awe.

In McGhee’s shop, once those initial 29 layers of steel soften in the forge, we pull them from the heat and pour on the pressure. McGhee shows me how to guide the billet into the jaws of a 50-ton hammer press, sweat draining down my forehead. The machine is operated with a foot pedal, and the harder I press, the harder and faster the hammer’s upper die smashes into the billet. I’m tentative at first, but once I get the hang of it, I stomp pretty hard. Each smash of the die mushes the steel as if it were a loaf of bread, sloughing off glowing slag and embers. Next I walk the billet over to a 250-ton hydraulic press, which works the same way, but this time flat plates crush the metal loaf, mashing the layers into one another.

The two machines move the steel in different ways, McGhee explains. The hydraulic press is pure, inexorable force. As it mashes the steel in one spot, it squirts the semimolten material through the matrix. The hammer press, though, imparts massive shock, like a straight-arm jab to the jaw. That’s how you get the radial line patterns, like a topographic map in steel.

Choreographing the two, McGhee says, “is the beautiful thing about making Damascus. Every billet is different. You’re never going to hit it with the hammer, or draw it through the press, the same way twice. And the steel remembers every crush and blow. I can control it, and I cannot control it. It’s a live performance, every time.”

Once it has cooled, we cut the billet into three pieces, weld them together, and repeat the process: Heat in the forge, hammer and press, cool, cut, and restack. The 29 layers of steel are now 174. Another restack, with more fire, more hammer and smash. After a last forging, the billet contains 522 layers in a pattern McGhee figures will earn the name “Shockwave.” It’s been six hours since we first walked into the shop.

We take the billet out of the forge and let it cool. It looks like a brick of molten gray ash. Like a raw diamond, it requires more work to pull back the covers of its beauty, and McGhee is a bit apolo­getic. “You might look at that and see a gray lump of steel,” he says. “But I see hot, sexy knives in there.”

I’m not so far behind. I know it will take McGhee another week to cut and grind, harden and temper, acid-etch, and sharpen the blades—not to mention hand-build the handles and helve each knife. This billet of Damascus steel is destined for his signature Piranha hunting blades or perhaps a few larger private-order fighting knives for Special Forces soldiers. I can’t confess to seeing those swords in the stone as does McGhee. But after a full day in the shop, I can feel their weight in my tired, grimy hands, and envision the steel we made, folded, melted, and beat, like the blades of the ancients, cutting through time.