Blast from the Past: Garand’s Garand M1 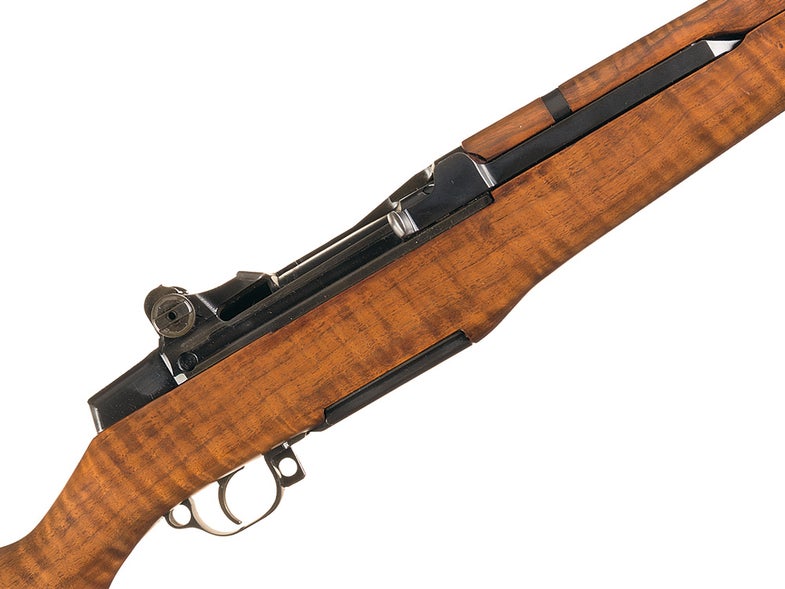 Earlier this year we featured the M1 Garand made for General George Patton, who died before the rifle could be presented to him. This week we have another presentation M1, this one given to its inventor, John C. Garand, in 1953. The rifle was made in 1942 and bears the serial number 1,000,000 out of about 6 million M1s made.

The rifle has been in private ownership, first in the Garand family, then owned by collector and NRA president Allen Cors, until now. It goes on sale at the Rock Island Auction next month, during the September Premiere Firearms Auction in Rock Island, Illinois, September 7-9.

Born in Quebec in 1888, John C. Garand, one of 12 children, moved with his family to Connecticut and worked in a shooting gallery, as a machinist in a textile mill, and as a tool and die maker. He combined his interests in invention and target shooting by becoming a gun designer, working as engineer at the Springfield Armory from 1919 to 1953. It took 15 years to perfect the gas-operated rifle that would become the M1. Garand patented the design in 1932, and the rifle was delivered to the Army beginning in 1937. The M1, incidentally, was nearly chambered in .276 Pedersen, until Douglas McArthur, then the Army Chief of Staff, disapproved it, as there were already huge stocks of .30/06 ammunition on hand.

Garand received this presentation rifle on the occasion of his retirement. It comes with a walnut case, eight dummy cartridges, a gold en bloc clip, as well as a collection of documents and photos. You also get Garand’s drafting tools and awards.

Among the papers is a check for $1, sent to Garand by a Dorothy Jerome of Helena, Montana, who wanted him to have a “share of what is due…for his invention of the M1.” Garand never cashed the check, nor was he ever given extra compensation for the M1, as he claimed he had been promised after he turned down private offers for his invention and gave it to the government. Attempts in the early ’70s by congress to award him $100,000 were opposed by the Department of the Army, and he never received compensation other than his government pension. He did get a nice rifle, though.