Blast From the Past: Remington Model 51 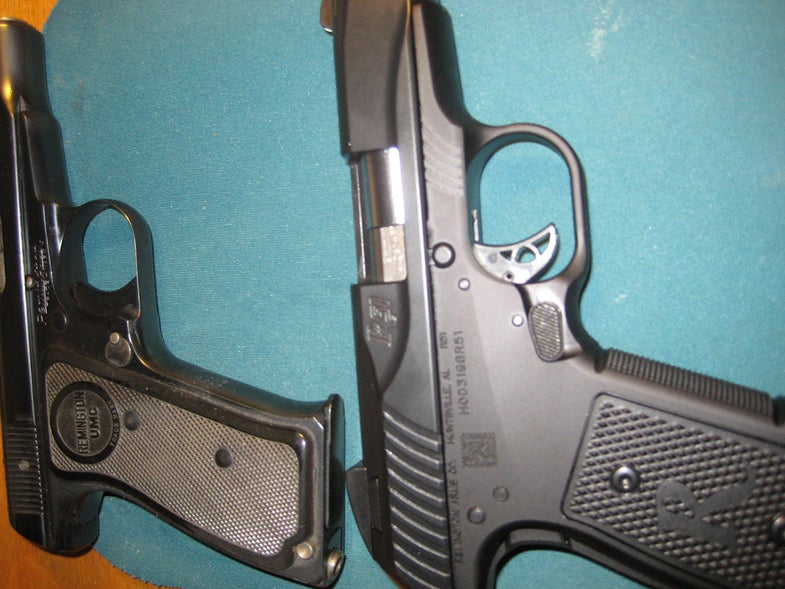 Today we have the original Remington Model 51, the pistol that inspired the recent (2014) R51. Made in .32 caliber and .380, the Model 51 was ingeniously designed to be as compact as possible. Its “hestitation lock” action permitted its slide to be slimmer and lighter; the return spring went around the barrel, not underneath it as with most pistols, lowering its profile. Its single-stack, seven-round magazine sacrificed firepower in favor of trimness. The Model 51 was supposed to be so ergonomically perfect that it was billed as “self-aiming.” Therefore, it had only the most rudimentary of sights, which weren’t big enough to snag on anything, contributing to its excellence as a pocket pistol. About 64,000 Model 51s were made.

My original Remington 51 is a .380 and was made in 1927—an all steel .380 pocket pistol I bought it in 1967 and carried for about 15 years. Remington lauded the Model 51’s natural pointing characteristic as making the gun point “like an extension of the hand.” I just bought the currently manufactured Remington R51 in 9mm +P and it has all the original attributes of the 1927 Model 51, plus a few new benefits. It has adjustable sights and all rounded corners. I think production of the original was from 1918 to 1926. Remington was light years ahead of other manufacturers.

Thanks for the picture, and for the bonus thumbnail review of the R51, which had a rough start but is now much improved. Keep the gun pictures coming to fsgunnuts@gmail.com.

Blasts From the Past
Guns
Handguns
Remington Arms
Shooting