Blast from the Past: Winchester Model 99

A reader shows off his father’s unusual “Thumb Trigger” .22 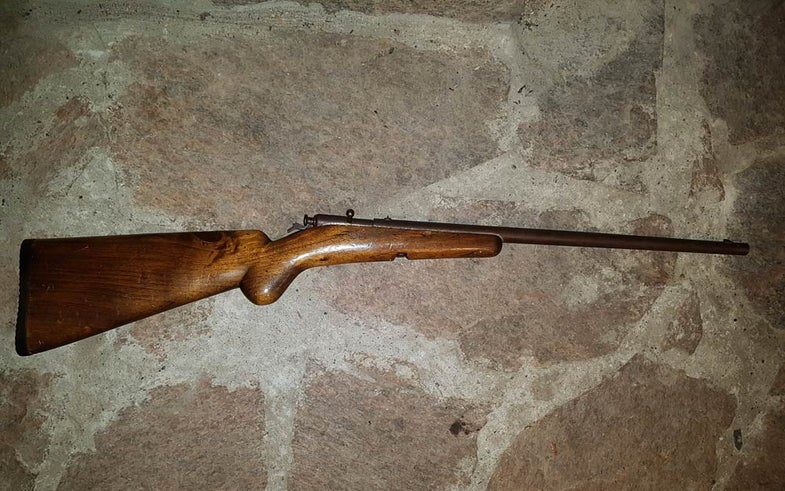 This Winchester Model 99 .22 has a trigger that you fire with your thumb. From Barney
SHARE

Today’s Blast from the Past is a real oddity: Winchester’s Model 99 rifle, a single-shot .22 rimfire. “Where’s the trigger?” you ask. The Model 99 was originally known as the Thumb Trigger Winchester, and it was made from 1904 to 1923. The trigger, such as it is, is the piece beneath the cocking piece behind the receiver.

As this video shows, you fire the rifle by pulling the cocking piece back until it catches on the trigger, then depress the trigger with your thumb, releasing the hammer. Apparently, the idea was that people with missing fingers or arthritis or other conditions that prevented them from pulling a conventional trigger could fire this rifle, although in practice it was largely a boy’s rifle.

This unusual gun was purchased by my father about 1928 for 35 cents (used). When he acquired it, there was no stock, so he made one from a piece of butternut wood from the woodpile. The butt plate was fashioned from a battery casing. He used it throughout his youth, including the time he gave the coup de grace on the first jack rabbit he’d ever encountered in our part of the world, which was near Cobourg, Ontario, where the Cooey gun factory was located.

Cooey was a Canadian gun maker of such arms as the Ace Repeater, Cooey Repeater, and Canuck 25. In 1961 Cooey sold to Winchester Canada, and Winchester guns were made there until 1973, long after the Model 99 was discontinued.

The Model 99, unlike most cheap rifles, has some collector value today, and you’ll see guns in good condition selling for several hundred dollars or even more. This one, despite the nice job on its homemade stock and buttplate, doesn’t have much value to a collector, but it’s a great piece of family history and a very interesting gun.

Rifles
Blasts From the Past
gun nuts
Winchester