Blasts From the Past: A Lend-Lease Enfield 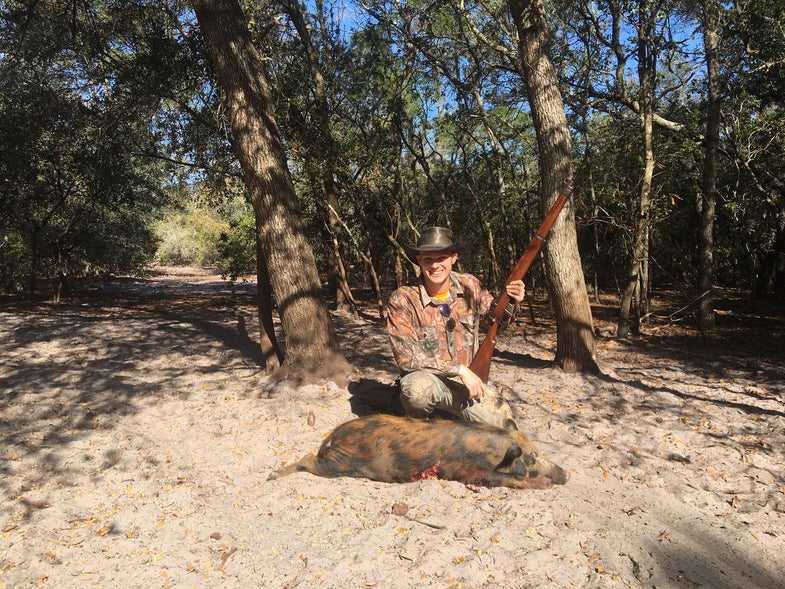 Cameron and his Enfield after a successful pig hunt. From Cameron
SHARE

Today’s Blast from the Past is an artifact of the Arsenal of Democracy. The Lend-Lease Act of 1941 allowed the United States “to sell, transfer title to, exchange, lease, lend, or otherwise dispose of, to any such government [whose defense the President deems vital to the defense of the United States] any defense article.” Through it, the U.S. provided billions of dollars’ worth of weapons to the fight against the Axis.

Under Lend-Lease, U.S. companies took over the manufacture of the Mk I Enfield rifle (these were .303 rifles, not to be confused with the .30/06 1917 Enfield of WWI we discussed recently in this space). Savage-Stevens built these rifles at the Stevens plant in Chicopee Falls, Mass., between March 1941 and June 1944 at the rate of nearly 1,000 a day. Most of the rifles went to Great Britain, with about 40,000 going to China. My knowledge of Lend-Lease is sketchy, but I believe much of the equipment was never fully paid for, nor did we expect it to be, and we took payment in kind (leases on naval bases, that sort of thing).

This is my Savage No.4 Mk 1 Enfield. During WW II Britain was in dire need of war material and the U.S. was happy to help, for a price. Under the Lend-Lease Act, Savage Arms produced over a million Enfield rifles, complete with “US PROPERTY” stamped on the receivers. This particular rifle was not returned to the U.S. after the war but was sold back through Century Arms, which is headquartered just over a hundred miles from where the rifle was built. From my understanding of the markings, this rifle was not rebuilt and maintains matching numbers throughout.

Beyond what this warrior may have done in the war and for the decades before I bought it, it has served me well was a pig hunting rifle. Certainly there are better choices in my collection but it’s an experience few of my generation get.

The .303 Enfield, being the British military-issue cartridge during a time when the sun never set on the Empire, has taken just about every animal in the world that can be shot with a rifle, so there’s no reason it wouldn’t make an excellent pig rifle. Congratulations to Cameron for taking that old rifle into the field.

Please keep the Blast from the Past guns coming to fsgunnuts@gmail.com.