Blasts from the Past: Louis XV’s Lorenzoni Repeater

This flintlock repeater is so beautiful, it’s fit for a king 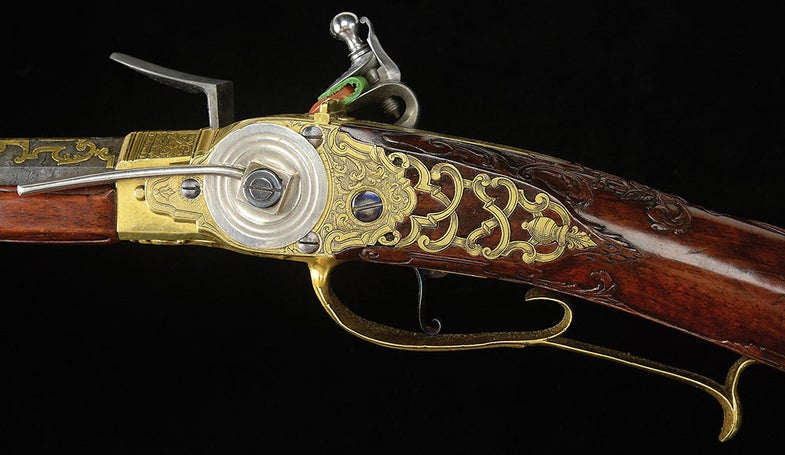 Today’s gun is a real rarity: a flintlock repeater. And, if that’s not rare enough for you, it’s a King’s flintlock repeater—made for Louis XV of France in 1735. This rifle uses the ingenious Lorenzoni system, which is a sort of built-in speed loader. There are two magazines that load through the butt of the gun: one for powder, one for balls. You turned a lever on the left side of the receiver, and it dropped powder first, then a ball into a rotating cylinder, and cocked the hammer. Turning the handle back aligned the chamber with the barrel.

This video of a Lorenzoni pistol shows you how it works. The Lorenzoni system was devised in 1680 in Italy and was made across Europe and eventually to the United States. Although widespread, it never become truly popular.

This particular gun was made by Sebastian Hauschka, Court gunmaker for Prince and Duke August Wilhelm von Braunschweig-Wolfenbuttel and presented to Louis XV as a gift. It’s good to be the king.

The stock is covered with elaborate silver inlay, and there’s plenty of gold, too. There are portraits of Louis all over the gun, including a hidden cameo in the comb of the stock under a spring-loaded, engraved gold lid.

The gun almost didn’t survive the aftermath of World War II. A U.S. Army officer saw the inlaid stock sticking out of a pile of guns to be burned and rescued it. His heirs are selling it at James D. Julia’s spring auction in Maine on March 21-23 where it is expected to bring somewhere in the neighborhood of $175,000-$275,000, which strikes me as affordable for a king’s flintlock repeater. You could be able to buy one of these new for that kind of money today, if anyone still made them. Julia auctions recently merged with Morphy Auctions in Pennsylvania, incidentally, and this will be their last sale ever held in Maine. This gun is one of many highlights of the sale.