Blasts From the Past: MacNaughton Bar-in-Wood 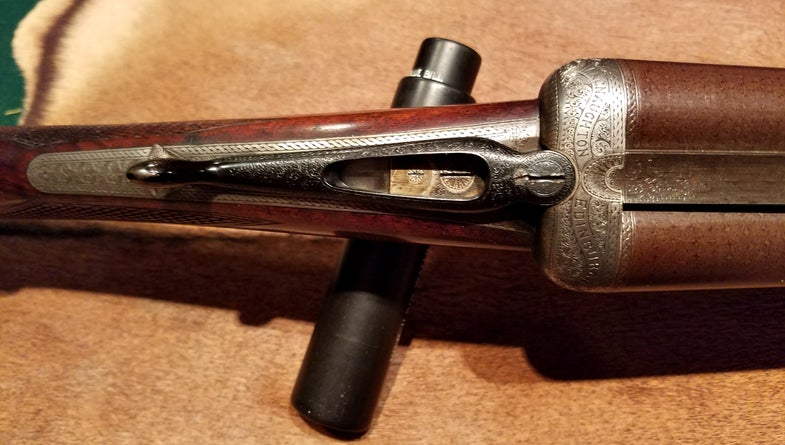 This beauty is truly rare with only about a hundred of these guns in existence.. Submitted
SHARE

To my eye, the round action, as perfected by Scottish gunmakers, makes the most graceful and elegant shotgun of all. The round action is a type unto itself, neither boxlock nor sidelock. It’s a triggerplate design, meaning all the parts of the lock are attached to the trigger plate. The ejector mechanism of a round action is in the action, not the forend, so there need only be two small holes cut in the action, not the larger slots found in other guns. Because of this, round actions can be made trimmer and lighter than other double guns.

James MacNaughton patented the round action in Edinburgh in 1879, at a time when most guns considered the best-of-the-best still had external hammers. MacNaughton’s competitor, James Dickson, introduced his famous round action three years later. Both Dickson and MacNaughton survive today as Dickson & MacNaughton.

David McKay Brown is another skilled Scottish maker of round actions. The most beautiful round actions of all are the skeleton or bar-in-wood models, in which the stock runs all the way to the hinge pin. I used to think the Winchester Model 21 was my dream gun, but I don’t know what I was thinking—I now dream of a bar-in-wood round action.

My Ruger Gold Label was inspired by the Dickson & MacNaughton guns, although in comparison to them it looks as if it were built in shop class. You can still buy the real thing, but at a price very few of us could ever afford. Given that, how great would it be to find one in the attic? Here’s Andrew on today’s Blast from the Past:

The serial number on my uncle’s bar-in-wood MacNaughton is 9xx, which suggests it was made sometime in the late 1800s. The bar-in-wood action is beautiful, and it also has Damascus steel barrels which complete the tasteful look.

What makes this gun even more special, though, is how it came into my uncle’s possession. He inherited it from my great-uncle who had a home FFL (and also wrote a few stories for Field & Stream back in the day). This shotgun was found in a rotting crate in the back of my great-uncle’s house after he died, and no one knew exactly how he came to be the owner. Anyway, now it is a nice wall hanger, but my uncle and I are considering selling it to fund a trip to Africa.

The original James McNaughton only made about a hundred bar-in-wood guns, as I understand it, so this is a rare one, and we are lucky to see it here. Thanks to Andrew for sending this picture. Please keep the old gun pictures coming.