Blasts from the Past: R.G. Owen Springfield Rifle

This reader's vintage sporterized Springfield rifle is in incredible condition 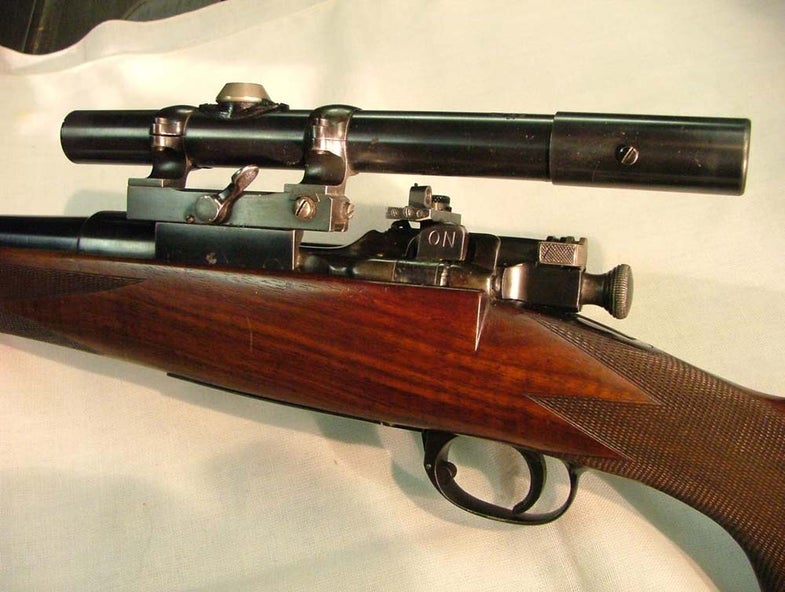 The rifle features a Lyman peep sight and a quick-detachable scope. From Todd
SHARE

We have featured sporterized Springfields in Blasts from the Past fairly recently, but I think you’ll allow one more, as this is a special one.

R.G. Owen was born in Wales in 1884, son of a stockmaker for W.W. Greener, Birmingham gunmaker. After apprenticing to a cabinet maker, working as a ship-joiner (a carpenter, but one specializing in delicate work), house-framer, and serving in the Canadian army in WWI, Owen was working in a shipyard in Alexandria, Va., when he saw a custom rifle in a store window and said to himself: “I can do better than that.”

Moving to his wife’s hometown of Sauquoit, N.Y., he went into the custom-rifle business, handling the inletting and stocking, while others in his shop did the engraving, first under the “Owen Brothers” name, although his brothers never actually joined the business, then as “R.G. Owen.” Owen preferred to work on Springfields, although he used other actions. This rifle is one of his simpler guns, without engraving or the carved arrowhead on the stock that would become his signature. It’s a beautiful rifle regardless with a Lyman peep sight and a quick-detachable scope mount. E.C. Crossman, one of the most famous gun writer’s of the era, and Field & Stream‘s Paul Curtis were Owen rifle fans. Owens command premium prices today.

This was my grandfather’s favorite rifle. It was built by Owen in Sauquoit, N.Y., and fitted with an old Zeiss scope of about 2x. It has a post and crosshair reticle that, while rather rudimentary by today’s standards, still works flawlessly. As you can see from my pictures, the rifle is in excellent shape. The trapdoor in the buttstock still has a card with Owen’s cartridge sighting instructions and recommended bullet weight written on it. Having realized what it is worth, I no longer hunt with it. Instead, I use my grandfather’s old Savage 99 in .300 Savage.

Todd, most of us would be happy just to have an heirloom 99 in .300 Savage. Congratulations on winning the grandfather lottery. My Grandfather Bourjaily, a newspaper publisher, left me a giant desk on which he spread out the day’s pages, and also a chair that fits in a corner. Grandfather Yensen, who I barely remember, left me a shaving mug. Desk, mug, and chair are not for sale—but they aren’t rifles, either. Please keep the old gun pictures coming to fsgunnuts@gmail.com..

Rifles
Blasts From the Past
gun nuts
Hunting Rifles
military