A Close Call at the Grand Canyon

It’s a long way down. I recently saw the Grand Canyon for the first time and it is by far... 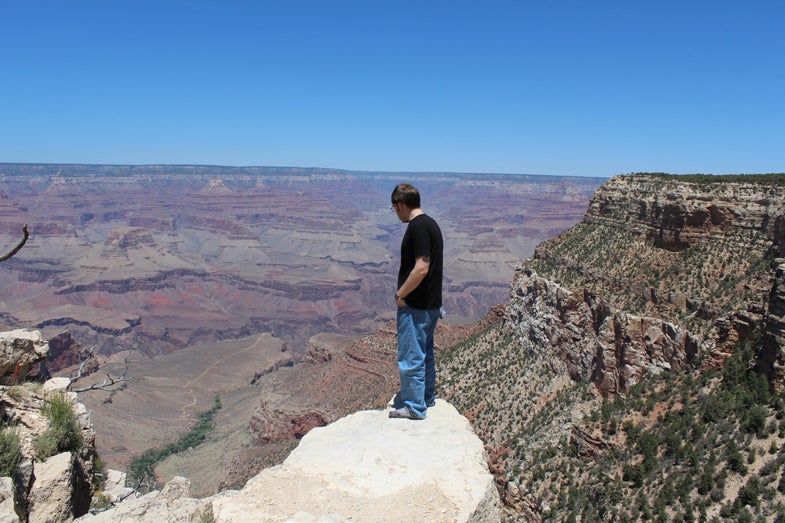 It’s a long way down.

I recently saw the Grand Canyon for the first time and it is by far the deepest hole that I have ever seen. It’s also a National Park that attracts about 5 million people annually.

The words national park have a soothing effect on people. How dangerous could a place be if it has attained that designation? They’d have put fences and guardrails around it if it were truly dangerous, right?

Actually, no. It’s a damn scary place. Michelle and I arrived at the South Rim and were quickly impressed by two things: how low the wall along the paved walkways along the rim were—about knee-high—and how far you could fall if you took a step past that wall—in some places, many hundreds of feet. A fall like that could hurt or severely kill you. But that didn’t stop people from going past the wall to get a better look. Many stood with their backs to the canyon to have their pictures taken. That made me uneasy.

The more immediate danger here, judging by the many warning signs, is dehydration and heat-related illnesses, such as heat stroke, heart failure, and extreme crabbiness. There were water stations every 1.5 miles along the Bright Angel Trail where we hiked, but there are other trails with no water whatsoever.

We descended to the first water station and decided to turn around. Yep, 3 miles (and about 1,000 feet in elevation change) was plenty for us at 7,000 feet. It’s that steep. About halfway back up, I heard Michelle gasp and point. I looked up the trail. A quarter mile away, rocks were tumbling down the canyon and people were screaming. A woman—Chinese, we later learned—had gone just a few feet off the trail, probably to get a better view or photograph. The ground gave way beneath her and down she went. Michelle said she fell head over heels two full revolutions, large rocks accompanying her as she went. By the time I dialed 911, the police already knew of the incident. The woman was incredibly lucky. She had somehow fallen into some vegetation that arrested her fall and appeared to be holding her in place. She had not been hit by the tumbling rocks.

When we arrived, a man with a cell phone in hand was relaying questions from the police to her through someone in her party who spoke English. Was she injured? Could she feel her arms and legs? We had passed some Park Service personnel doing trail maintenance on our way down. Now we could see one of them, a girl with dark hair and a silver ring through her lip, sprinting up the switchbacks below. She was amazingly fast, especially considering that she was wearing heavy duds and boots.

By then, a knot of curious hikers were starting to clog the trail, a dangerous thing in the canyon. It pushes more people toward the edge to pass or to gawk. One fall was more than enough. “Best thing we can do is keep going,” I said. We did.

We found out later that a rescuer had rappelled down, gotten the woman in a harness, and hoisted her to safety. Michelle said that at the moment it unfolded she was pretty sure the woman was at least going to be seriously injured if she didn’t fall to her death. Nine times out of ten, I suspect, such falls are fatal. There’s not a lot to stop you once you get going in the Grand Canyon.

It was a sobering experience. I’d like to think I’m old enough and wise enough to know what’s safe and what isn’t. But a reminder like that one made me pay very close attention to where I was putting my feet until we got back on top.