A Cure for Cabin Fever: Vernon, Florida, the Movie

As winter drags on and you find yourself going stir crazy, I recommend that you burn 55 minutes of your... 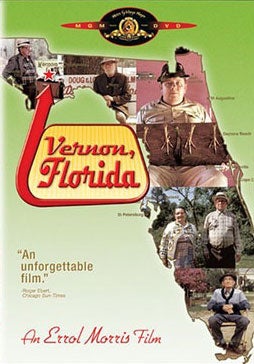 As winter drags on and you find yourself going stir crazy, I recommend that you burn 55 minutes of your precious time watching a 1981 documentary by Errol Morris called Vernon, Florida. It will drive some of you even crazier. There are no car chases, sex scenes, jokes (intentionally, at least), or murders. It’s like the line from Samuel Beckett’s Waiting for Godot: “Nothing happens, nobody comes, nobody goes, it’s awful!”

And yet it’s not. It’s strangely moving, almost thrilling. What Morris did was simply turn his camera on eight residents of a sleepy Florida town and invite them to talk. They’re all hicks of one sort or another, the kind of people it would be easy to look down on. But Morris has a way of amplifying them. They’re all parts of our own humanity. They’re weird, sure. But they’re us, too.

There is a minister who preaches at length—and quite strangely—about how Paul’s use of the word wherefore in the Bible drove him to look up the meaning of the word and trace its history. There’s a couple whose only vacation was to drive 1,407 miles to the White Sands Missile Range and bring back a jar of sand, which they believe expands over time because it’s radioactive. There are three older men who sit on the porch of a store and dryly discuss the suicide by shotgun of an acquaintance, of whom they say, “There weren’t none of his brains working. Period. And, he said, that day: ‘That’ll be the last thing I ever is to shoot myself.’ Which it was.”

But the star of the film is Henry Shipes. I challenge anyone to show me a more diehard turkey hunter. They’re a smart bird, he says reverentially. The smartest we’ve got in this country. Walking a dirt road with his friend, Snake, who never speaks, he confides, “See now, we spend time like this day in and day out and not hear nothing. But you know they’re there. Where there’s smoke, there’s fire.”

One day, Henry is out turkey hunting with some friends when he has a bout of diarrhea. He tells his friends to go on without him and pick him up on the way back. He is just getting ready to “use the bathroom” when he hears a gobble. “Boy, that’s the best diarrhea medicine in the world. You hear a turkey gobble, you forget all about diarrhea and everything. Headaches, everything. That’d cure anything.” He tells the stories of three kills and then points to the birds’ spurs and beards mounted on what looks like the side of a trailer.

He talks about how turkey hunting gets into your blood. He likens the feeling of getting close to making a kill to being electrocuted. The tension builds up to the point that it’s all but unbearable. Then, when you get right up on the turkey, you forget about it. “I mean, you go blank. You’re concentrating on the kill.” Once you’ve killed or missed, all the tension comes back. “It makes me sick,” he says, just like the dry heaves you might get on a Sunday morning after a rough Saturday night. “It’s nothing but your nerves built up that’s dying down. That’s all it is. In four, five minutes, I’m all right.”

That’s a man with turkey hunting in his marrow.