A First Knife, and Other Memories of My Father

A U.S. PAL RH 36 fighting knife, similar to Heavey‘s boyhood knife. By the time this is posted, the movers,... 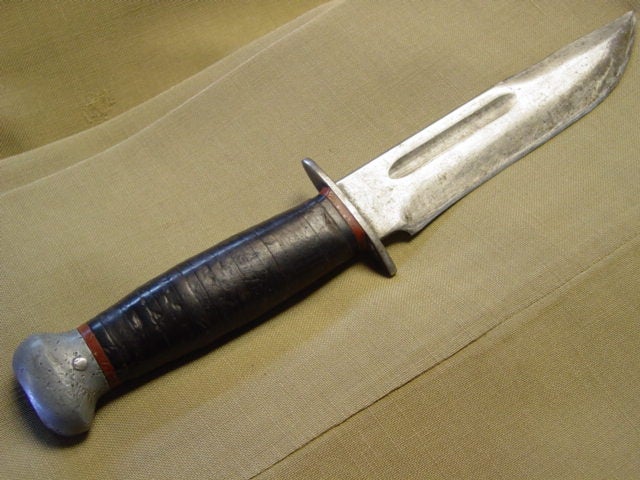 By the time this is posted, the movers, slated for 7:15 a.m., will have been at it for three hours. Right now, it’s 10 p.m. on Monday, and we are nowhere near ready, and I’m freaked out in a way known only to the utterly unprepared.

It’s because I keep running into my dad as I try to pack. He died in 2007. He was 87. I am cleaning out the drawers of his old desk, in which I haven’t looked in years. Here is a U.S. Naval Academy pennant, a narrow triangle of blue felt with “1941” on it and a golden goat with its head lowered, about to hit somebody. He was in that class that graduated six months early, right after Pearl Harbor. Next thing he knew, he was the gunnery officer on a destroyer that was escorting ships running in the North Atlantic between the U.S. and Murmansk to arm the Russians. Losses to German U-boats were heavy. It was only recently that my mother told me that for years after they were first married he would wake up from nightmares yelling, “Replace that man in the forward turret! He’s not firing! We’ve got to get somebody in there now!”

In a Roi-Tan cigar box in the drawer I find the sailor hat he likely wore during his plebe-year cruise, a tradition at the Naval Academy. Inked inside is “64A HEAVEY.” There are one-peso and ten-peso notes issued by “The Japanese Government.” And the box is full of campaign ribbons I can’t decipher. Wide and narrow bands of color, a coral snake on hallucinogens. I wish I could read them.

I look at this stuff and remember him when I was 10, an age at which a boy’s father has not yet lost his godlike aura. I remember his taking me to Super Surplus on Wisconsin Avenue in Bethesda, Maryland, to outfit me for my first sleep-away camp. We were supposed to bring a fixed-blade knife, and I was stunned when he picked out what looked like the biggest one there, with a stacked leather handle and a 6-inch blade. I now know it was in the style of fighting knives that troops in the Pacific often carried.

I remember my mother’s face when she saw it. She gave him a what-in-the-world-were-you-thinking? look, but he shrugged it off.

And the thing is that it was actually a pretty smart move on his part. Boys underestimate the danger of small knives. They cut toward themselves. They try to do delicate work with them, then slip and cut themselves. But they respect large blades, especially, for example, one long enough to go all the way through them. With a knife like that, you’re not tempted to dig out a splinter or clean your nails or open a letter. You’re much less likely to hurt yourself or others.

So, at a time when I should be packing boxes, what I’m really thinking is that parents everywhere who are considering buying their son or daughter a first knife should know that buying a big one is the way to go.