A Shed for My Head

I took a holiday from packing moving boxes the other afternoon. I did this because just seconds after having packed... 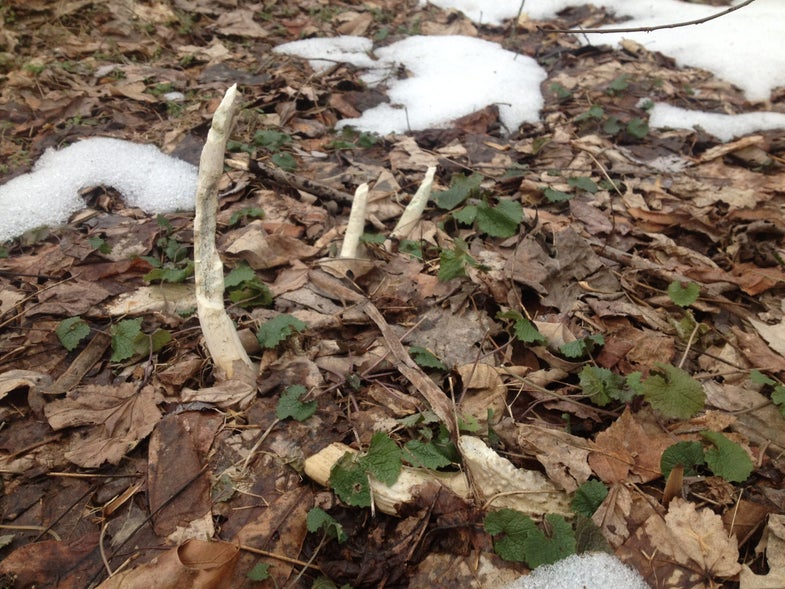 I took a holiday from packing moving boxes the other afternoon. I did this because just seconds after having packed and sealed another box, I would realize I had no idea what it contained. It could have been books, shoes, or exploding grapefruit. It was all the same to me. So I would simply label the box “Stuff from _______’s Room.” In short, I was losing what’s left of my mind. I would happily have set fire to the house and walked away. I don’t know how much insurance we have, but at that moment I didn’t really care.

I persuaded Michelle to come with me for a walk in the woods. “We’ll go look for sheds for an hour,” I said. “Then we’ll come home and renew our efforts.” We chose a nearby ridge, much of it still covered in the last few of the 30 inches of snow we got last week. On south-facing slopes we found places without snow. Some were bedding areas where you couldn’t take a step without landing on a pile of deer pellets. Others—nearby, equally sheltered, seemingly just as attractive in every respect—had no deer sign whatsoever.

We followed trails in the black earth beneath the pine needles. Some were obviously new and heavily used. Others were older and had not seen a hoof in quite some time—to my eye, at least. We walked them all. It was quiet except for the wet crunch of the snow and the sound of the streams, running high with snowmelt, on either side of the ridge. I liked this. It beat the hell out of packing boxes.

If you have to find sheds to enjoy shed hunting, you’re setting yourself up for a lot of grief. I wanted to find one, of course. Something comes over me when I stand in the spot where a buck has dropped an antler and I hold in my hand the miraculous head bone that grows back annually. For me, it has to be a fresh shed, a this-year’s one, to count. I am at a loss to explain this. Old sheds are like—I don’t know—kissing your sister or having pot roast for the third dinner in a row. Sure, one’s a kiss and the other is dinner, but also not.

So, naturally, an old shed is what I found. But not just any old shed. Mine was a 4-pointer buried deep enough that it looked to be at least a couple of years old, possibly older. And, of course, in an area where I’ve been shed hunting intensively for two years running. There was some snow around it and some garlic mustard, an invasive that was brought here in the 1860s as a “culinary herb.”

I looked at it, wondering how I’d just now found a shed that I must have walked by four times in two years atop the ridge. How was it that there had to be fresh sheds somewhere—Paula Smith has already found about seven just 75 miles away in D.C.—but I couldn’t find a single one?

Because that’s how nature works. It couldn’t care less about my shed-hunting logic or my hopes and aspirations. It has a deeply impaired sense of fairness. It sometimes rewards hard work and just as often looks the other way. It is indifferent to suffering, ambition, vanity, and overconfidence. It knows that one day it will get my bones, too. And that is more or less what brings me back to ridges like this one when the walls of my life start closing in too far. Like when I’m packing boxes.