A Tiny Victory for Freedom

The most useful knife I own doesn’t look like a knife. At first glance, the untrained observer is more likely... 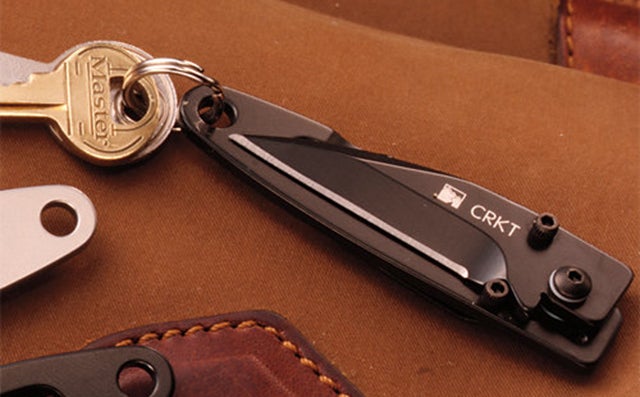 The most useful knife I own doesn’t look like a knife. At first glance, the untrained observer is more likely to see it as just another key or a money clip on my key ring. But the little thing unfolds to deploy a handy 1 ¾-inch single-bevel Wharncliffe blade (flat edge, no upsweep at the tip). It’s a CRKT P.E.C.K. (Precision Engineered Compact Knife) and has sliced into more of those horrible blister packs than I can count. It has divided many a last slice of pizza under the stern gaze of two squabbling children. I once used it to reduce a refrigerator’s cardboard box to something easily carried under one arm, in less than a minute. The best knife is the one you can put your mitts on when you want it. With the PECK, if I can find my car keys — which often takes me only 1 to 4 hours to do —I’ve got a knife.

The only downside is that it’s so small I can forget it’s there. Until I’m passing through airport security. Sometimes I remember to take the thing off my key ring before leaving the car. But sometimes I don’t. In the last decade or so, I’ve forgotten to do this about six times. Three times, it has gone through TSA inspection undetected. (And done so both going and returning, which is something I can’t begin to explain.) The other three times, it has been found by a TSA inspector. When this happens, the agent takes it to a secure location, and drops it into his own pocket. Then, once a month, all the local TSA inspectors get together at a cookout to play Who Got the Coolest Knife This Time. Each time, I’ve had to replace it.

So it was with no small sense of alarm that I realized just the other day that the blade was still in my possession just as the airport shuttle bus opened its doors at stop 18 in the Green lot at Dulles International Airport.

There was no place to stash it in the little shuttle-stop shelter itself. (I’m convinced these structures are built by the same company that makes those one-piece, sink-and-toilet-bowl units they put in prison cells.) With just a moment to make a decision, I slid the knife under the concrete bumper of the parking space nearest the shelter.

As the bus lumbered into motion, I ran the numbers. There was an even chance it would make it through security. And, given my state of mind at 10 p.m. on a Sunday night after a busy weekend, probably a somewhat less than even chance that (a) I would remember that I’d hidden my knife, (b) that I’d remember where I’d hidden it, and (c) that it would still be there.

I was okay with this. I’ve donated so many blades to the TSA over the years that it has changed my priorities. Sure, I’d like to keep my knife. But the main thing is that the TSA not get it. Better to see it lost or destroyed than to fall into enemy hands.

Anyway, at 10 o’clock last night, I got off the shuttle bus, made as if to tie my shoe while the other travelers at my stop headed toward their vehicles, slipped my fingers beneath the parking bumper, and retrieved my knife.

Another tiny victory for freedom.