Like most people, I spend a fair amount of time feeling sorry for myself. I figure it’s an important job,... 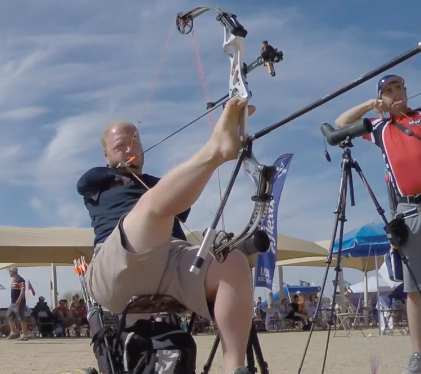 Like most people, I spend a fair amount of time feeling sorry for myself. I figure it’s an important job, and if I don’t do it, who will?

I feel gypped, for example, at not being born into wealth, which is the best and quickest path to that particular destination. Also, my back hurts when I wake up. I screwed up my rotator cuff shooting my bow last fall and if I don’t get serious about rehab—a physical therapist gave me a series of weird stretches and stuff that is supposed to help—I’ll be shooting a crossbow come deer season. Oh, I almost forgot. My car’s brakes have developed an expensive-feeling shimmy. As you can see, I’ve got a lot of excellent reasons to feel sorry for myself.

So I was more than a bit disappointed when somebody sent me a link to the a video of the “armless archer,” Matt Stutzman. He had it sort of rough himself, in that he was in fact born without arms. He was normal in every other way, but his birth parents, fearing they weren’t up to raising an armless son, put him up for adoption at 6 months of age. The couple who adopted him were loving people who, when Matt had a problem, generally let him figure it out for himself.

Today, Stutzman’s only disability seems to be a total lack of self-pity. He likes to hunt and fish and can use a rifle and a fishing pole. He brushes his teeth, peels a banana, answers email—pretty much everything I do—with his feet. At 16, he was told he was ineligible for driver’s ed or to apply for a driver’s license. Two years later, he was driving. Legally.

In 2009, he tried shooting a compound bow. He dug it. He dug it so much he started competing. Long story short, the guy is now training in Colorado, where he hopes to make the U.S. Olympic team. Not the Paralympic team. He wants to be the best in the world, period.

He shoots from a sitting position, nocking his arrows nimbly with his right foot. He then clips his release—harnessed to his right shoulder—onto the string, comes to full draw by pushing his right leg forward into the bow grip, settles in, and sets off the release with a movement of his cheek muscle.

There’s a recent video, from April 12, 2015, of Matt competing in the Arizona Cup*. It has more than a million hits on the USA Archery Facebook page. But here’s one—far older, from 2011, with just 10,000 hits—that may be even more remarkable. It’s called “Armless Guy Changes the Brake Pads on His Car.” The most striking thing about it is how matter-of-fact Stutzman is about it. He doesn’t think there’s anything extraordinary at all about an unassisted armless guy jacking up his own car, removing the lug nuts—and picking them up with his toes as they attempt to roll away—removing the tire, and removing the brake pads. If anything, he seems a little embarrassed, as if people might think he was trying to show off.

It’s presented so casually that it’s misleading. It’s easy to forget that what you’re watching is a demonstration of incredible human willpower, resilience, and character.

And the video is absolutely lethal on self-pity.

* Click here to see the USA Archery video of Matt Stutzman in Arizona.