Here’s some remarkable news. I went out on a rockfishing charter last Friday and—cue the trumpets—brought fish home. There were... 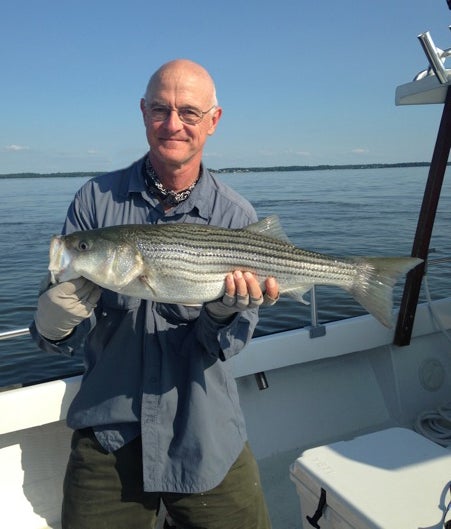 Here’s some remarkable news. I went out on a rockfishing charter last Friday and—cue the trumpets—brought fish home. There were six of us on the boat and we landed 10 fish (the limit is two rocks per angler, 20 inches minimum), so everybody went home with about 5 pounds of fillets.

Having whiffed on an earlier charter, I’d come prepared. I’d borrowed a Penn Power Stick and an Okuma Convector reel spooled with 30-pound mono from my friend Gordon Leisch. One consequence of coming prepared is that you still aren’t prepared. I was told to leave this rig in the car. We’d be using the boat’s rods—medium-heavy Ugly Stiks, spinning reels spooled with 14-pound mono, and 12-pound fluorocarbon leaders. We’d be drift fishing, bouncing eels off the bottom on 2-ounce ball sinkers.

There was a lot more finesse to this than I’d thought. The fish were—as every critter in nature worth bringing home generally is—on the edges of things. In this case, it was humps and dropoffs. You’d be in 12 feet of water one moment and in 32 feet the next. And you weren’t going to catch them if you weren’t on the bottom. So you had to pay attention.

“Everybody on bottom?” the captain would call from the wheelhouse, glancing at the fish finder. “Fish right under us.” He didn’t always get a response. There were several reasons for this. Two ounces isn’t a lot of weight. And, since the bottom was rougher and smoother in different places, contact didn’t always feel the same.

Over the day, I actually became one of the better anglers at sensing bottom contact. When I wasn’t sure whether I was down, I’d open my bail. If line peeled off fast, I wasn’t down. I’d let it go until the rate of peel slowed. If it peeled more slowly from the get-go, I was. Also, whenever it felt like the depth was going up or down, I wasn’t shy about verifying this by calling to the captain.

My first fish wasn’t big, maybe a few inches over the 20-inch minimum. But it fought hard and guys clapped me on the shoulder when I hoisted it aboard. I was happy just to have broken my jinx. A few hours later, I hooked into something much bigger and was finally bringing it in when the line broke. Later, I missed a jolt of a bite. Then something solid took my eel. This fish felt a good deal larger and started taking line. When I brought it boatside, my buddy Patrick O’Neill netted it. The only downside was that somebody else had hooked up 30 seconds after I did, so neither my fish nor I were accorded the adulation we clearly deserved. It went into the box without so much as a victory photo.

I didn’t get home until 9 p.m., at which point I fired up the skillet, sauteed some garlic in about half a pound of butter, and threw a fillet in. Six minutes later, the fish seemed close to flaking, so I took it off the heat, covered it for another minute, and slid it on a plate. The firm white fish practically fell off in meaty, bite-size chunks. I suddenly understood why rockfish sells for $25 a pound at the supermarket. It was terrific.