Death, Grace, and Two Bluegills in the Same Week

I buried two of my closest friends within 10 days of each other this summer. This made me feel old,... 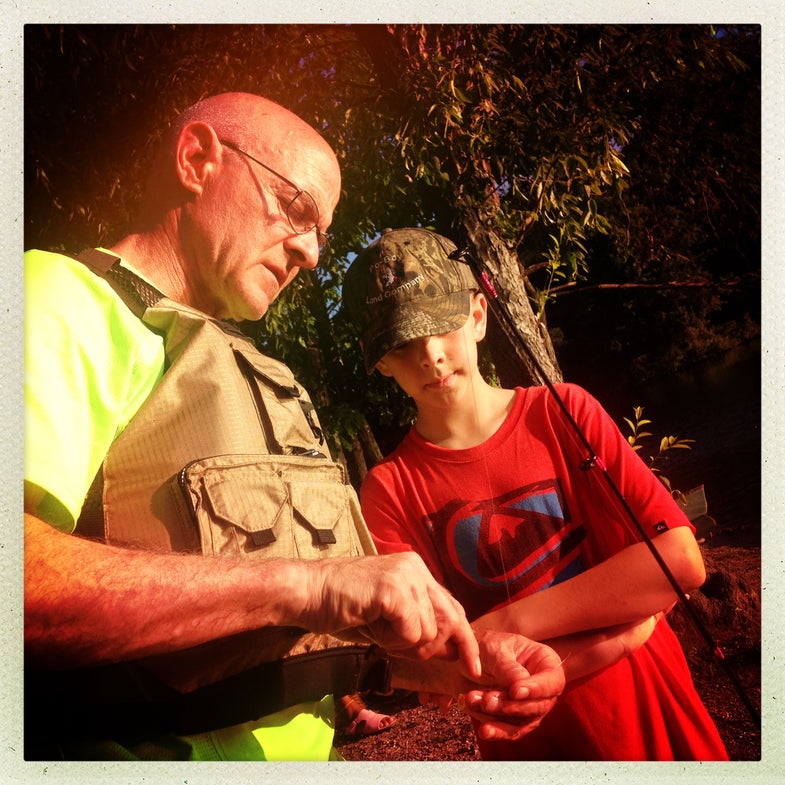 I buried two of my closest friends within 10 days of each other this summer. This made me feel old, sad, and—for reasons that are difficult to explain even to myself—in need of redemption.

But I got lucky. Because if I do nothing else of consequence this summer, I put a fatherless boy onto his first fish. The boy was so excited when the bobber went under the first time that he almost swamped the canoe. Far too excited to manage the twin tasks of keeping tension on the fish and reeling in at the same time. Once the bluegill was hooked, I had him focus on reeling. And then I was showing him how to smooth back the dorsal fin so the spines wouldn’t stick his hand. His entire being hummed with life and awe. He had cracked the membrane between worlds. He had reached beneath the water with a hooked worm and pulled another being from that world into his. He had caught a fish. He touched the fish, and we threw it back. The next evening, he caught another.

Tommy was the friend from school that Cole, 9, invited along on our annual car camping trip to Codorus State Park, about an hour’s drive from home. He was the overly quiet and watchful sort you become when your mom is in and out of treatment centers and you can’t remember if you’ve ever seen your dad and you mostly live with your grandparents. Who may or may not be delighted to have you and your younger brother around.

I liked Tommy. I wanted to loosen him up, to show him that he didn’t have to be on guard every minute. I did this by pretending I was going to throw him into the campfire, pretending that I was highly offended when he pointed out that I was bald, and picking pretend fistfights with him that he always won. I also took him and the other three boys (Jack, my older stepson, had also brought a friend) fishing down by the boat ramp each evening.

Of the four, Tommy had the greatest desire to fish. But the boat ramp is tough fishing. Too much pressure, too many kids splashing around. I put Cole and Tommy in the canoe and rowed them to the far side of the lagoon. Cole’s first cast snagged high in a tree. I told him to let Tommy try before we went to sort him out. That’s when it happened. Five seconds after it landed, Tommy’s bobber quivered, quivered again, went under and back up once, and then went under deep. “Set the hook!” I said, forgetting that he probably didn’t even know what that meant. “Just crank that reel.” He cranked away, his eyes on fire. And then I unhooked the fish and he touched it and we threw it back. Then we high-fived. “You did it, dude!” I said. “You just became a fisherman.”

I couldn’t stay the whole week. But Michelle told me that on the way home, she asked each boy what he remembered best from the trip. Tommy said that it was catching two fish in the same week.

Hearing this, I nearly burst into tears. I’d been thinking about Jack and Jim, how I could no longer call either up and tell him about some stupid thing I’d read in the news. That—more than anything else—was how I knew they were truly dead. On the other hand, I’d had one small moment of grace. Maybe that’s the only defense against death that any of us has.