Illustration by Jack Unruh Disclaimer: The website that hosts this blog routinely posts videos related to hunting and fishing. These... 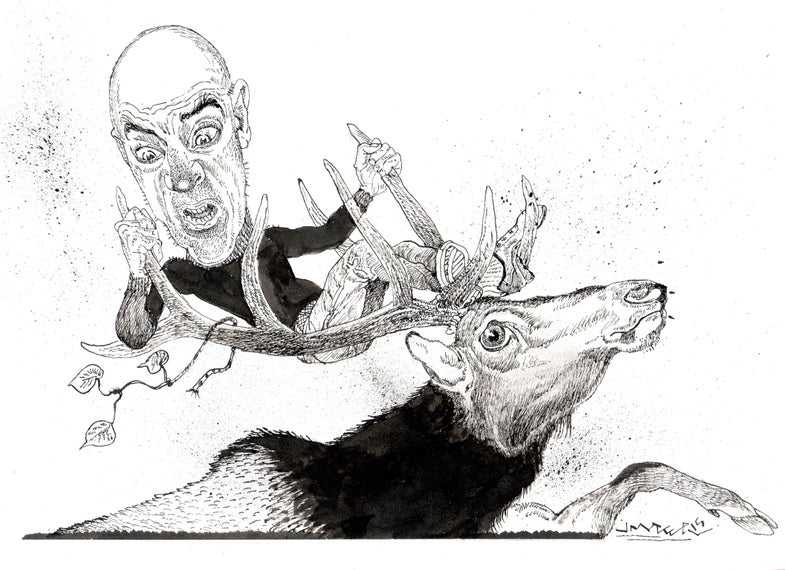 Disclaimer: The website that hosts this blog routinely posts videos related to hunting and fishing. These are understandably popular among many readers. What follows represents neither the editors’ views nor those of Bonnier Corp. It is, rather, a rant by an old, bald, and hopelessly behind-the-times guy who is also a hypocrite who would deny, recant, and denounce every word of it for the right price.
* * *
If you ever see me in the woods or on the water with a GoPro strapped to any part of my anatomy, please coldcock me. It shouldn’t be hard. Like every other fool with one, I’ll be so engrossed in the camera that I’ll never see it coming.

Why am I asking you to do this? By way of explanation, let me recount a recent tale from a magazine. Seems there was this professional mountain biker and pro-staffer for GoPro. He and another pro-staffer had just completed two days’ worth of filming in backcountry Idaho—you know, screaming down rocky trails, doing wheelies on boulders, riding straight off cliffs. The usual “extreme” deal. After a grueling but productive day, he was riding back to camp.

Suddenly he notices elk to his immediate left and right keeping pace with him. He realizes that he is in the middle of a herd of about 30 elk running down the mountain. They don’t seem afraid of him. They’re just running. And, for a few moments, he’s running with them. They were gone as quickly as they’d come. Nothing remained but the pounding of hooves and the dust hanging in the golden light. It was beyond a once-in-a-lifetime experience. It was more like a once-in-100-lifetimes experience.

Except for one catch. He didn’t have his camera on, so he missed the shot. Which is a shame, of course. All the same, the guy had had a threshold experience. He’d been, however briefly, at a kind of sacred place where two worlds, two kinds of consciousness, met.

Asked to convey his feelings about the moment, he replied, “It was hell.”

He was miserable because what mattered to him was what he’d missed, not what he saw—what wasn’t there, not what was.

To me, that’s the essence of what a video camera does. It’s not just that it puts a wall between you and your experience; it’s that it reduces that experience to a commodity, something to be bought and sold.

And precisely what I love most about hunting and fishing are those moments when I lose track of myself, when the little barking dog inside my head shuts up for a moment, when I’m so absorbed in what’s going on that the moment is all there is. You can’t force those moments. The best you can do is open yourself up to the possibility of one and hope to get lucky. I do know this: You sure as hell won’t have one if a camera is there. And it doesn’t matter whether you’re in front of the camera or behind it.

Put it this way: Know what the difference between making love and making pornography is? I do. A camera.