It’s an axiom of blogging that snarkiness and outrage will take you further than civility and respect for others. Occasionally,... 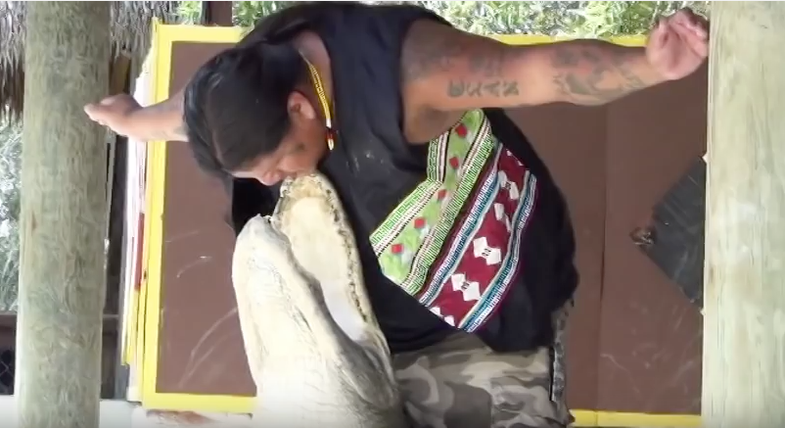 It’s an axiom of blogging that snarkiness and outrage will take you further than civility and respect for others.

Occasionally, however, respect is in order. The last practicing Miccosukee alligator wrestler in Florida is calling it quits after 31 years, according to Agence France-Presse. Rocky Jim Jr., 44, has been wrestling gators at a lean-to along the Tamiami Trail since he was 13. His father took him out into the Everglades as a boy to search for turtles. The two routinely encountered gators, and the father showed his son how to deal with them so that neither party got hurt—or mad. “Just see how they are moving,” Jim Jr. recalls his father saying. “Just read their body language.” The boy paid attention.

No one knows how long the Miccosukee and Seminole Indians have been wrestling alligators. As a money-generating tourist attraction, it dates from the appearance of the automobile in the early 1900s. The practice is in decline today. Animal rights groups hate it. Most youths can make better money working elsewhere. Potential tourists know they can see exciting videos of when gator wrestling goes bad on YouTube. And they have other places to be.

Jim, a husky (278 pounds) tattooed guy with a serious look in his eye, had been considering retirement for some time. The deciding moment took place in December, just two minutes into his regular show. He had placed his hand into the open mouth of a gator, just as he had thousands of times before. While this seems crazy, it’s only when something touches the inside of the gator’s mouth that the creature bites down. This time, Jim accidentally brushed a tooth. He described the sensation as “a door slamming on your hand. With sharp teeth.” His one hope was that the animal wouldn’t go into a death roll, the thrashing movement by which the reptiles dismantle prey too big to be swallowed whole. He figured that if that happened, he was done for.

It didn’t. He and a helper calmed the animal and persuaded it to open its mouth.

Jim has arthritis in one knee, not exactly a plus in a job that occasionally calls for cat-like reflexes. But there had been other signs, too. Driving home from a show earlier the same month, he had seen the shadow of a man by the side of the road. A few yards further on, an owl had flown across the road right in front of his vehicle. “For us, an owl means somebody will pass. And a shadow is the same thing. So when they are together, it is a bad thing.”

Still photo of Rocky Jim Jr. from a video by Pharaoh Gayles on YouTube