Who knows what you’ll reel in. You may have seen the story—on this website, for example—about three young Florida anglers... 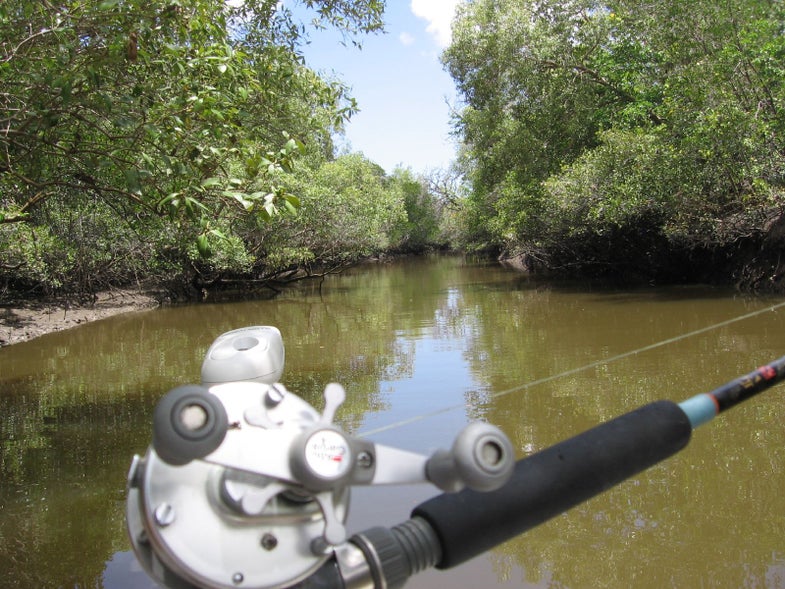 Who knows what you’ll reel in.

You may have seen the story—on this website, for example—about three young Florida anglers fishing near Waterford Lakes who hooked a big green plastic bag. Inside the bag was a partially torn WalMart bag. Inside the WalMart bag were a cocked .380 semi-auto pistol, two loaded magazines, and close to 40 bullets.

Joe Corica, an on-duty security guard, happened by, saw what was happening, stopped and intervened. Which of the following would you have said to the kids in his place?

1) Wow! That’s awesome! Do you have a lure that looks like a Hummer or something? I’ve been fishing this lake for years and never caught anything better than a slingshot. I was using a mouse pattern. A pellet gun swirled out there on my Jitterbug one night, but I didn’t get a good enough look to be sure. It coulda been a BB gun. But I had no idea there was any serious hardware in here.

2) You dumb kids! I saw you horse that thing in! There coulda been two guns in there, maybe more. But we’ll never know now, will we, because you yanked that bag in so quick that it tore. You’re lucky you didn’t rip the hook right out of that bag’s lip. And then you wouldn’t have caught anything at all. If this were a gun tournament, you wouldn’t even have made the cut. Do you even know what a finesse bait is? What’s on that rod, anyway? 80-pound braid?

3) I don’t suppose you guys have read the HOA rules about fishing the lake, but anything over .22 caliber is catch-and-release only after September 1. But, look, I don’t need the hassle of all the paperwork I’d have to do to write you up. And I’m guessing that none of you has ever done any serious jail time and would prefer to keep it that way. Right? Thought so. Tell you what. You put that little guy back in the water, let him swim away, and this never happened.

If you chose any of the above, you, like me, are not qualified to be a security guard.

What did the real Mr. Corica do? “My first instinct was to get the gun away from the kids right away,” he told Fox 35. This, of course, was the right thing to do. He then took the gun to his office and called the Orange County Sheriff’s Department, which took possession of the gun and is now investigating.

The department isn’t releasing any information about leads, but in my experience, there are only two types of people they should be targeting: criminals seeking to dispose of evidence and people who know absolutely nothing about proper gun storage.

And, just in case you’re wondering, forget about getting fishing access. I already checked. It’s a gated community. No way they’re going to let any of us in there. Which makes me sure that there’s a 1911 .45 down in that lake somewhere—probably one of those super rare ones made by Singer Sewing Machine during WWII and worth scads of dough—swimming around down there with my name on it.

Photo by Rob and Stephanie Levy