Fishing in the Rain

This is me during one of the dry spells on the Savage River. And, no, this is not how I... 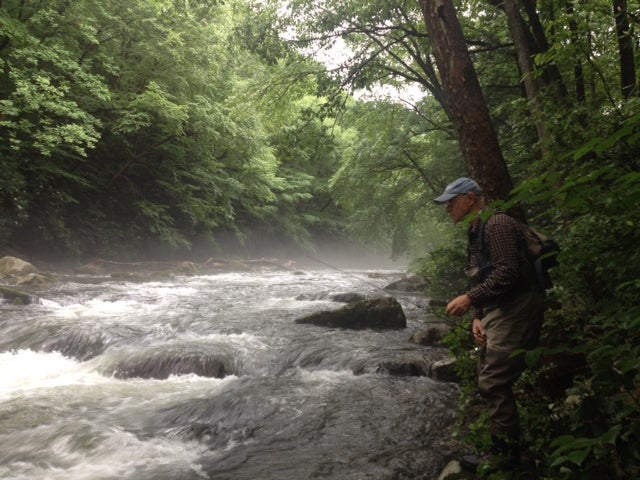 This is me during one of the dry spells on the Savage River. And, no, this is not how I hold the rod when I’m fishing. I’m looking for the end of my line, having lost my lure to a tree.

I don’t know what’s going on where you live, but it’s been uncommon wet in my part of the world. This June—which came in like a canoe and is going out like an oil tanker—has been the rainiest on record in Baltimore, with more than 10 inches so far. That’s more rain than we got during Hurricane Agnes, back in ’72. And June ain’t over yet.

The other night, I was driving back from dropping Emma off in Arlington, Va., and the rain was so furious that I would have gotten off the road if I could have. Since I couldn’t—I was on a freeway with few exits and narrow shoulders—I tried to go the speed of the cars around me. It was like being stranded inside a moving car wash. Downpours like that used to be extraordinary, a rare event. Nobody I’ve talked to seems as struck by it as me. Am I the only one who thinks something’s changing here?

The other day I called Jack Unruh, the famous illustrator (see the portrait of me at the top of this page). He lives in Dallas. I figured it had to be dry in Texas. I’ve been there. Place looks like a terrarium. The only things that thrive there have either fangs or thorns. Think Kuwait but with better barbecue. Anyway, they’re having the same weather. May was the wettest month in history. “We got damn near 9 inches,” Jack said, sounding incredulous and angry. “In Texas. In May.” May was also the wettest month on record in neighboring Oklahoma. Their 14.40 inches beat the old record by 4 inches.

Please don’t post comments below about nature’s unpredictable cycles and how this sort of thing has been going on forever. I don’t buy it. My gut tells me something big is out of whack. And my gut usually has a hell of a lot more sense than my brain.

I tried to go trout fishing last weekend in western Maryland with Dan Rodricks, a Baltimore Sun columnist and radio host. It was 200 miles each way, most of it in heavy rain. We knew it was nuts. We just didn’t know what else to do. The rain let up every so often. But we knew sunlight didn’t signal an end to the rain. It was just there to get our hopes up. And, sure enough, it never lasted more than 20 minutes before the sky got dark again and the rain resumed. Dan thought that one river might be fishable because it’s a tailwater. “If we go up close to the dam, we might have a shot,” he said.

The water actually looked semi-fishable, which was miraculous. But it was raining so hard that getting down to the water was fairly dangerous proposition. We fished a few spots. The fish were holding as close to the banks as they could get. I missed one bite and hooked a trout that was 7 inches—if that—on 4-pound mono, fishing a black twister tail on a 1/32-ounce head. By then it was raining so hard we had to yell to hear one another 20 feet away. We decided to pack it in before something bad happened.

But maybe it already has.