Frog Jumps and Baking Pancakes: A Guide to Skipping Stones

It’s now September, whose literal meaning is “Summer is over. Get used to it.” But before we dive back into... 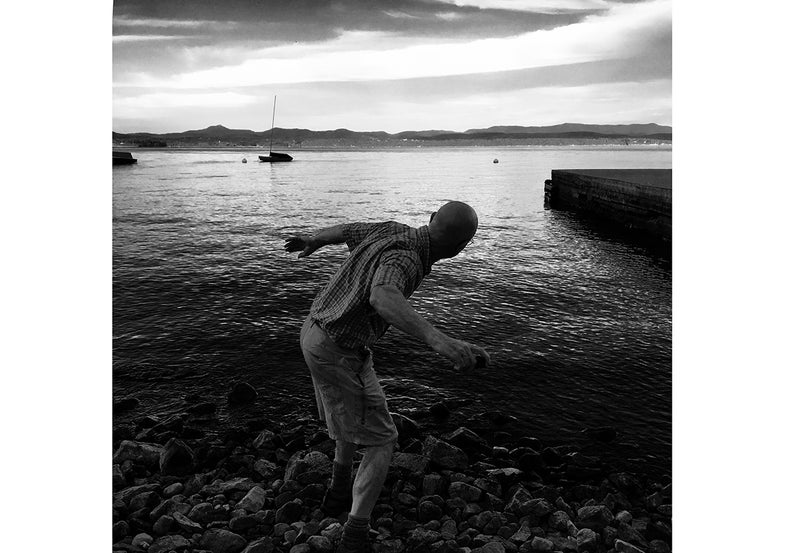 It’s now September, whose literal meaning is “Summer is over. Get used to it.” But before we dive back into the workaday world, a quick look back at one of this summer’s—and countless previous summers’—quiet satisfactions. I speak of skipping rocks. My father’s people have been going to the same area near Essex, NY, on Lake Champlain for four or five generations. (Dad was a nomadic Army brat and held the place dear because it was the only one he could count on returning to regularly each summer. Now I go.) The rocks along the shore are some kind of black shale that yields some wonderful skipping stones. I’ve skipped every time I’ve been there since I can remember.

These days I’m mostly concerned with introducing as many kids as I can to the practice. Skipping stones doesn’t appear to be a form of “learning,” which speaks to how screwed up our education system is. But it teaches kids who didn’t make the baseball team how to throw. It imparts hand-eye coordination. It’s fun and gets kids out fooling around on the water. Which is the source of some of the most wonderful pastimes on earth. Yes, skipping can lead to the harder stuff—canoeing, fishing, waterfowl hunting. All the studies show this.

While I can’t throw like the gangly demon I once was, I still do it. Not too many times. If you really zing it, no telling what might happen to your rotator cuff. Still, it’s wonderfully…grounding? (Interesting word, as if we intuitively know that good contact with the ground is a source of wellbeing.) The archaeological evidence that our ancestors were skipping rocks before the invention of the bow and arrow is slim, possibly because the dimples left on the water by a stone don’t make good fossils. But I’m convinced—as only a man with no proof whatsoever to back up his theories can be—that it might be one of the first forms of entertainment our species invented. If we could knap effective hand axes more than a million years ago, we could certainly skip rocks.

Fun facts (Well, sort of fun. Look, this is a blog. All this stuff comes straight from Wikipedia. Take it up with them if you don’t like something here. Unless I misplagarized.):

• The world record, according to Guinness, is 88 skips, set by Kurt “Mountain Man” Steiner at Red Bridge in the Allegheny National Forest, Pa. The previous record was 51. Does this number sound crazy to anybody else?

• In Scotland, they hold a championship every year in an old quarry. But they go for distance, not number of skips. The world record for distance is 352 feet and was set in Wales. But you only have to have three skips in your throw. That’s an impressive distance to throw anything. But let’s be real. This contest is not really about skipping.

• Physicists—and a surprising number of strippers and anesthesiologists—say that a stone thrown at a 20-degree angle yields the best results. It is, however, difficult to use a protractor while throwing. Personally, I also teach that your release should be at knee level or below to facilitate achieving a good angle. I have a paper on this coming out soon in a major physics publication based in India.

• The names for stone-skipping in different languages speaks to the universality of the experience and the sometimes-interesting-but-more-often-absurd ways people express themselves when they aren’t speaking English:
“Frog jumps” (Bengali)
“Making it waddle” (Hungarian)
“Making ricochets” (French)
“Cutting water” (Japanese)
“Making the rabbit leap” (Mongolian)
“Throwing a sandwich” (Swedish. And really weird, don’t you think?)
“Baking pancakes” (Russian)
“Letting the frogs out” (Ukrainian)

Okay, that’s it. Everybody get back to work.