After a spring shed season when I could have found as many antlers under my bed as I have in... 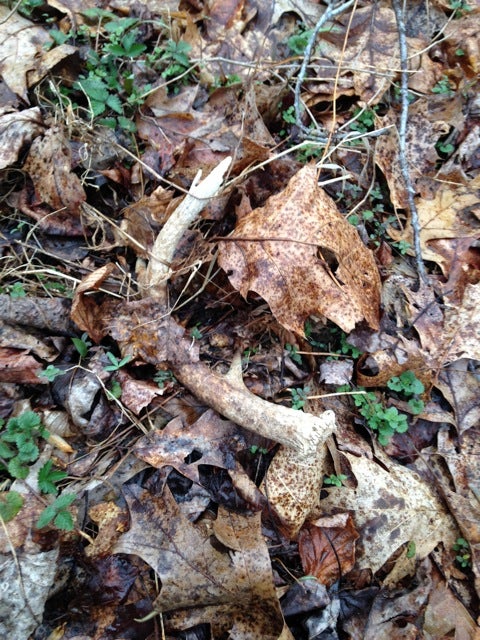 After a spring shed season when I could have found as many antlers under my bed as I have in the woods, I decided to give it one more shot last week. If this spring had been any later showing up, we’d be greeting it with July 4th fireworks. I can’t remember another when the woods hadn’t greened up by the time I’d finished doing my taxes. Standing in the gray and silent woods, you can tell it’s almost here. The trees are practically trembling with the riot of photosynthesis that’s about to break out. It just hasn’t happened yet.

Except for the invasives, notably barberry and multiflora rose in my part of the country. Those suckers have been out for weeks. Barberry (whose Latin name, Berberis vulgaris, is wonderfully apt) isn’t particularly nasty. It’s a deciduous bush with bitter berries that happen to be high in vitamin C. It crowds out native species, but at least it doesn’t have thorns. Multiflora rose is a different story. Its recurved thorns make it the plant equivalent of barbed wire. Part of the reason it was introduced here was because it makes such a good hedge. It has claimed any number of my shirts and pants over the years. If you hack at it with a machete, it just flexes and bounces back. You’re better off with a hand pruner if you ever find yourself walled in. Which can happen when the madness of shed hunting is particularly strong.

Anyway, with zero sheds to show on the year and the season nearly over, I headed out for one last shot. It’s gotten to the point where I don’t even tell Michelle I’m shed hunting. I just say I’m going out to get scratched up and see if I can’t pick up a few ticks. I loaded up on water and snacks and headed for some new woods.

And, two hours later, I found my first and only shed of the year. It was the right antler of a young 3- or 4-pointer. It’s hard to tell because the thing was about half eaten up. But the brow tine measured nearly an inch. And the G2 was every bit of 3¼ inches. The buck that dropped it did so at least three years ago by my eye. It’s unusually light and starting to honeycomb as only old bones do.

So that’s it. I’m declaring an end to the 2015 Shed Season. I didn’t finish in the money. But—thanks to one old, small, half-eaten bit of antler found in the bottom of the ninth inning—I didn’t get skunked.

That night, getting out of the shower, I also found my first tick, already pretty solidly embedded on my left side just below my ribs. I bet I was his first find of the season, too.