Me and Emma trying to chop up and shovel snow. We did this for at least five minutes​. We survived.... 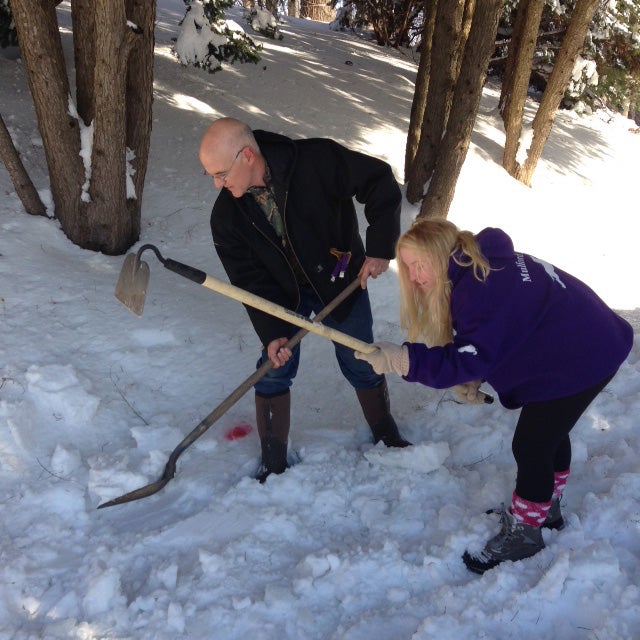 Me and Emma trying to chop up and shovel snow. We did this for at least five minutes​.

We survived. I think we got something like 30 inches of snow. One deer walked across the backyard sometime late Saturday evening, but that’s it. No other tracks. We put out birdseed and have been making up names for the ones we’ve seen: white-tufted butthead, crested mini-ostrich, helmet-headed suet sucker.

There has been no school for four days for the boys, five days for Emma. The children are turning feral and have stopped grooming themselves, and—I know this seems crazy, but it’s true—their incisors are increasing in length.

We don’t have TV in our house, just Netflix. So we took a vote about what to watch. The tally was four for The Walking Dead and one, me, for Nazi Mega Weapons. After six years of killing zombies, you’d think somebody would have figured out that a .22 LR is all you need to dispatch even the biggest zombies, and it would let you carry about 10 times as much ammo. No. Rick still lugs around that .357 Colt Python with a 6-inch barrel. It looks cool, but—wait, that’s really all that matters, right? And Daryl still thinks the ideal weapon for mowing down herds of walkers is a crossbow. Am I missing something?

We had to hire a dude in a Bobcat to dig out the driveway, which is 300 feet long. I knew better than to donate my back to science shoveling that. A kind neighbor lent me his snowblower, but using it was like trying to sand a wood floor with an electric toothbrush. There was just too much snow and too much of it had been compacted under our feet. The blower just sat on top and spun its wheels. Hiring the guy with the plow was the best $60 I ever spent.

Here, then, are some Heavey Highlight photos.

On Sunday, we filled spray bottles with water and food coloring and sprayed our footprints. It seemed like a good idea at the time:

I think the snow was at least half again this deep, but this is what stuck to the mailbox:

The impulse to have neighbors over for a cookout despite the state of the back deck is a symptom of advanced Cabin Fever: