How Not To Catch Frogs

The Walking Dead‘s Shane is one serious redneck. You know this because as early as Season I, Episode 3, he... 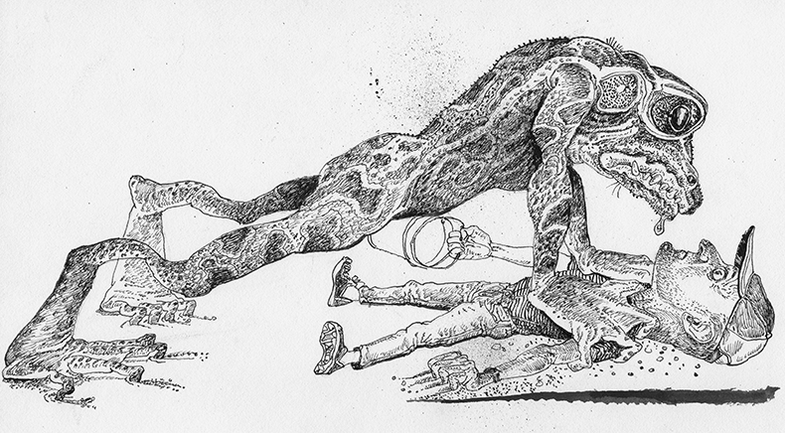 The Walking Dead‘s Shane is one serious redneck. You know this because as early as Season I, Episode 3, he undertakes two quintessentially redneck tasks: (1) Cleaning a shotgun, and (2) teaching a kid to catch frogs.

Except, this being TV, it is essential that all the details be…insane. Actually, I think they decided to give Shane a magic shotgun, because: (1) It can be cleaned without any chemicals and while fully assembled. (2) Its bore is cleared of all fouling and debris with a single plunge of the brush into the bore to a depth of 8 inches. And (3) the brush doesn’t even need to touch the sides of the barrel. With Shane’s shotgun, there is no resistance whatsoever; he inserts and retrieves the brush with two fingers, like a man working a straw into a Coke bottle.

The cleaning procedure makes for stunning television. But, like everything else in The Walking Dead, it gets better. As Shane polishes up the outside of the gun with a copper-bristled utility brush, he does what every self-respecting redneck does at a certain point during this process, which is to _lick the brush with his own tongue. _

If I did that, my tongue would look like pulled pork. And then I would gag on the residue of the Hoppes No. 9 Nitro Powder Solvent.

Not Shane. He’s good. Besides, he has other things to do. Like teach young Carl the dark art of froggin’, which in this case is so rife with crazy-pants stuff it makes the shotgun-cleaning scene look well researched.

First you need good frog habitat. Naturally. Like a rock quarry. Especially one whose waters are that antifreeze shade of green indicative of the absence of any aquatic life whatsoever. Next, it’s key to pursue frogs is when they are most active, which is in broad daylight. Finally, the real secret is that the most effective way to catch the frogs is for one frogger (Shane) to stand in waist-deep water, splash around like a Robo Duck that fell of its stick, and “herd” all those frogs into the safety of shallow water, where Carl scoops them up with every frogger’s go-to device: a tin bucket.

This is what makes The Walking Dead so compulsively watchable. To see, over and over, that fiction is stranger than truth.