How to Hunt Your Brains Out

When I had a real job, I dreamed of hunting my brains out. Now that I don’t, I think I... 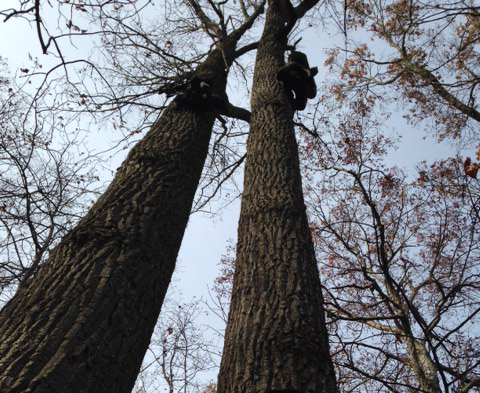 When I had a real job, I dreamed of hunting my brains out. Now that I don’t, I think I have.

The thing about being your own boss is that you pretty much know if you’re faking when you call in sick—and I’ve been calling in sick a lot lately. I’ve been hunting so much that the fine mental edge I never had but pride myself on anyway is starting to dull, or get even duller.

The other thing about self-employment, at least in my case, is that there is no responsible adult in charge. So when two highly combustible materials—the rut and an obsessed hunter—combine, you get a total meltdown.

I am hunting myself, well, sillier.

The other day I went hunting with Scott McGill on his farm. He walked me to a ladder stand in a strip of woods between two soybean fields, said he’d be 200 yards away in the next strip down, and that we could stay in touch via text. The ladder looked great but was only 12 feet high. I’d brought my climber. If 12 feet was good, 26 would be awesome. I climbed up and settled in, but then couldn’t find my phone. It took me a full five minutes to locate it—in my pants pocket, where I always keep it. I should have known to take this as a warning sign because usually I can find stuff in my own pockets within two minutes. As I removed the phone from my pocket, I decided to drop it.

No biggie, I reasoned, looking down at it. It’s not going anywhere. Then I got to thinking. If Scott texted me and I didn’t respond, he might fear the worst, come to investigate, and needlessly mess up both his hunt and mine. And might not invite me back. So I bit the bullet, left my bow and other gear hanging, climbed back down and back up again, by which time I’d climbed and descended a total of 78 feet—104 once I came down at dusk.

The next day, I was back at it with my friend Fidge. After a good evening sit, during which we’d both seen deer but didn’t shoot, we exchanged notes at our vehicles. It wasn’t until I was getting ready to hunt the next day that I realized I’d left my bow on the ground behind my car while talking to Fidge—for at least 16 hours, out in the open, just feet from the road, and clearly visible to passing traffic.

As I sprinted to my car, I was thinking, What kind of idiot forgets the most crucial piece of hunting gear he owns? I knew the answer: A guy who has achieved the dream, who has succeeded in hunting his brains out. And it’s barely mid-November.

Every year I vow that this will be the one when I finally learn from my mistakes. And every year I don’t. Right now, my only defense is stupidity. But I try to look at the bright side. Most guys don’t get to indulge in this particular form of maddness. And in just a few years, I can chalk it up to senility.