If your head is getting fat from all your whitetail smarts, I invite you to register and play a field... 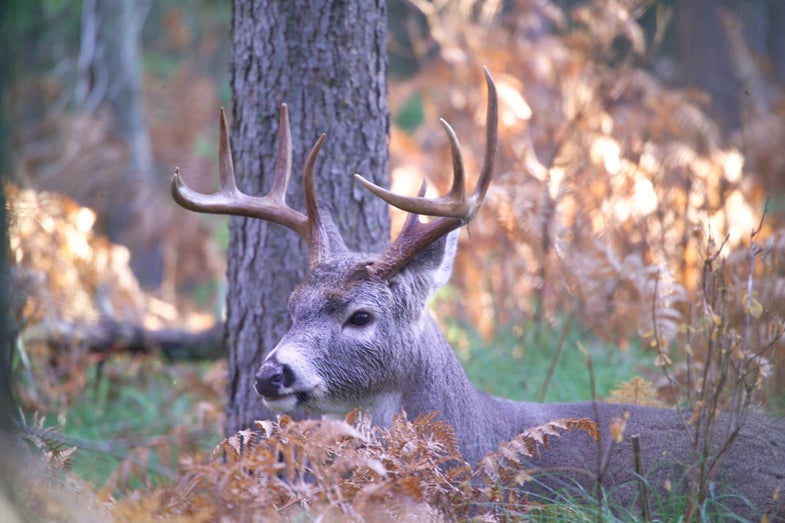 If your head is getting fat from all your whitetail smarts, I invite you to register and play a field scoring game here. It works like this: They show you a picture of a buck—they have 344 photos on file—and give you 45 seconds to score it. As soon as you make your guess, the correct answer appears and you feel cheated. Because there’s no way that score is correct. But there’s nobody to argue with, so you either keep playing or you don’t.

As we all know, the importance of being able to field score a buck’s antlers accurately cannot be overstated. Otherwise you might shoot a doe. Wait, that’s not it. It’s important because you can’t shoot anything under 180 in certain parts of Wisconsin. Not it, either. It’s important because—give me a moment—okay, I have no real idea. In my world, if it’s a big buck, my knees tell me everything I need to know.

My first game deer is a 10-pointer in southwest Kansas at a feeder. Heck, I’d shoot him. Though doing so at a feeder with all that company while they’re having dinner doesn’t seem like the most hunterly thing. Anyway, I throw out a number, 147. He’s bigger than anything I’ve ever shot but maybe not a Bass Pro store mount. And—woo-hoo!—he’s a 148! What a great game!

What I did not know is that that would be my closest score of the 24 deer I judge. There is, of course, a simple formula for field scoring. You guess the length of one main beam, the length of each tine on that side, add them up, and double it. (You double it because most trophy bucks have two antlers.) And then you add the spread, which is how wide the buck’s ass is—kidding. Actually, it’s the distance between his antlers. That gives you your answer.

Let me say this. If there’s ever a time I don’t want to be doing math in my head, it’s when I’ve got a big buck under my stand, which is usually where they are when I first notice them. I figure I’m doing well to remember that I have a bow in my hands and that I must draw an arrow back and then shoot it. Otherwise it just won’t have enough oomph to hurt anything. Unless it falls point-first on my toe. Which I am not saying has ever happened to me once in my entire life.

Long story short, I scored 24 deer in the game and had an average margin of error of 15.45 inches. Which resulted in a player score of 75.23. I don’t know where 75.23 puts me in relation to other players. I’m guessing that it’s not enough for the record books. An error factor of more than 15 inches per deer probably won’t put me among elite field scorers either. If that turns out to be the case, I’m prepared. As Abraham Lincoln wrote, “I have been too familiar with disappointments to be very much chagrined.”