It’s only a matter of time before I get arrested in an airport. I’m on my way to South Dakota... 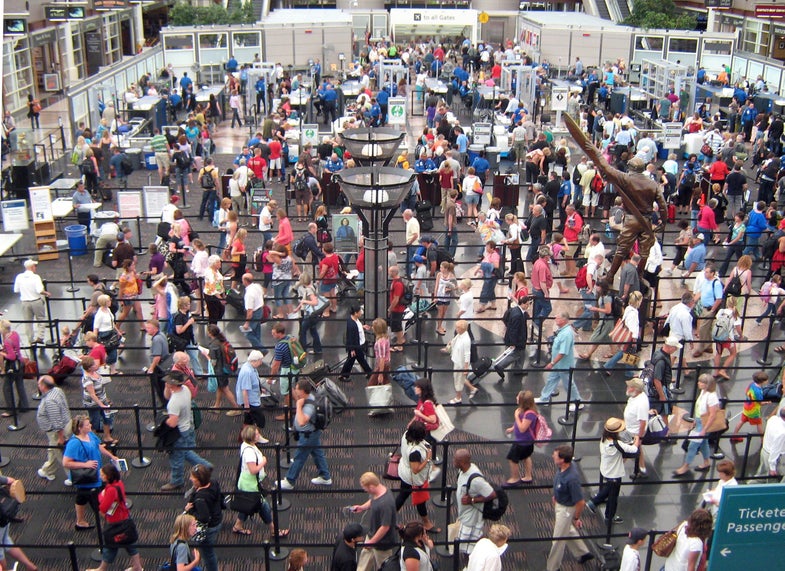 It’s only a matter of time before I get arrested in an airport. I’m on my way to South Dakota to go pheasant hunting with Jack Unruh and some other parolees. Thanks to booking on both Frontier and Great Lakes—two great airlines that don’t acknowledge the existence of each other—I got to go through security in D.C. and again after retrieving my bags in Denver.

As I waited with the other cattle in line at the Denver airport, a group of young people sauntered up a “premium passengers only” lane and breezed through. “What’s the deal with that?” asked a bearded guy in flip-flops. The agent who was monitoring the line said, “It’s some deal with the airlines. You pay extra and get through the line faster.”

This is un-American. I have no problem with the fact that more money buys you a wider seat, better food, earlier boarding, maybe an umbrella in your drink. But that’s once you get to the gate. That’s all about the airline and being on its plane. Going through security to get to the airline is the province of the American government and American citizens. It has nothing to do with the airlines. We all have to do it now that we live in the Republic of Fear. Bad as it is, we’re all supposed to be in it together. But “all men are created equal” who are “endowed with certain inalienable rights” now only extends so far.

How the hell does paying more money to a private airline entitle you to go ahead of your fellow citizens through the security that we all have to go through? The answer is that it doesn’t. It’s a rotten system and an outrage that ought to be investigated and terminated.

In other news at airport security, it now appears that I have metal in my penis. I went into the spinning phone booth, lifted my arms, and was waved out to stand on the big yellow footprints. The agent, a guy in his fifties, pointed at the image the scanner had yielded. There were little rectangles in four places: each shirt pocket, the small of my back, and the bull’s-eye of my groinal region. The machine had picked up the staple in my plane ticket in one pocket. In the other, it had picked up two foam earplugs. Since when are staples and foam earplugs the weapons of hijackers? As for the small of my back, the guy found nothing. And, apologizing and saying that he was just doing his job, he asked if it would be alright if he patted down my bull’s-eye. “Yeah, but go easy,” I replied.

He did. I was waved through. But good God, folks, what have we turned into? I keep thinking of a quote, which I’ve seen attributed to Ben Franklin, Thomas Jefferson, and Waylon Jennings for all I know. “Those who would trade liberty for security deserve neither.” I believe that. I wish more people did.