I have owned a Double Bull blind for at least three years that I have never once set up. This... 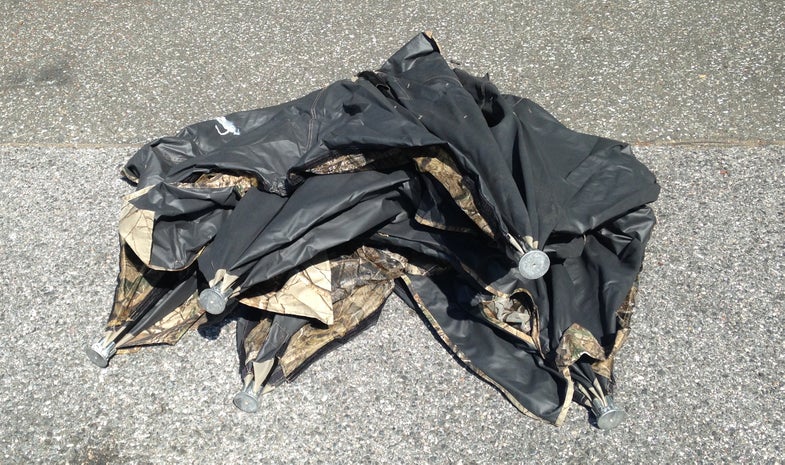 I have owned a Double Bull blind for at least three years that I have never once set up. This is not for lack of trying, but it is clearly for lack of something. And it’s become increasingly clear that it’s a lack of a particular kind of common sense rampant among otherwise highly intelligent people who have college degrees in certain fields, such English (in my case), law, and political science. Actually, we may not be “otherwise highly intelligent.” But when you can’t put up a ground blind that all kinds of guys on YouTube can in about 15 seconds, you’ve got to console yourself somehow.

The video on Primos’ own website shows Keith Bream putting one up faster than an umbrella. The video is 4 minutes and 30 seconds long. But the actual assembly, from “Go get your blind…,” starts at 1:02. And by 1:44, it concludes with “Your blind is now assembled.”

In my attempts over the years, I have enlisted the aid of people who should know better. My friend Gordon Leisch, who just turned 80, couldn’t figure it out. But he took it to his nephew, Hank, who shoes horses for a living and loves to hunt, who did it in no time flat. Gordon paid attention, but by the time he was relating it back to me, he couldn’t remember. The two of us worked at it for about 20 minutes in the heat out in front of his house before we gave up.

Every so often, I am overcome by new resolve and attack the blind again. I can’t get the first two legs from the same hub to push out and make a triangle. That’s the first step, and if you can’t get that, you can’t go any farther. Maybe, because it has only been set up once and then only briefly, the fabric is still too tight. In any case, I’ve now broken one of the legs, which I’ve tried to splint to a dowel. I also pushed one of the rubber-tipped legs through the cloth pocket it’s supposed to rest in when assembled.

I just went out and tried it again today. I set my computer up on a chair and watched ol’ Keith punch his out again. And despaired. It was like wrestling an octopus with rigor mortis. I put it away. But I haven’t given up. Maybe I’ll take it to my nearest archery shop, which is about 25 miles away, and see if they can do it.

But as I was stowing it on a shelf in the garage, I passed a gas can. And thought briefly about the satisfaction I might derive from torching it. The blind has to be fully assembled to hunt from. But I bet you could burn it just the way it is now—even I could figure that out.

Note: If you’re tempted to leave a comment below with a “trick” you learned, referrals to better instructional videos or manuals, or any other advice, the rules are the same as always: Post those on David E. Petzal’s blog.