New Scientific Research Reveals That Nature Is Located Outside

When it comes to stating the obvious—and then backing it up with exhaustive scientific research that proves that the obvious... 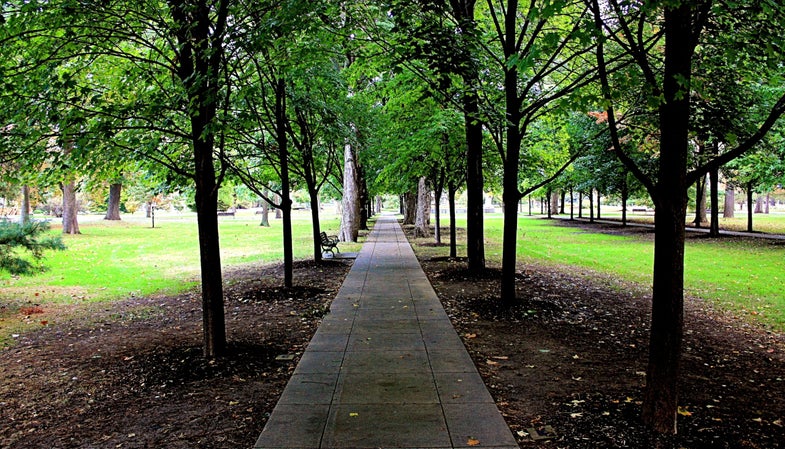 When it comes to stating the obvious—and then backing it up with exhaustive scientific research that proves that the obvious is not just obvious, but also true—it’s tough to beat The New York Times.

In a recent article, the paper’s intrepid health and fitness correspondent, Gretchen Reynolds, says that a walk in the park may soothe the mind and change the workings of our brains in ways that improve our mental health. This, she so clear-headedly maintains, is revealed by an “interesting new study on the physical effects on the brain of visiting nature.”

As an outdoors professional, I was totally hooked by this. I wanted to know more. But first, we need to review some old and startling facts that I, for one, had totally forgotten.

• Most of us live in more urban environments and spend less time in “green, natural spaces that people did several generations ago.” Easy to forget, isn’t it?

• City dwellers have more mental problems than other people. I presume she’s referring to our presidential candidates, most mass murders, and dentists.

The above facts—which at first seem totally random and unrelated—may actually have something to do with each other. That’s the conclusion of “an interesting new study” on the “physical effects on the brain of visiting nature.”

Here’s how it works. In a previous study, volunteers either walked through a lush, green portion of a college campus or “strolled for the same amount of time near heavy traffic.” And get this: The ones who walked in the green places were happier and more attentive than the ones playing in traffic. And the ones who got run over by motor vehicles, those guys were much less attentive, which is one of the effects of riding in an ambulance while receiving intravenous sedatives.

You still with me? Okay, here comes the payoff. The above study didn’t examine which parts of your brain were most active while all this was taking place. So a groundbreaking scientist decided to see what parts do get activated when a person “broods.” (Incidentally, the scientific phrase for brooding—that mental state in which we keep thinking about all the stuff wrong with us and our lives—is morbid rumination.) Generally speaking, it’s not a good thing. Further, brooding is associated with an area of the brain known as the subgenual prefrontal cortex, which is very close to Delaware.

So researchers basically re-did the study. They gathered 38 city dwellers and, once again, had them walk for 90 minutes through a leafy college campus or in heavy traffic along a multi-lane highway in Palo Alto, Calif. But this time, they hooked the survivors up to jumper cables. Okay, it was brain scans. Same idea, but lower voltage, plus you get a printout.

And—shocker alert!—the scans showed that the ones who’d walked along the quiet, tree-lined paths showed “slight but meaningful” improvements in their mental health and less blood flow to the subgenual prefrontal cortex. While the others were not only still engaged in morbid rumination but also had the same or greater levels of blood flow to that cranial region next to Delaware.

These scientific results—observing the obvious and then proving that it was obviously true—“strongly suggest that getting out in natural environments” could be a quick and easy way to improve the moods of city dwellers.

And, of course, the study also revealed one conclusion known even before the whole bamboozlement began. As one of the study’s authors stated: “There’s a tremendous amount of study that still needs to be done.”

Let’s hope they get right on that.